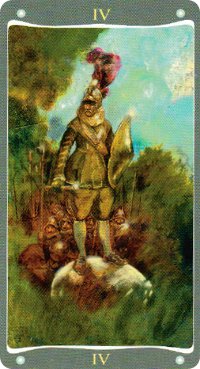 The Fairy Lights Tarot has 78 imaginative fantasy cards, created from 39 original paintings - each card is half of a bigger picture. The deck is from the same artist as the Tarot of the Secret Forest. 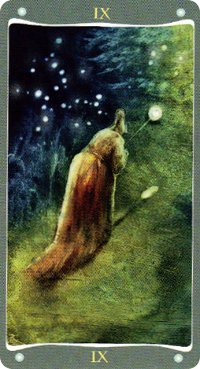 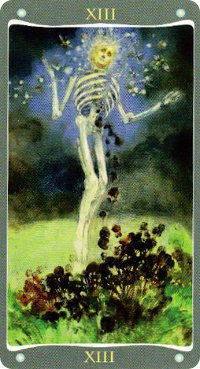 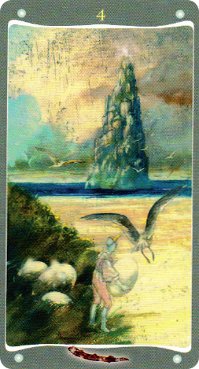 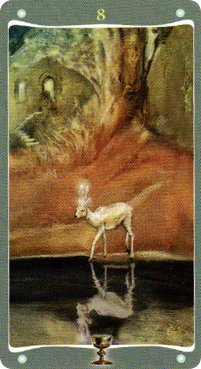 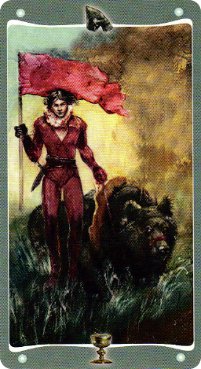 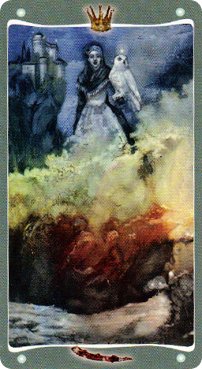 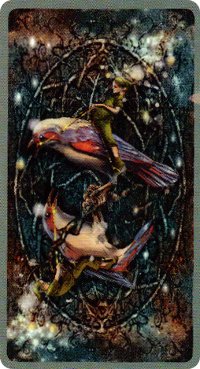 LoScarabeo has done it again and introduced a promising and creative new idea in tarot. We already know the gifted artist Lucia Mattioli from The Tarot of the Secret Forest (Lo Scarabeo, 2005) which introduced a new idea for those card back pictures, and she is the painter of this new delightful Lo Scarabeo deck as well. For this deck she has created 39 original paintings and each tarot card is one half of a painting. I havenīt had this deck long enough to understand exactly how it works but I already know that it does work. It seems to have added a whole new dimension to my tarot studies and readings.

I have been pulling a card from this deck every morning since I got it a few weeks ago and it often seems that its card pair (the other half of the painting) somehow gets into the events of the day, too. It is as if the card pairs were magically pulling each other in to re-join in some mysterious dimension, like magnets drawing each other. I have been spooked by this a few times already, in fact. I was returning home from a trip abroad a few days ago and I pulled the Four of Pentacles. Well, how appropriate; someone is coming home and his donkey is loaded with his belongings, including some gifts for those at home. (This is just one possible take on the card, of course.) I was wondering about its card pair, The Tower, though, where a lightning had hit his home. Everyone was well and everything was fine at my home as far as I knew. Well, when I was driving home from the airport I got a phone call from someone in the immediate family; a true Tower experience had just taken place, a sudden and unexpected big rearrangement at their work!

Lucia Mattioliīs artwork is very special because her brush stroke is amazingly gentle and feminine, and yet simultaneously full of inner strength and packed with feeling. It looks like the artist has really been painting with tarot in mind and she seems to have a lot of knowledge of tarot symbolism. One quickly gets the feeling she has an inner certainty of what she is doing throughout the deck. There are a few deviations of the traditional RWS symbolism here and there and I find it makes the deck doubly interesting because I think that the changes she has made are not random. In some art decks one sometimes has to suspect that a painting is occasionally made to represent a certain tarot card just because no other picture was available. Well, not here. Each change in the traditional meaning feels intentional and well thought out.

Each time you pull just one card from this deck you are also reminded of its other half which is somewhere there in the deck. Sometimes the card and its other half have opposing meanings (Fool and the Ten of Pentacles; home base vs adventure) and sometimes they seem to reinforce each other. Some card pairs do not seem to be connected at first, but when you study them in depth they begin to reveal their stories and you get a glimpse of what is going on. Two of Wands and Seven of Pentacles is an example of an interesting pair where the cards seem unconnected on the surface but when you stay with them for a while you begin to hear questions: Why has the girl turned her back on the caravan? Are they going separate ways after having traveled together? Did the Two of Wands bring her to where she is now? Why did he not stay with her but went on? And will the camels and their rider return when she is done with her ceremony or whatever it is she is doing? Yes, what is she actually doing?

Iīm still learning to use this amazing deck and so far I have used only very small spreads so as not to make things too complicated. But one of these days Iīll make a Celtic Cross spread and each of those 10 cards will have another half, so the spread of 10 cards will evolve into a spread of 20. I have only compared the original card pairs for now but Iīm sure most of the individual cards will form pairs and new pictures with each other and new stories can be seen when they are laid with each other in readings.

If there ever was a deck that Lo Scarabeo could have printed without borders this is it, and Iīm a little surprised they did not take the opportunity to experiment. A recent poll in the Aeclectic Tarot forum shows (once again) that borderless cards have a lot of friends. (Maybe Lo Scarabeo will try it in a Fairy Lights Mini deck? I remain hopeful that there will be one!) Card trimmers may want to sharpen their scissors for this one. However, the soft gray borders the deck now has are unobtrusive and neutral and leaving them as they are is definitely an option. I think one could even have two decks, one un-trimmed for readings and another trimmed one for meditating, journeying and for checking out the original paintings (and other card pairs) and all the stories that are hidden in this deck.

The card meanings follow the traditional Rirder-Waite card meanings for the most part but as I pointed out above, there are some very interesting deviations as well. Five of Pentacles is traditionally a card of hard times but here we see mermaids and mermen bathing and enjoying their treasures and jewelry. The Strength (number 11 in this deck) forms the other half of this painting and the Polar bear looks scary but I donīt think it will be a threat to the merpeople. Or is it? Maybe it can tear itself away from the controlling man and swiftly swim to catch the merfolk?

The traditional Card of Burdens, Ten of Wands, shows a lovely mother holding her child and it took me a while to realize how very tired and worried a young mother can sometimes be. Her face does indeed look tired and worried and so does the face of the child. So, what is its card pair the Hierophant adding to the story? Does s/he have some help and support to offer to the young mother or are there just more demands coming her way? On second or third look the Hierophant begins to resemble a bearded woman, as if she had emerged from some ancient circus or traveling show, which definitely adds more mystery and a totally new twists to the story!

Card backs are a bit on the dark side and the picture is maybe slightly fussy. The card backs show two fairies riding on the backs of small songbirds. The other fairy looks like she is pregnant and she has a crown on her head and the other fairy looks more like a male. The backs are not reversible so the Queen fairy and her bird are the upper ones. The LWB (Little White Booklet) that comes with the deck is perhaps better than the average Lo Scarabeo LWB, but there is not very much space for each card due to the insistence of including multiple languages in the booklet.

I still have to figure out why some of the court cards are part of a same original painting and why they are put together but at least two of the Knights (Cups and Pentacles) are easy to see as a pair. Both are a part of a painting where they are attacking each other in a duel. In this deck the Pages are called Knaves and they are all males as far as I can say so that makes most of the court cards males. Only the Queens are female amongst the court cards.

The deck has already given me many chuckles and lots of fun moments of revelation. One of the meanings for the Two of Pentacles in my old tarot notebook is being between rock and a hard place. And when you put the two cards together and look at the original painting the creature is indeed standing between a rock and a big mound of hard earth!

The traditional meaning for the Three of Swords is heartbreak, betrayal and pain. In this deck the card is a really beautiful and serene scenery by the waterīs edge. It is paired with the Ace of Pentacles. I do not see anything of the original betrayal or sorrow in the scenery. Maybe there is some sadness in there but then again maybe not. I think that all the cards and their stories are well thought out, however, and there seems to be a reason for most changes and deviations from the traditional meanings that have been made. Art is based on intuition and intuition has a logic of its own.

Many of the stories that unfold in the cards are a true source of joy and discovery for the reader. This deck has got an amazing amount of Gate Cards, i.e. cards with portals, doors and gates that possibly lead to other worlds. There are many Stage Cards (someone is standing like on a stage) and many cards show special Power Objects, such as pearls, red flags, knives and bird eggs. I think this would be an excellent deck for the more advanced intuitive reader and for anyone wishing to boost their intuitive side and get some new air under their wings in working with tarot.