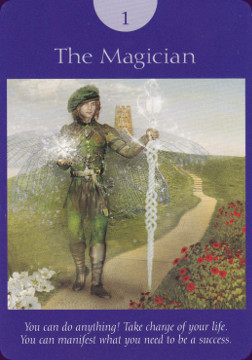 The Fairy Tarot Cards is a full 78-card tarot from Doreen Virtue, with detailed old-style fairy artwork by illustrator Howard David Johnson. There is positive, pro-active wisdom at the base of each of the 78 cards, and a detailed 185-page companion guidebook is included in the set. 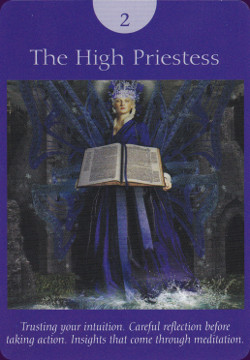 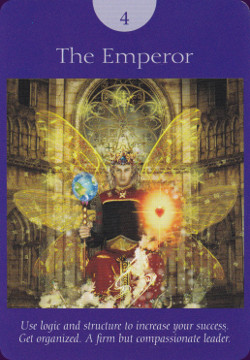 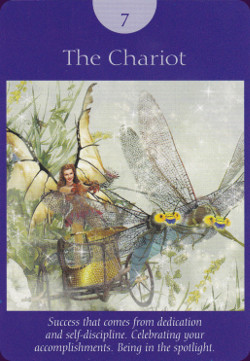 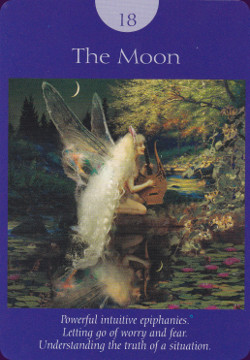 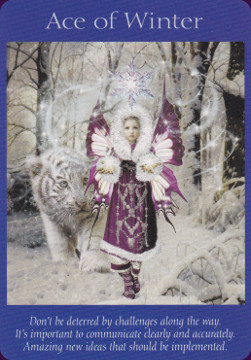 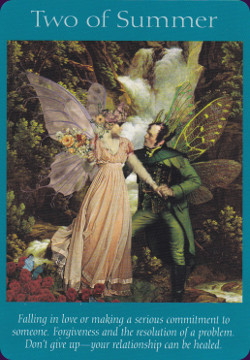 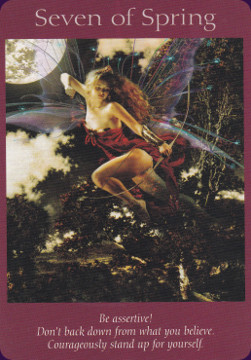 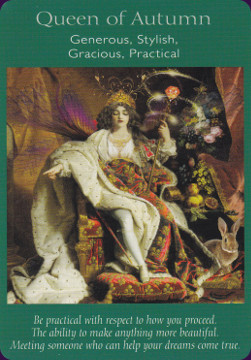 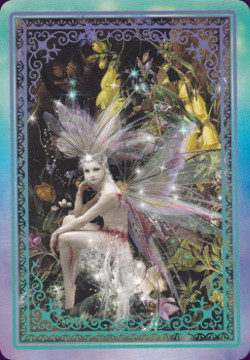 Of all the oracle card decks and tarot decks created by Doreen Virtue her creative partners, the Fairy Tarot is without doubt the most visually stunning deck of all. This is due in no small part to the gorgeous artwork by noted illustrator Howard David Johnson.

The images are staged at the ancient monument and mythical epicentre of Glastonbury. And these are fairies not faeries – the distinction is important. The fairies depicted in the Fairy Tarot are benevolent "nature angels" – the pretty, sparkly, and somewhat childlike beings that populate children's stories and (yes) fairytales. There is no moral ambiguity, no malice, no darkness and no complexity with these sweet creatures. Familiar here are the deeply romantic images of fairies in sumptuous historical dress, with the occasional modern interpretation popping up – fairies with 40s-style pinup girl faces; and scantily clad ballerina/gymnast types posing with that effortless lightness that only the super athletic can achieve.

All the cards in this deck are beautiful but the suits of Autumn (Pentacles) and Winter (Swords) are exceptional. The Fairy Tarot has been created with the express purpose of helping the Seeker to improve their self-confidence, self-esteem, and fulfil their life's purpose.

This is a fully illustrated 78 card deck, with 22 Major Arcana 56 Minor Arcana. Several Major Arcana cards have been renamed – The Hierophant is now Unity, The Hanged Man – Awakening, Death – Release, Temperance – Balance, The Devil – Ego, The Tower – Life Experience, and Judgement is now Renewal. As you can see these renames have maintained the essential meaning of the card. Justice is placed as the 8th card and Strength is placed as the 11th card.

The cards measure 87 x 127 mm which makes them quite broad, and users with small hands may have some trouble handling them. The density of the card-stock will only compound this problem as the cards stack up at 35mm which makes this an overall large and hefty deck. The card-stock otherwise is high-quality, flexible, smooth with a highly polished sheen. The edges have been finished with eye-catching bright silver gilt, which is first rate – it does not tarnish or wear off with frequent handling.

Aside from the fact that these cards are a heavy handful they are otherwise easy to shuffle. Anyone who has difficulty handling them can still "stir" the deck on a flat surface without issue. As with all Doreen Virtue decks, the print quality is very good – the images are clear and crisp, the integrity of the art has been maintained, there are no misprinted images, no blurring and no colour bleeds.

The illustrations are by prolific American artist Howard David Johnson, whose subject matter focuses on mythological, historical, and religious imagery. His style is photo realist and he works in a mixed media – digital collages, oil paints, and digitally enhanced images. His palette tends towards the Pre-Raphaelite – rich natural colours.

The print on the back of the cards – a pensive fairy sitting among flowers, with an aqua and mauve border – is not reversible. The cards come packaged in a solid cardboard box with liftoff lid. The glossy wrapping is printed with images from the deck, as well as information about it, and its creators.

The 185 page guidebook is written by Doreen Virtue and Radleigh Valentine. The Introduction tells us the purpose of the cards – the love of fairies, and support for the Seekers life purpose; and as a companion deck to the Angel Tarot cards (from the same creators). There is an outline of the structure of the deck which dovetails with a short history of tarot cards. The instructions on how to use the cards includes clearing the deck, preparing it for use, asking a question, shuffling the cards – this includes a prayer one can recite while shuffling, as well as commentary on "jumping cards", and choosing a card. A basic 3-card layout, as well as the Celtic Cross spread is included.

The divinatory meanings are given for upright cards only – this tarot is not intended for reversed readings at all. For the most part the meanings fall within broadly accepted interpretations especially when one reads the little afterthoughts entitled “Additional meanings of these card". However the creators of this deck have gone out of their way to interpret the cards in a positive light, in spite of the fact that some tarot cards aren't intended to be particularly positive. A deck that possesses no acknowledgement of the hardships the Seeker may face is perhaps doing them quite a disservice. How can a deck be of help to the Seeker if it can offer no warnings or give one the opportunity to change something before disaster strikes? Relentless positivity in the face of harsh reality, and denial that bad things do actually happen ultimately offers false comforts. Divinatory meanings for cards such as the 3, 7, 9 of Winter (Swords), the 5 of Autumn (Pentacles), Life Experience (The Tower) among others, inevitably exhort the Seeker to "ask God, the angels, and the fairies" to provide a sign or solution.

However if one is looking for a tarot deck that focuses on positive outcomes in readings then this is the deck to go for. The advice *is* kind, thoughtful, and helpful, with excellent suggestions and ideas that reinforce positive self-esteem, and eschews drama and negative relationships.