The Fantastic Menagerie Tarot has original artwork based on 19th century drawings by French artist, J. J. Grandville. The witty, detailed cards are based on the Rider-Waite pattern and feature fantastical human-like animals. Another deck from the very talented combination of Karen Mahony and Alex Ukolov from baba studio. 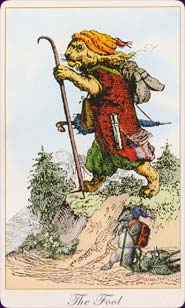 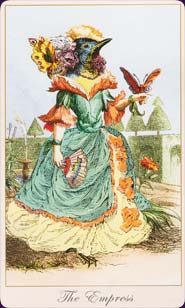 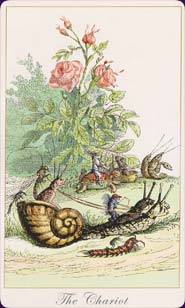 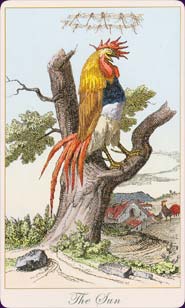 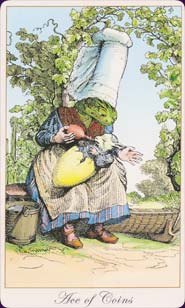 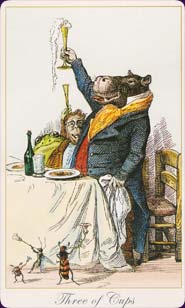 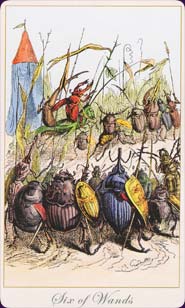 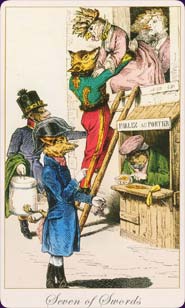 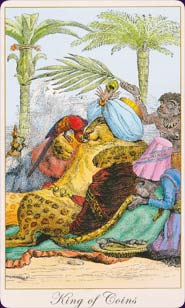 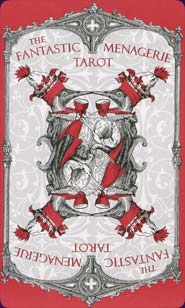 From the prolific and talented duo of Karen Mahony and Alex Ukolov at baba studio, creators of the Tarot of Prague, the Baroque Bohemian Cats’ Tarot, and the Fairytale Tarot, comes the new Fantastic Menagerie Tarot.

While at first glance it may seem to be superficially similar to the Tarot of the Animal Lords from Lo Scarabeo, this deck is a different kettle of fish (so to speak). Based on the illustrations of the nineteenth-century French-born journalist, political caricaturist and artist JJ Grandville, these cards has been created in his style, and are witty, charming, and beautifully adapted to Tarot.

JJ Grandville (born Adolphe Gerard) drew many subjects over his career, but was perhaps best known for his satirical political cartoons, “The Metamorphoses of the Day”. These were a series of political and rather scandalous lithographs from 1828, which featured the personalities of the day as human-dressed animals that best suited their character and class of society. Grandville worked from keen observation of human foibles and studies of nature, which is apparent in the skillfulness and incisiveness of his sketches.

“He delighted in the quirky, the everyday, the anecdotal events – the arrival of the first giraffe in France, the pleasures of the Parisians, crimes and scandals, the behaviour of the rich bourgeoisie, of the courts, of the Church, family life. He cast a perceptive eye on to the people of Paris and its surrounding countryside, and by turning them into animals, underlined the traits he enjoyed or deplored.”

The structure of the Fantastic Menagerie Tarot deck is Rider-Waite in style and in foundation, with a few modifications. The suits are Wands, Swords, Cups and Coins, and the majors are un-numbered (so the reader can arrange Strength and Justice in their preferred order, though they are numbered European-style with Justice at VIII and Strength at XI in the book). The faces of the cards have a thin off-white border around the Tarot scene and the title of the card at the base in old-fashioned copperplate style script. There are no astrological, Qabalistic or other symbols or distractions on the cards, just the Grandville scene and the title of the card.

The cards have a lithographic printed appearance with fine, etched-looking detail, cross-hatching and shading, and are consistent in style across the whole deck. In content they range from humourous to satirical to pointed to sweet, all in the nineteenth century style of Grandville’s time. There are country scenes of peasants, city scenes of fat and well-dressed burghers and aristocrats. The court cards picture the different social types, and the Three of Coins, for example, shows the obvious classes in sharp relief – there are two beavers diligently work on the plans and construction of a building, while a brilliantly plumaged peacock directs. All of the animals are beautifully chosen, and their stereotypical traits are linked with the appropriate human.

Some cards have been changed from the usual RWS scene, keeping the traditional meaning but expanding and further illustrating the scenes. The Three of Swords, rather than simply being a heart pierced by three swords, is a scene of three peacocks: two are together on a bench, kissing, while the third looks around a tree in surprise and horror.

My favourite cards from the deck were hard to choose, but my first pick would be the King of Cups. Here we see a crowned penguin sitting on a rocking chair on ice, cup in the hand and an egg cradled in the right. The Knight of Cups of delightfully mad; a flower-wreathed hare walks on two legs, looking drunk or dazed, eyes to the heavens. The Queen of Cups is also well-chosen, showing a swan lounging languorously o a lake-side bench seat, dressed in pink ruffles, with an attitude of extremely languid relaxation. I also liked the Four of Swords and its image of two lizards lying indolently, smoking a tobacco pipe in the sun.

Physically, the cards are the same size as most decks published by Magic Realist Press and off the same thin, flexible but strong card stock. The backs are completely reversible and have a double-ended design of the penguin from the King of Cups in muted greys and reds.

The companion book for the Fantastic Menagerie Tarot has been written by Swiss Tarotist and new Tarot author, Sophie Nussle. Inside the book, it begins with a short, factual history of Tarot, and follows with 10 pages on the life and works of Grandville, from young artist to revolutionary to political caricaturist, and beyond to how his influence remained after his death. In the next section we get to know the Major Arcana, starting with an interesting interpreted three-card reading to illuminate how the deck itself would describe the major arcana (The Three of Wands, the Devil and the Wheel of Fortune.

The card meanings for the major arcana and minor arcana follow much the same format. There is a small black and white reproduction of the card next to its title (plus number and subtitle for the majors - The Fool is the ‘Mad innocent traveller’, for example). A general description of the card’s traditional symbolism and interpretations is followed by a good list of keywords and short phrases that summarise the meaning of the card. Next is the unique addition for this book, another ‘illustration’ that brings the meaning to life - but this time through story. The major arcana stories expand on the animal archetypes of those cards, and the minor arcana interpretations also have stories, but of a slightly different nature: these are as told by an imaginary narrator, Charles, who follows Grandville through his daily life and ‘enjoys writing stories to accompany Grandville’s pictures.

“Think of the stories as illustrations, a way of encountering the cards and playing with their archetypes, characters and pictures. No one story can show a whole archetype, and so I invite you to explore these Major Arcana with your own observations and, stories and readings, as a way of seeing for yourself where the mystery ad meanings of each card lies. Every reading will give you a new story.”

The back of the book introduces details on how to use the tarot, help with reading pictures, and then how to bring it all together in a Tarot reading and Tarot ‘conversation’. There are several spreads to use with the Fantastic Menagerie cards: Three-Card, Classic Horseshoe Spread, The Humanimal Spread, and Dan Pelletier’s Chalice of Choice Spread. The sample readings have been written by Paula Goodman Wilder, professional singer and member of the Aeclectic Tarot Forum community, known for her quirky but strangely accurate readings.

The book that accompanies the Fantastic Menagerie Tarot is testament to Sophie’s knowledge of and passion for Granville’s era of French history, as it goes into fascinating detail on Grandville’s life, career, major works and his surrounding context of political life and events that influenced his illustrations. This part of the book is much more in-depth than most explanations of a deck’s concept or influences than most I’ve seen, and it gave me a fuller understanding of the times that prompted Grandville’s illustrations - and by extension, the symbology used in the cards.

The witty illustrations of the Fantastic Menagerie Tarot remain close enough to Rider-Waite symbolism to be accessible to the Tarot beginner, while the deck also offers plenty in its theme and illustrations to interest the more experienced Tarot user. I found the images engaging and with enough complexity to reveal new shades of meanings the longer the cards are used. The book is written at a slightly higher level than the average Tarot companion, but its idiosyncrasies suits the nature of the cards as well.

What? A prologue for a deck review? You’ve got to be kidding! Reviewing decks can be problematic; some reviewers would have you believe that everything that crosses their decks is better than the last, and the next one will glow with eternal holiness. But I can't do that. I look at hundreds of decks. Some nice, some dreadful, and many are just not my style. To me, endless, enthusiastic ravings about deck after deck degrade the credibility of each subsequent review.

However, every so often, a new deck crosses my desk at a time when I'm ready for… well, I'm not quite sure… something… whatever…

I suppose I was ready when I opened The Fantastic Menagerie. However I need to go a tad further than a normal review. I want you to understand why I feel the way I do about the deck, I want you to see what I see…

I always begin with the documentation, which in this case is the companion book by Sophie Nusslé. I expected well written; I expected the incredible Czech print job. Then I opened the book and began reading. And I found that I hadn't set my expectations high enough.

It’s 24 pages before we begin to explore the cards themselves – but those 24 pages captivated me, transporting me into the world of J.J. Granville, Balzac, Paris of the early to mid-nineteenth century, and human-animal metamorphosis.

Sophie Nusslé has put forth a wonderful work that does far more than ‘explain’ the cards of the Fantastic Menagerie. She entertains and transports us.

Then she takes off and begins to discuss the cards. Each card description begins with an incredible essay on the card “meaning,” followed by “keywords,” and a vignette on the “event” depicted in the card. In the essays, we are treated to a few words by Balzac, Musset, Granville himself, Dumas, Théophile Gautier, Philipon, Charton… in short, a pastiche by Sophie Nusslé, made up of "found poetry," fictional and factual pieces by authors contemporary to Grandville, historical and biographical accounts, quotes from letters and reported conversations, newspaper cuttings,1830s-40s café reviews, archives of the Geographical Society, etc. — and a fair bit of invention, all collaged together, and with very few seams showing!

The examples in the sample readings chapter by Paula Goodman Wilder are a hoot.

It is simply wonderful stuff.

And a new door in the world of Tarot opens…

When I was a child, my family had (and still has) a Mother Goose book, published somewhere between 1882 and 1907, as best as we can tell. It belonged to my maternal grandmother; I found comfort in the pictures as a child – even though some were terrifying. To me, the illustrative style was, and still remains, comfort food for the soul. And that’s what I get here; the illustrator may be different, but the general execution is reminiscent of that old Mother Goose book, and thus succeeds as Tarot comfort food for the soul.

You don’t see five coins on the Five of Coins, and the Four of Cups does not have the three and single being ignored or refused. In fact, all symbols have been removed – nothing numerical, or astrological, or hermetic, or kabalistic. Everything has been reduced to a complex sketch by J.J. Granville (with perhaps some very minor alterations). Humanities and Zoology remain.

It is a wonderful package. The book is stupendous, and the deck – fantabulous.

Especially for an ‘open up the door on the right side of yer brain and let it all hang out’ type reading; or the narrative reading style.

And if you are not a reader, what a wonderful set of graphics. Printed and finished with so much care.

And all I can do is rave like a mindless idiot – because I cannot express how the deck makes me feel…which is good. Really, really good. What a wonderful medium for Grandville’s work.

Thank you Karen Mahony, Alex Ukolov, and Sophie Nusslé, for bringing us this truly great work.