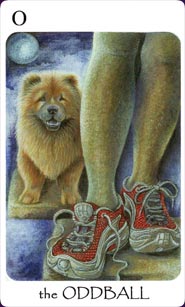 The Far Sight Tarot is a beautifully detailed, original tarot deck from Australian artist Helen Meinicke. Filled with personal imagery and meaning, the scenes are local to her home town of Brisbane, Australia. The set, with cards and companion book, was published in first edition of 50 decks in 2006, and again in a limited edition in 2016. 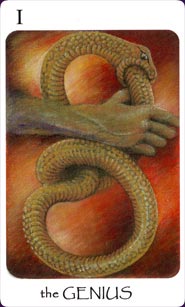 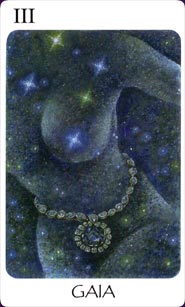 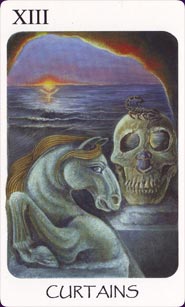 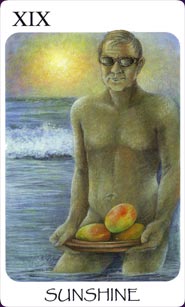 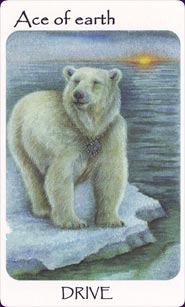 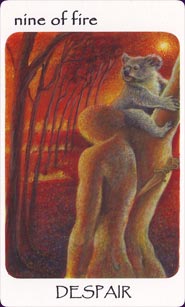 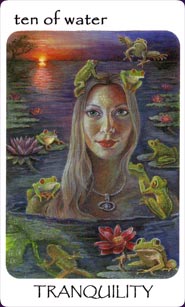 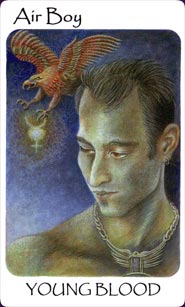 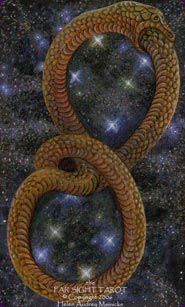 “Inspiration for the Far Sight came about by observing both the simplicity and diversity of life... My version of Ouroboros appears on all the cards' backs and also on card one, the GENIUS. This ever-fascinating symbol of perpetual change also (to my mind) bears a resemblance to the sign of infinity, a strong influence in this deck. Along with this concept of the unity of all things, close family, acquaintances and self are portrayed in metallic hues inspired by statues from antiquity, and somehow all come together with mythological characters, astrology, animals, chessboards, the Southern Cross and personal memorabilia to form the designs of the cards.” - Helen Meinicke

The publication of the beautiful Far Sight Tarot set is the culmination of a long creative project for local Brisbane artist, Helen Audrey Meinicke. Years ago, she designed and painted the cards in acrylics for her own personal use, "as a means of exploring the mysterious qualities of tarot through self-expression". Much more recently, she wrote the companion book, and now in 2007, they are available as part of a self-published cards and book set.

I first saw the images for the deck at an early meeting of the Time Out for Tarot group in Brisbane. Helen had brought her paintings with her, and showed us though the cards one by one. She was unsure at the time of showing us the images at all, but she needn’t have been – we were all in awe at the colouring and carefully crafted detail of her paintings.

Her cards are a unique interpretation of Tarot influenced by her own ‘small world’. They are filled with personal association and meaning: her own belongings and possessions (from a well-loved vase in the Two of Water to dog-walking shoes in the Oddball); her close friends, family and her self. The scenes are usually set outside, among natural landscapes of oceans, mountains and sky, and are unbelievably detailed, with individual hairs visible in the manes of lions and the hair of dogs, horses and people.

There are lots of animals of both the domestic kind (Helen’s own dog appears in the Oddball), and natural and mythological varieties. I also enjoyed the Australian touches in some cards – a rosella in the Air King, a koala in a eucalypt forest on the Nine of Fire, our hundred dollar notes in the Earth King. Astrological symbols also appear in the cards, subtly placed as jewellery – necklaces, pendants, earrings – and tattoos.

The suits are personalised to Earth, Water, Air and Fire, with court cards of Girl, Boy, Queen and King. Also personalised are the major arcana titles:


Along with the regular 78 cards, there are seven extra cards in this deck (well, eight if the blank card is counted). There’s not only an alternative Lovers card, but a choice between Temperances, Emperors, Oddballs, and some minors as well. Which card is used is up to personal taste – it could be the Emperor with the aggressive energy, shown with bared teeth and a raised sword, or the Emperor with the more protective feel. The two versions of the Oddball cards (The Fool) show the same Fool and dog, but one viewed from the front and one from the back. The two Temperance cards have been treated similarly. The Lovers cards are both painted in soft blue tones; one shows two entwined bodies from the shoulders down, while in the other the faces of the people are visible.

Both cards painted for the Ten of Water (Tranquility) are just beautiful – one shows a youngish, pretty blonde woman up to her shoulders in water, the sun setting behind her, lilies and green tree frogs all around her (even flying over her head). The other has another woman, this time as a ship’s figurehead, underwater in the purple deeps with turtles and jellyfish.

The cards are large enough - at 15cm x 9.2cm - to be able to appreciate the detail of the scene. They have a thickish stock and are pleasantly matte to handle (and also to stay in a stack on the table without sliding off). The backs have an image of a snake ourobouros in a figure of eight on a starry sky background, with a copyright message printed unobtrusively at the base.

The cards come with a spiral-bound 84-page book printed in full colour. It’s printed on good paper and has cardboard front and back – this is one companion book that won’t fall apart or get easily creased with use. It doesn’t bother with spreads or basic information on tarot, just an introduction to the deck’s concept, explanations of the changes made and influences on the cards, and the card meanings. These have a full-colour thumbnail image, and for the majors, the astrological ruler and it’s ‘mirror pair’. Both upright and reversed meanings are provided, sharing Helen’s take on tarot in a stream of consciousness style with the most pertinent and important keywords bolded to jump off the page.

My only real problem with the cards is the association of Swords with Fire and Wands with Air. I’m used the opposite attributions and founnd the switch just that bit confusing when reading with the cards (though it is the most natural to Helen’s own tarot system). If investing in the deck, I think it would best used as a sole deck for readings, and for long enough to become familiar with its own distinct personality.

The Far Sight Tarot may seem a little on the expensive side at $170 Australian dollars, but it’s not over the top for a self-published full deck of 78 cards (plus extras) and a companion book It’s a set of stunning, thoughtful tarot images, and I’m very glad that it has become available as an equally considered printed set.

The Far Sight Tarot is one I seldom have used to do readings. Not because I don’t love its artistry, interpretive work, adherence to nature symbolism, maturity and impressive quality, but rather because of the frustration I experience deciding which cards to choose. Helen generously provided options with four of the majors: She provided two Oddballs (the Fool), Machismos (the Emperor), Lovers, and Temperance and recommended you use only one of each in a reading. Making that choice stymies me every time. Up until now I’ve just given up and thrown them all in but that never feels right either. A tarot deck should have 78 cards! I don’t want to double the possibility of one of these four cards showing up more often than they should. So sadly I wrap the deck back up in its lovely accompanying bag and put it back in my cabinet until the next time I want to tackle it.

In the Oddball you must decide if you want the character and dog walking towards you or walking away; in the Lovers you must decide if you want to see the top part of their entwined bodies or just the lower half of their faceless bodies; in Temperance, do you want to see the front or back of the Minotaur? For the Machismo (Emperor), do you want to see a close up of the sword or a close up of the goat? As I ponder the perspective I want, I put them aside for greater contemplation later. They drive me crazy with pondering, rumination and struggle! That alone is an extraordinary accomplishment for an author to achieve in a tarotist of almost 40 years!

By nudging you to make a choice she is challenging you to decide what the card means to you and how you want to interpret it. Do you imagine the Fool approaching you or walking away from you? That’s a tough one. That alone has kept me in suspended animation for over an hour. Temperance is even more mind boggling as you consider the minotaur is in one card coming towards you and in the other facing away; additionally in the card where he’s facing you, he is pouring water from a jug that he’s muscling over his right shoulder while in the other Temperance card, he holds a jug upright that appears to be emitting a rainbow. In the second card, it would appear the minotaur has already poured the water out of the jug and is now returning to his cave. There is that before and after theme again. I have never considered whether I’m viewing a character in the card before or after the main event or coming towards you or walking away. It changes how you will read that card significantly.

If you’re hoping for some help in deciding which card to use, you won’t find it in her accompanying booklet. Although well written and innovative just like her deck, it fails to help you decide which emphasis you would like to utilize. There are aspects of the book however that are also evocative and unique. Her descriptions of the meaning of the cards are very well written; succinct yet fulfilling. She bolds a few key words to aid you in grasping the central meaning in a glance. I liked her book overall but I would definitely have appreciated a larger font. The print is so tiny I have to almost sit it on the end of my nose to read it. I wish authors would consider us aging tarotists in the design of their little accompanying books!

The cards are rather large (6” X 3.5”) and of a much heftier stock than most decks in the market. Helen has included a keyword at the bottom of the card which I favour. I know some people find descriptive words distracting and even annoying, but I like them. For example she refers to the Air King (King of Wands) as a “mentor” and the 3 Wands is a “flying start”. Not interpretations I would typically use to describe these cards, yet perfect in combination with the symbols she’s used. Once again she succeeds in her desire to be thought provoking and original. For an author who describes herself as not an “authority” on the Tarot, she has done a thorough job in her interpretative work. She draws inspiration for her symbolism from inspiration, personal relationships and belongings, statues from antiquity, nature, mythology and astrology. No stone is left unturned! The result is a body of work that is beautiful to behold and one to contemplate.

Helen decided to use what she describes as the classic fire element for swords, but in my classic training Swords have always been air. Regardless of these challenges, I’ve decided to use Helen’s deck more regularly and get over my hesitation about making a decision regarding these four majors. I’ll make my choice and stick with it and see where this deck takes me and my clients. The truth is that I love this deck for all its originality and haunting beauty.