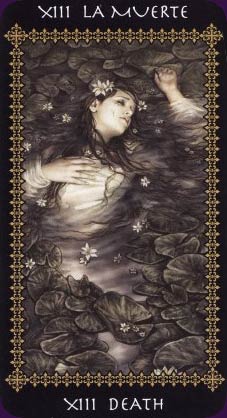 The Favole Tarot features gothic art by Spanish illustrator, Victoria Frances. The cards are dark and romantic but somewhat depressing - even the Sun card has a feeling of bleakness. While the deck has lushly illustrated majors, it follows the European tradition in the minors and has repetitive pip cards instead of tarot scenes.


Card Images from the Favole Tarot 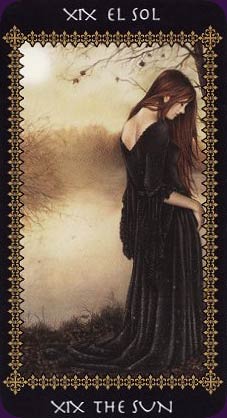 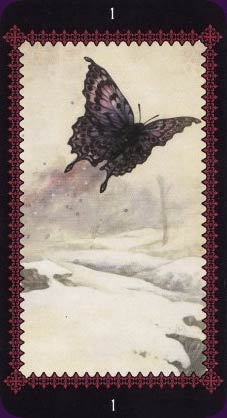 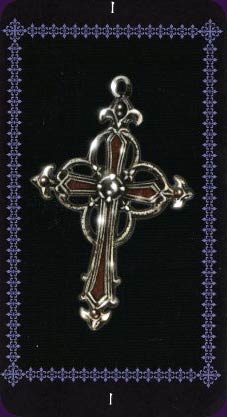 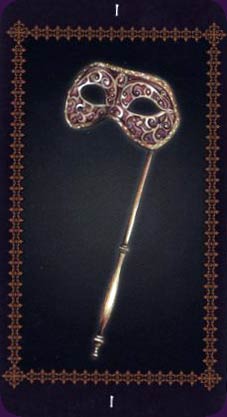 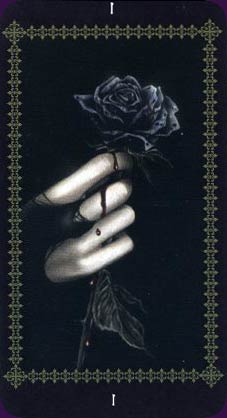 For an art deck, this is a lovely deck that celebrates death but not much life. Even the Sun, normally a festive card that brings to mind the warmth and vitality of the Sun, is a dark and dreary card showing a woman in a long flowing dress turned away from the Sun. And the Sun itself is shrouded by clouds and mist making this a hard card to find joy in.

The overall design of the deck is too small for my personal preference. Anyone who dislikes the size of decks such as the Llewellyn deck will probably like this one. It is built along the scale of a normal deck of playing cards. The back of the cards includes a device I do like – a subtle indicator of which end is the bottom. You have to pay attention to see the one lighter corner but once you’ve noted it, you will always know before you turn a card if it is going to be upright or reversed.

One of my favorite cards is Death in this deck. With a figure reminiscent of the drowned Ophelia, there is a beauty to this card that is hard to ignore. For me, this captures the spirit of the gothic love of death and the ability to see beauty in even grotesque images. I was not as fond of all the vampiric images of figures with fangs or blood dripping from their mouths.

The major arcana seem to have some imagination and uniqueness with the Hanged Man being likened to renunciation. However, The LWB with this deck is useless beyond words for the minor arcana. The suits in the Tarot Favole are Crosses, Masks, Roses, and Butterflies. No where in the LWB is there any indication of which suit corresponds to the more normal suits of Wands, Swords, Cups and Coins. Also, the pip cards are in the style of the Marseille Tarot decks with only the court cards showing any individuality. I do not like pip cards that simply show me four Crosses or 2 Butterflies, etc. This deck lost a lot of points for me in this area.

Overall, the Tarot Favole will appeal to those gothic art aficionados who want a deck by an up-and-coming artist. Victoria Frances has a lyrical quality about her work that did remind me of Royo but also of Jonathan Bower. This deck speaks powerfully about the beauty that can be seen in the tragedies of life. While I myself would not read with it, I can see this deck in the hands of some of my more cutting edge friends. I predict that it will one day be a deck art collectors drool over and covet. I don’t see it becoming a very popular reading deck.

Not particularly interested in vampires but these cards are absolutely stunning; the artwork is gorgeous, dark and mysterious – definitely images that draw you in. When you open the pack by yourself you wish there was someone with you so you could say, ‘Look at this! And this.’ So you talk to yourself, and there is nothing wrong with that. I was overwhelmed with the little pack; they fit in your hand neatly, and even though you would love to see them bigger it is enough – some might say that they are an adequate sufficiency.

There is nothing in the details to tell you what suit is what; I guess that the crosses are swords and masks are wands but it’s up in the air as to whether the cups are black roses or butterflies. I feel that the emotion lies with the butterflies, the celebration and tragedy of their short lives – so they should represent the cups. The thorny danger of roses indicates the problems we all have with money – but, it is possible to see the other side of this argument. Don’t we all cry and bleed tears when pricked by the dark side of love? And the other terrible truth is that butterflies feed on excrement, and they are here today, gone tomorrow – a life as short as cash-flow.

I write this as I browse my beautiful new acquisition, before I go exploring to unearth the truth of the matter because it is relevant to show possible inherent problems with such a purchase. A new tarot reader would not know how to solve this and might give up, give the fabulous things away and lose out on the experience of using this inspiring pack.

The disappointing aspect is the lazy decision to make the number cards of the minor tarot plain icons – yes, said icons are pretty but still uninspiring cards with 1 – 10 crosses, masks, roses or butterflies in attendance.

I have fallen for the royals too; the difference between the pictoral and the merely countable is so astonishing I’ve decided to break the pack and use the people alongside the major tarot. The numbers can be utilised as positive and negative in the answering of questions. I always wanted to separate a pack but have never been able to do it until now – this is the right deck to split.

Only time will tell if the cards work for me but I don’t think I’ll have a problem with these; I bounce off images and have a sense of the ironic/sardonic when looking at life in general so the darkness of the images won’t hold me back or depress my natural enthusiasm for living in the world. So, I must go to be with my lovelies and make notes for the next perspective which will appear as I get to know them.

This deck was originally given to me by a coworker of mine. I am not particularly one who strives to find gothic art or concepts, so I had ignored this deck for awhile.

Once I finally picked up the deck and used it for a few readings for myself, I was quite astonished at how the cards worked and flowed together! Each card I drew seemed to give deeper meaning to the last.

As with the other reviews, I do agree that the lack of imagery and story in the 1-10 cards to be discouraging, but this allows the third eye to open and let intuition play its course while using this deck. I also did find it hard to identify which of the suites in this deck coordinate with the suits of other decks, thankfully my friend had already written down what she believed to be the suites: Swords - Butterflies, Wands - Crosses, Cups - Flowers, Pentacles - Masks. Because of these reasons, this is *not* a deck for someone who is new to the Tarot, best for more experienced readers.

I have also found this deck to be a MUCH more reflective deck than others I have seen and used. More for internal matters, and dealing with the 'self', rather than what is happening outside and with other people.