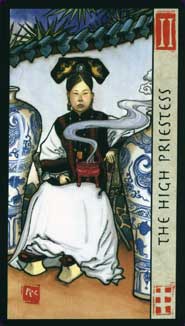 A colourful and finely illustrated synthesis Tarot and Feng Shui, the Chinese system of environment arrangement. The biggest change in the Feng Shui Tarot from a 'standard' tarot are the suits, which are now Black Tortoise, Red Phoenix, White Tiger and Green Dragon instead of Wands, Cups, Swords and Pentacles, and it can be difficult to get to used to. 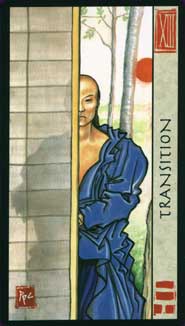 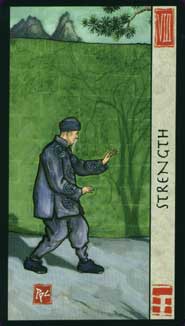 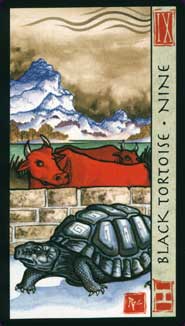 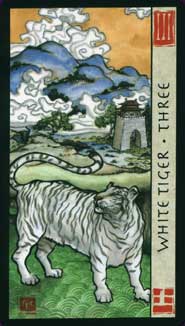 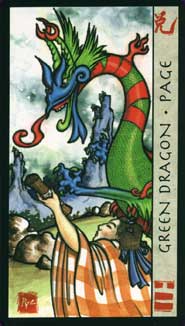 At first I would like to introduce the review reader to the meaning of feng shui as explained by Adeline Yen Mah in her book “Watching the tree”:

Feng means “wind”; shui means “water”: feng shui, or “wind and water”, is a traditional Chinese concept linking the destiny of man to his environment; it aims to ensure that people live in harmony with their surrounding. Metaphorically, feng shui should be translated as “geomantic omen”, meaning that a person's surroundings will influence his fate. The closes equivalent to feng shui in the western world is astrology.

The LWB has 47 pages and lacks any deeper introduction to feng shui. There is a brief introduction which states: Feng Shui, like Tarot, is also designed to make you aware of harmony, discord, blockages, balances or imbalances in your life... Tarot offers a similar service, only at a more esoteric level. It also states that the Feng Shui deck is composed like a traditional Tarot deck and should be used as such. It is not meant to give the reader a feng shui reading, but a Tarot reading with the meanings of the cards illuminated by visual examples of feng shui.

Simple core and reverse core explanations are given for each card in the LWB, however these are the traditional tarot meanings and have no explanations from the feng shui perspective, thus the reader is left wondering why the cards are designed the way they are.

For the reasons above I suggest you buy the Feng Shui Tarot accompanying book, which provides a greater deal of information on this deck and any owner of this deck will find it utmost useful.

The accompanying book has 232 pages. The chapters are as follows:

The book reads well, and is quite informative on the history of tarot, how to work with it and how it relates to feng shui in this deck. I find the explanation sufficient.

The minors and court cards are the same, with a section called the “proximity” instead of the “thought trend”. Proximity informs you what it means when various cards are found next to each other in a spread or what it means when multiple cards of a certain suit or number are together in one spread.

The majors somewhat follow the Rider Waite, even though, for example, the Fool in this deck is not seen as about to set off on a path of life, but as a woman who appears rather still and calm. Therefore at first sight without consulting the accompanying book this card's message is confusing. Other than this I think the majors have a smart design and reflect the philosophy of both tarot and feng shui well. Justice is a lone woman figure holding a paper umbrella with two containers balancing on her shoulders (these are instead of the traditional two Waite swords). The book explains that symbol and character of one container is yin and the other is yang, thus Justice urges you to maintain the inner balance between your ego and your higher self as you receive what you give. My favourite is the Strength card showing a figure practicing the art of tai chi in front of a stone wall with a shadow of a tree. According to the authors this man is focusing and manipulating his Chi energy, maintaining the inner strength.

I also like the Temperance card, a beautiful serene woman with a flowing green robe holding two Chinese cups of tea. The Moon card is a far cry from Waite, but it is a beautiful display of magical realism. It shows a gate through which you can see a figure on a boat on a placid lake. It is like looking through a gate of your own unconsciousness and hidden aspects of your mind. The Tower shows no people falling out of it, but the “rapid change” of this card is depicted by a tornado's activity of the storm which has damaged one of the towers. Quite a nice approach, as feng shui is about the nature's elements among other things.

When I have first bought this deck the Star card immediately caught my eye. There is a beautiful waterfall pouring out of a stary night and wind chimes hanging to the left of “the star figure”. Metal Wind Chimes are used in Feng Shui to attract Good Fortune in our Homes and Offices. They also clear any bad luck brought by the feng shui of times or by the “feng shui flying star”, thus allow for the new beginnings and a change of luck. Unfortunately the star figure herself looks a bit sad and meditative rather than optimistic and twinkly.

The Minor arcana suits are represented by the Four Celestial Animals. Unfortunately neither the LWB nor the accompanying book mention this, even though the accompanying book explains about “the four cardinal points of the compass, north, south, east and west each have a corresponding animal associated with them” and further explains the choice of the suits as below:

White Tiger – Suits of Swords (West) – a powerful creature evoking a sense of strength, defense, and a need for control.

Black Tortoise – Suit of Wands (North) – has the enduring qualities of stability, longevity and security.

As the accompanying book explains, Red Phoenixes (cups) relate to loved ones, and concerns of love. White Tigers (swords) indicate emotional concerns, pressure and effort. Black Tortoises (wands) indicate changing vibrations, activities and movements. Green Dragons (pentacles) indicate monetary transactions, loans, banking, and other financial situations. An additional list of the general key words for each suit can be found in the accompanying book. The animals are carefully chosen to represents the suits nature accordingly.

These animals are shown on all minor arcana cards, there are people only on the court cards.

My favourite is Red Phoenix Two. Surprisingly there are no two red phoenixes “holding feathers” or touching beaks. There is a lone bird looking into the distance, sitting next to a bonsai tree. But consult the book before jumping to conclusions: the bonsai tree plays an unexpected role from the feng shui point of view: the bonsai tree symbolizes the fruition of a union grown from either the seeds of friendship or the seed of love.

As Adeline Yen Mah writes in her book “Watching the tree”: To the Chinese mind, the landscape is alive. Ridges on hills are seen as tigers' manes or dragons' backs and feng shui masters search for them in every natural vista.

An ideal site would be bounded by the Green Dragon of the East, the White Tiger of the West, the Red Bird of the South and the Black Tortoise of the North. In the countryside these animals are “discovered” in the contours of surrounding slopes, peaks and valleys; in the city, they are detected in the shapes and forms of neighboring buildings.

In modern terms, one's dream house (or tomb) should face south; on its east side there should be undulating inclines or a hill, representing the dragon; its west side should border a long, meandering path, symbolizing the tiger; in front there should be the ocean or a lake, depicting the bird; behind and to the north is a mountain, which represents the tortoise.

The Court card titles are standard: Kings, Queens, Knights and Pages. But the cards themselves look quite non-standard, the Queens and Kings do not necessarily sit on thrones for example. In the courts the people interact with the celestial animals, the site and the elements. They are very feng shui oriented. My only objection would be that all of the court cards have the same expression, i.e. look a bit expressionless. Let's look at Knight of Wands for example (Black Tortoise Knight). Normally you see a man on a horse boldly and happily looking for an adventure. However in this case both the horse and the knight look quite indifferent, if not tired. You have to read the book to understand how the site, the tortoise and the knight interact to create adventurous thoughts.

The design of the the cards is rather slim, long and shiny. The entire pack is a bit heavy when shuffling; kids could have a problem shuffling with their small hands. Each card has a black border with a strip of beige on the right. This strip contains the card name in English and its number in the Chinese name red stamp style, with a trigram on the bottom. Trigrams and their connection to feng shui and I-Ching are well explained in the book. The card backs are reversible with a Chinese symbol of longevity on a beige background. They come in a box which shows signs of usage after a while.

All in all I think that tarot and feng shui meet successfully in this deck. I think a lot of thought went into the design and that the cards respect both the tarot tradition and the feng shui concept. The deck has a meditative, positive and calm feel to it.

I would recommend this deck to anyone who likes standalone systems with a theme and philosophy to learn from the accompanying book. This deck reminds me of the Osho Zen Tarot, in a way that you do not learn traditional tarot as such, nevertheless you are none the short as you gain something else which the deck has to offer. I also think the art is very pretty, anyone with an eye for the beauty of the Asian art will highly appreciate this deck.

I believe that you need the accompanying book to fully understand the concept and for the deck design to make sense to you unless you are a very experienced tarot reader AND an experienced feng shui practitioner in which case the cards and their symbols would be probably very clear to you.