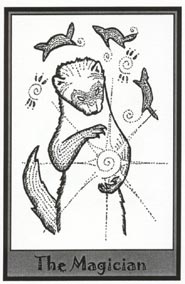 The Ferret Tarot is an amusing, unique and readable Tarot focusing on the perspective and life of the ferret. The symbolism of the 78 cards is loosely based on the Rider-Waite. Printed in black and white on non-laminated card.


Card Images from the Ferret Tarot 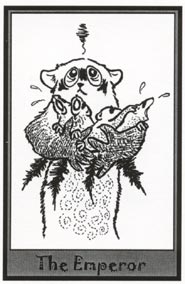 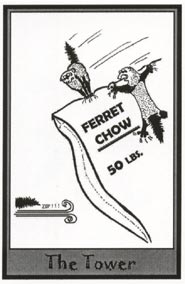 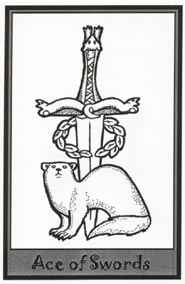 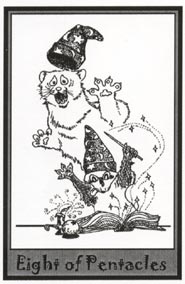 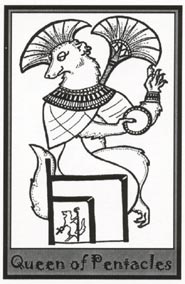 The Ferret Tarot is a self-published and limited edition deck of 500 copies, uniquely focusing on the perspective of the ferret. Originally begun by artist Elaine Moertl as a fun project, the pen-and-ink cards multiplied into a full 78 card Tarot deck.

The Ferret cards are black and white, drawn in simple, spare fashion with minimal background detail. The focus is of course on the ferret, but the perspective varies between that of real ferrets (Nine of Wands, Seven of Swords, Eight of Swords); anthropomorphised, humanised ferrets (Strength, Ten of Pentacles); traditionally tarot-posed ferrets (Star, Hermit); and just plain humorous ferrets (Emperor, Temperance, Eight of Pentacles).

My personal favourite cards are the Tower, with its two ferrets cling onto a falling bag of kibble, while one zips away; and the Emperor, a harrassed looking male ferret holding an armful of young ones. Though a few liberties have been taken with the symbolism the foundation of the deck is based on the Rider-Waite, so it can still be used for readings as well as amusement. (As I've never seen a ferret in real life before – they are illegal where I live - this deck was also an educational experience for me.)

The 78 cards (plus two extras: the numbered and signed title card and a card with sample spreads such as the Weasel Dance, Ferret Stomp and Three Card Dook) have a reversible design on the backs and are packaged in a lined Tarot pouch. The cards are printed on unsealed white card stock. As they don’t have the fancy rounded edges and lamination of expensively produced decks, some extra care will need to be taken with these cards (particularly on damp surfaces). However, there is an advantage, as suggested by the artist: colour in the cards yourself with pencil (felt pens or even paint could be used, too), and spray a fixative to set the colours.

The 78 cards come with a small card-sized booklet with an introduction and short meanings for the cards (upright only). They all have an often humorous phrase, then several keywords. For example:

Hanged Man – Oops! Well this IS a new perspective. Sacrifice, suspension, transition, removal from the situation.

The Ferret Tarot is a cute novelty Tarot for the ferret lover and deck collector, and yet can still be used for clear readings -– if you can stop smiling long enough.

I have to say, this tarot deck is a little gem! The author has released a second edition, so the cards are still available for purchase. They are printed on basic business card stock (3 3/4 x 2 1/2” or 9.5 x 6.5 cms), with square edges and no lamination. There is a white edge around the outside, a black border, a grey border that widens at the bottom for the card title, and an inner black border around the image. I love my deck so much I paid to get the cards sealed in plastic, as I didn’t want them getting wet or damaged. I stuck with the black ink drawings, as I knew my artistic colouring abilities could never do the cards justice. The deck is also delivered with a very LWB, and a lined bag with two cords sewn into one seam, so they can wrap around and be tied off.

The spreads offered on one of the two extra cards have cute names: the Weasel Dance, Ferret Stomp and Three Card Dook. However, they’re pretty standard fare: five cards, one card, and past, present, future respectively. The other extra card is signed, and has The Ferret Tarot theme picture of a ferret laying out cards by candlelight (also on the LWB).

As for the cards: the suits follow the RWS tradition, as do the court cards, with Pages, Knights, Queens and Kings. Trumps also follow the RWS names, but avoid the 8/11 dilemna by being unnumbered (though in the LWB Strength comes in position 8). The card depictions largely follow the spirit of RWS, but with many subtle and delightful changes to fit in with the medium and theme. The designs are ink drawings, so they don’t have the depth or detail of many decks, nor any colour. And yet the images are highly evocative, as well as often being wonderfully funny.

For instance, Justice shows one ferret with a blindfold that’s been lifted so she can peer from beneath it, while she holds a sword and scales. The scales are being tipped from beneath by another cheeky-looking ferret. The LWB says: “Watch your Karma. Fairness, balance, impartiality, equilibrium between understanding and action.”

The Knight of Swords has a ferret in a flying contraption worthy of Leonardo da Vinci, looking like he’s having the time of his life, while another ferret gazes up in bemusement. “Where no man has gone before. Courage, hot temper, skill, heroic, riding into the storm.”

The Five of Swords depicts a ferret clasping five swords, looking over his shoulder to stick his tongue out: “All mine fair and square! I ain’t sharing! Humiliation, degradation, conquest, loss.”

Some of the cards are seriously cute, such as The Lovers tangoing, or the Two of Cups, where two ferrets gaze into one another’s eyes, while their tails curve up and touch, forming a heart. Others seem at first glance to be a little far from the RWS meanings, but may not be: the Seven of Pentacles shows seven ferrets passing socks up to the top of a sofa. “You do the work, you reap the benefits. Recovery, new business, hard work with good promise.”

This brings up one of the themes of the deck – socks. I’m guessing (being a non-ferret person) that it’s an in-joke like dogs and shoes. Socks also appear on the Seven of Swords (a ferret escaping with a sock from the laundry basket), the Ten of Pentacles (two ferrets dressed to the nines, on the red carpet, with paparazzi around, coming out of “Sock Wars - Premier Opening”) and the King of Pentacles (a ferret with eyes closed in delight, pressing three socks to his chest – “My life is grand, I have all I need. Economic power, successful leader.” – though for me it echoes more with “Mine, all mine!”)

While the LWB is very small, and generally quite amusing, it has some real depth. For example, the Six of Swords, a ferret poling a boat: “All serious rites of passage are done alone. Inner journey, a voyage, quiet passage in a difficult time.”

I’ve used this deck in all kinds of spreads, and it works very well. The readings are clear, and light-hearted, without being simplistic or pollyannaish. I probably wouldn’t use this pack in a face to face reading, not least because the plastification makes it somewhat challenging to shuffle (and unplastified I wouldn’t trust the deck to a stranger’s hands). Also, people might feel I wasn’t taking their questions seriously if I pulled this deck out. Still, it’s a great deck for reading for yourself, for friends, or possibly at parties.