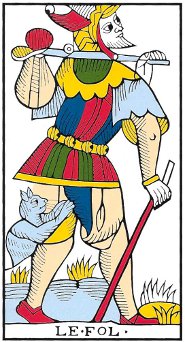 The Tarot de Marseille Jean Dodal is a restoration of the Marseille deck published in Lyon in 1701, one of the most complete early Marseille-style decks. This is the full 78-card deck, with each card created in precise detail by Jean-Claude Flornoy. 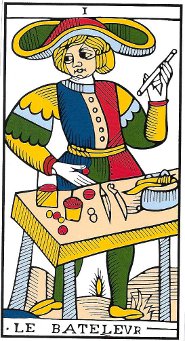 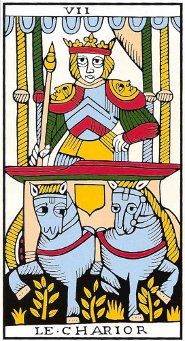 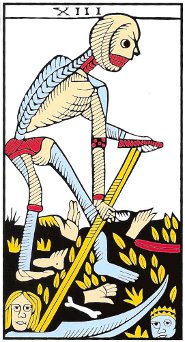 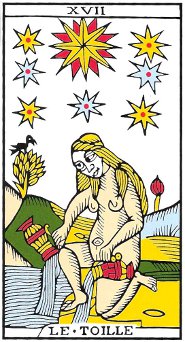 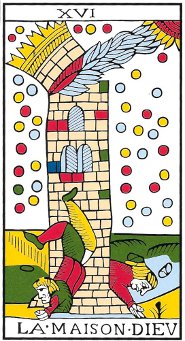 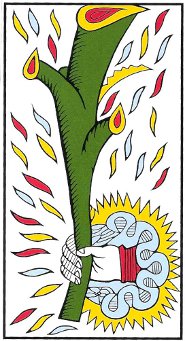 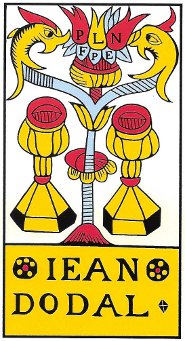 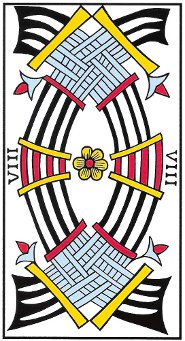 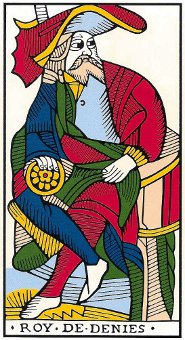 I was first introduced to the Tarot in 1982, when I was, of all things, a Mormon missionary in Béziers, France. A recent French convert to Mormonism showed me some tarot cards and explained their ancient symbolism to me. I was intrigued. The cards were – I learned later – from the Paul Marteau rendition of the Tarot of Marseille, published by Grimaud. Ten years later, I found a copy of that same Grimaud Tarot of Marseille in a New Age book store in Minneapolis and bought it, the first Tarot deck I'd ever owned. Over the years since then, I've nurtured a fascination with Tarot by collecting dozens of other decks, historical, esoteric and fanciful, many of great beauty. But never have I found a deck I really enjoyed studying or using more than that “classic” Tarot of Marseille by Grimaud – until now.

The Jean-Claude Flornoy restoration of the Jean Dodal Tarot of Marseille published in 2009 should be of great interest to Tarot enthusiasts, if only because of the Dodal deck's historic importance. There are a handful of complete or nearly complete decks available to scholars of the Tarot that were produced prior to the mid-eighteenth century: the Visconti decks of the fifteenth century, the so-called “Paris Tarot,” the Jacques Viéville deck and the Jean Noblet deck of the seventeenth century, and the Dodal deck of the early eighteenth. While there are suggestive fragments of older decks that appear to reflect the classic Tarot of Marseille imagery, the Noblet and Dodal decks are the most complete early decks following that pattern.

The Tarot of Marseille pattern is less familiar in the English-speaking world, because Tarot was introduced to England and America by the London-based Order of the Golden Dawn. The Anglo-esotericists saw the Tarot of Marseille as crude and unsophisticated. Following the lead of continental esotericists like Antoine Court de Gebelin, Eliphas Lévi, and Oswald Wirth, they assumed it to be a corrupted version of images presumed to date back to classical antiquity. They thought to restore the “ancient,” “pure” Tarot by creating revised imagery that incorporated Hermetic, Kabbalistic, and ancient Egyptian symbols and themes. They had, of course, no historical evidence to back their assumptions. The result was an approach to Tarot in the English-speaking world that encouraged never-ending, creative re-imagining of the Tarot, with endless multiplication of fanciful designs to suit every individual taste.

On the continent, however, there has always been a profounder respect for the original imagery of the oldest existing Tarot decks. In France, the Tarot of Marseille has come to assume canonical status. Far from assuming the Tarot of Marseille to be unsophisticated or corrupt, the French have, instead, seen every nuance of line and color in the old Tarots of Marseille as rich in meaning, speaking directly to the subconscious in the language of dream, myth and symbol. For the French, Tarot is less esoteric than psychological. The French pay close attention to details such as the size of a figure's hands, which direction its eyes are looking, or the patterns in the folds of its clothing. And then there is color! So in France, the hallmark of a good deck is its fidelity to the Marseille canon, however that is defined.

Jean-Claude Flornoy's contribution to the world of Tarot studies has been to recreate in as precise detail as possible the two oldest existing Marseille Tarot decks – the Jean Noblet deck (c. 1650) and the Jean Dodal deck (c. 1701). Flornoy's ideal was to produce for modern Tarot-users decks that would look as much as possible like what these decks would have looked like, brand new, three to four centuries ago, perhaps with slightly higher production values than were used then. (Color stencils, for instance, were often applied more carelessly in the seventeenth century, resulting in colors bleeding outside of the lines.)

Flornoy took the very disciplined approach of not allowing himself to make any alteration to these decks whatsoever, apart from removing the effects and damage of natural aging. This has resulted in some rather interesting and troublesome quirks. Lines are frequently broken or apparently missing. For example in “LE FOL” (“The Fool”), there's no line to define the Fool's left buttock, only a swatch of tan color, and the cat pawing at his behind seems to be missing its back end. The 9 of wands (or “Bâtons”) appears to have one too many caps or heads on the wands, while the 8 of swords (or “Épées”) has one too few. In “LE SOLEIL” (“The Sun”) the space in between the legs of the two children doesn't match the background drawn to the right and left of each figure, and the stretch of wall to the right of the right-most figure is a different color from the wall to the left of it.

There are far too many of these kinds of visual quirks and inconsistencies in the deck to name. Almost every card has at least a few, and some cards seem full of them. The French actually take a seemingly perverse delight in incorporating these quirks into their interpretations of the cards. In the booklet that accompanies the Dodal deck, Jean-Claude Flornoy himself, for example, insists that the figure to the right in “LE SOLEIL” was intentionally drawn one-eyed, in order to symbolize the relationship of student to master. In “LA MAISON DIEV” (“The Tower,” literally “The God House”), there's a gap in the line defining the cranium of the tumbling figure to the left. Flornoy suggests that this was intentional, a symbol of the “opening” of the mind to cosmic energies – not unlike the broken crown of the Tower itself.

The French also make much of oddities in the titles of the cards. Arcanum number II, usually “LA PAPESSE” (“The Popess,” or “The High Priestess”), is labeled “LA PANCES” in the Dodal deck. What does this mean? Apparently no one knows for sure. Perhaps it is a play on words, suggestive of the French word for “thoughts” (“pensées”?). It is anybody's guess. “L'AMOUREUX” (“The Lover”) is spelled “LA MOVREV,” perhaps introducing the specter of death into a card about love? “L'ETOILE” (“The Star”) is spelled “LE TOILLE,” “the Veil.” Is this card about the drawing back of the veil of the Heavens?

It would have been tempting to any restorer of the cards to “fix” all these seeming quirks and inconsistencies. Many might ask why spellings in the titles weren't corrected or updated, why broken or missing lines weren't completed or added, why colors weren't redone to bring the images more into conformity with what the average reader expects of them. Jean-Claude Flornoy instead reproduced every last one of these quirks with an almost religious fervor. To him, these were not careless errors, but clues deliberately left by skilled craftsmen, keys to unraveling the mysterious meanings of the images left for those willing to apply the necessary diligence to the study of the images themselves.

The result is that the cards have a dream-like quality. They seem to appeal directly to our unconscious depths by offending our conscious sensibilities.

It took me a while to get used to the particular style of the Dodal designs – habituated as I had been from reading the Grimaud Tarot of Marseille to the 1760 Nicolas Conver designs on which the Grimaud deck was based. The color pallet is restrained, consisting of only eight colors (dark and light blue, yellow, green, red, tan, black and white) simplifying color-based analysis of the cards' meanings. The Dodal designs are striking and provocative. Facial expressions and postures of the figures are nuanced, sometimes humorous, sometimes penetrating, sometimes mysterious. The deck – in a word – holds its own as a work of art, inviting study and reverie. Once I finally had the deck in my hands for the first time, I could barely put it down. It has all the qualities that made me fall in love with the Tarot in the first place, and more.

The Dodal deck rewards study. I remember, for example, experiencing delight as I noted the connection between Arcanum XIII (“Death”), “LE CHARIOR” (“The Chariot”), and the four knights: all have black earth from which sprout yellow flora. Leaves sprout from within the folds of the dress of the woman in “FORCE” (“Strength”). You can literally see the strings up the sleeve of the Magician's right hand in “LE BATELEVR”.

There are a number of Marseille-style Tarot decks in print and available to students and readers of the Tarot today. Many of them, such as the 1999 version of the Marseille Tarot published by Spanish tarot publisher Naipes Heraclio Fournier, or the “Universal Tarot of Marseille” published by Italian Tarot publisher Lo Scarabeo in 2006 based on the Claude Burdel designs, do what Jean-Claude Flornoy could not bring himself to do: they correct and revise the images and titles, creating a kind of purified Tarot of Marseille that has never actually existed historically. The result are images that are beautiful in their own right but a little too sterile for my tastes.

The Camoin-Jodorowsky Marseille Tarot deck (published in 1997) is interesting because, even though the images are heavily edited and “corrected” by its authors, they deliberately incorporate many of the design quirks found in actual seventeenth- and eighteenth-century Marseille Tarot decks. I actually like the Camoin-Jodorowsky deck a lot, and I use it regularly for meditation and reading. But for historical purists like myself, the Flornoy renditions are irresistible – because of their absolute fidelity to decks that are much, much closer to the origins of the tradition.

I hesitate to mention the Tarot of Marseille deck produced by Carta Mundi of Belgium in 1996, and distributed by U.S. Games Systems, Inc., but the fact that it claimed to be based on the 1701 Jean Dodal deck begs comparison. The Carta Mundi version is inferior to the Flornoy version in every respect. The drawings look clumsy by comparison. The snout of the cat in “LE FOL” is inexplicably (and awkwardly) lengthened, presumably to turn it into a dog. The eyes in many of the figures look puffy and distracted. The color scheme matches the (widely criticized) color scheme used in the Grimaud deck, rather than the original color scheme in the Dodal deck. I mention it only because my experience with the Carta Mundi deck turned me off of the Dodal designs. The Flornoy version brings them to life, and gives them the exalted place they deserve in the Tarot of Marseille canon.

I'm also a fan of the Noblet deck published by Flornoy. That little deck has its own charms and quirks – including its diminutive size. The Flornoy Dodal cards are actually larger than the typical Tarot cards – 73 mm by 132 mm – something I really enjoy. I like holding and shuffling a deck that feels substantial. Among other features that I appreciate in the Dodal deck for reasons of historical interest is that it is a good example of a “Type I” Tarot of Marseille pattern, with the cupid figure in “LA MOVREV” facing to the left, with the hanged man's arms bound tightly behind his back in “LE PANDV,” with flames rising up to Heaven (rather than descending from it) in “LA MAISON DIEV,” and a full-faced moon in “LA LVNE.”


For card collectors, this deck is a must have, if only for its historical interest. If you like using the Tarot of Marseille for readings, this deck may become your deck of choice, as it has for me. I ended up buying multiple copies of it, as it has become my favorite deck for study, mediation, and reading.