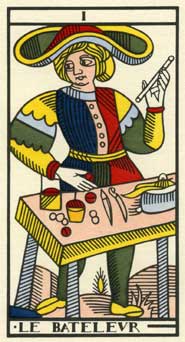 The Jean Dodal Tarot is a Marseilles-style Tarot, a modern restoration of the 22 Dodal trumps from 1712. Jean-Claude Flornoy, a French Tarot historian, restored the deck. 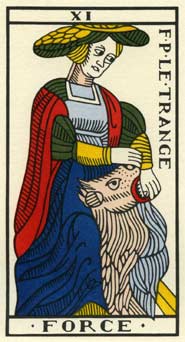 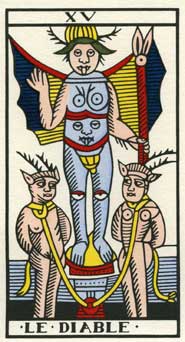 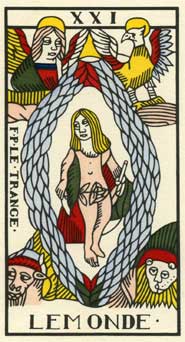 "Le Tarots Marseille de Jean Dodal" is a hand colored, Majors only, version of the "Jean Dodal Tarot", re-edited by French Tarot historian and Cartier-enlumineur Jean-Claude Flornoy. The deck comes with a LWB (Little White Book) in French, along with an English translation in an accompanying pamphlet. For those who may be concerned about the rigors of overseas shipping playing havoc on their deck, they need not fear ... the deck and pamphlet are very well packaged ... no harm is going to come to anything.

One of the things that I like about Flornoy's work is that it is thorough, and well presented. In the LWB for this deck, Flornoy begins with a discussion of the Legend of the Tarot of Marseille. This is most helpful for those like myself who have never really worked with a Marseille deck before. He speaks of its imagery as being western in origin, and goes into some depth about influences on the deck. He speaks of churches and cathedrals, and how they were also transmitting an entire system of sacred knowledge, through stone, wood, and glass.

Flornoy also speaks of Tarot beginning as a game, played for money. He describes Tarot as a "bottle thrown into the sea; knowledge sent on, blindly, to future generations." He has included the phrase sung by the Compagnons du Devoir , describing the traditional colors used in the Tarot. From the LWB:

"White, the tears of Maitre Jacques Black, the earth which bore him Red, the blood he shed Blue, the blows he suffered Yellow, perseverance Green, hope"

In discussing Jean Dodal, Flornoy makes an interesting surmise: because the "Jean Dodal Tarot" and "Jean Payen Tarot" resemble each other to such an extent that they could be mistaken for each other, he feels that the same engraver is responsible for both decks. He goes on to say that the engraver has a high level of graphic talent and a sure touch, but he is uncomplicated ... i.e. not intellectual or sophisticated.

The cards themselves come in a sturdy, cream colored box. On the front of the box is the graphic of the Sun, and on the back of the box is an explanation of the deck. The cards themselves are 2 3/4" by 5", with a small black and white pattern on the back such that it would not be possible to tell if the cards were drawn in the upright or reversed position. The are sturdy, good quality card stock, with squared corners.

The front of the cards has a cream colored background, with black lines surrounding the image. (Note: The small black lines within the image are representative of the original deck.) The card number, in Roman numerals, is placed at the top of the card, with the card title running across the bottom of the card. There are two extra "maker" cards in the deck: the Two of Cups, representing Iean (Jean) Dodal, and the Two of Pentacles, representing Jean-Claude Flornoy. Within the 22 cards, FORCE and LEMONDE carry the notation "F.P.LE.TRANGE", which means "Fait Pour L'Etranger", or "Made for Export". According to Roxanne Flornoy, this has to do with the French Royal tax system at the time.

The titles for the cards are in French, as follows:

The re-editing of this deck is stunning. I highly recommend that you go to Flornoy's site and see the comparison scans between the original deck and the re-edited cards. There is also a section on his site (The Atelier) where he describes the process of hand coloring this deck, which I found interesting. Another not to be missed section on is "Journey of the Soul", Flornoy's personal take on the journey through the Major's.