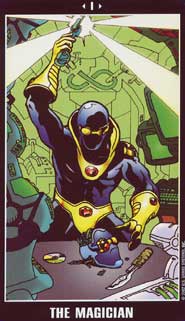 The Fradella Adventure Tarot is a comic-style deck of superheroes and villains, featuring characters from the fictional 'Cyber Age Adventures' universe by Frank Fradella. 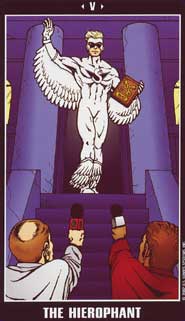 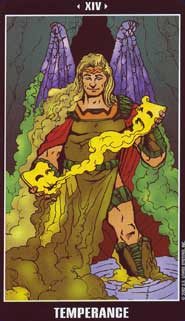 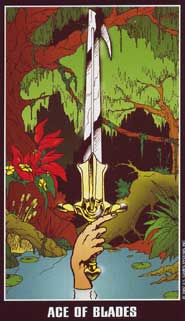 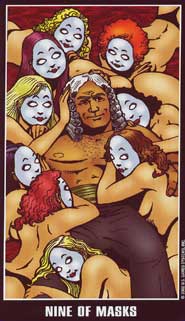 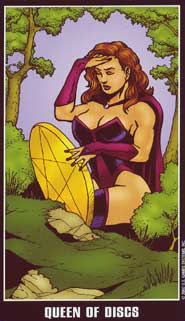 Superheroes, villains, patriots and cyberspace… an unusual combination for a tarot deck, but one that works. Although this is not a deck I would normally be drawn to because it did not seem feminine on the surface, the artwork caught my eye, and I decided it would be an interesting deck to review. I also thought it would be a deck my young son would enjoy. I was correct on both accounts.

The Fradella Adventure Tarot is a product of the iHero Universe Comics created by Frank Fradella, Founder and President of iHero Entertainment™. Fradella teamed with Katrina Hutchins, and Canadian artist, JP Dupras, to create the deck. Unfortunately I found little information on the Ms. Hutchins. Mr. Dupras appears to be an established, young artist in the comic industry.

The Fradella Adventure Tarot is a 78 card deck based on the RWS, with symbolism revolving around the characters in the iHero Universe. Fradella’s idea of the classic struggle between good and evil in the superhero saga would work well with the tarot is a good one. Not only is the fool’s journey played out through the majors very ingeniously, the minors are equally as engaging. Wands are represented by staves; Cups by masks; Swords by blades; and Pentacles as compact disks. The Court cards follow the traditional RWS designation of Kings, Queens, Knights, and Pages.

The reader does not have to be familiar with the iHero comic story line to use the deck. The imagery is inline with the classic RWS meanings and is not a complicated deck to read or understand. It has minimal nudity, and a strong sense of American patriotism. The fascinating aspect of this deck is that it addresses the notion that being a superhero does not shield someone form the day to day problems of life, and that a superhero’s life is not just about saving the world. There is humor, sadness, poverty, sexuality, friendship, work, play, and spirituality, but these emotions are viewed through the eyes of a superhero, which makes it very intriguing.

The deck is standard size, 4 3/4” x 2 3/4, but I found it to be a bit stiff and hard to shuffle. The reversible backs of the cards are purple with stars and two red F’s hooked together resembling a symbol you would likely see on the chest of a superhero. The Little White Book (LWB) is very basic, but the companion book is very detailed and easy to use. The book contains a nice addition of two of the comic book stories. Fradella appears to have selected the Celtic Cross as the spread of choice for this deck and a poster of the spread is included in the kit.

Instead of my normal routine of offering readings with this deck to assess it for readability, I decided it would be more advantageous to see how my 8 year old son would react to the deck. He was immediately interested and connected instantly. He read for me and had no problems intuitively interpreting the meanings of the cards. He was having so much fun with the deck; he created an impromptu spread and was very engaged in asking me questions. After the reading, he divided the ‘good guys’ apart from the ‘bad guys’, which proved to be a very interesting exercise about perception. He saw some characters as bad, while I saw them as good and vice versa. He also came up with a fun little game where one of us selected a card and the other would mimic the pose of the character. It was time well spent.

I highly recommend this deck to anyone as a good starter deck for young and older folks alike. While it appears to be more of a novelty deck on the surface, it is obvious that a lot work went into ensuring the deck is multifaceted enough to evoke thought and emotion and deliver a powerful reading. This is a deck I would bring out when reading for someone who would benefit from experiencing the Tarot through a mainstream genre such as comics and superheroes.