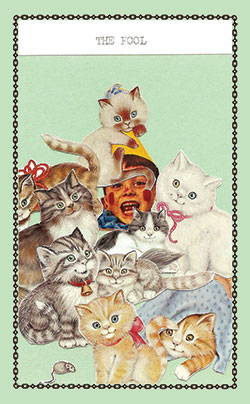 The Frau Grand Duchess Tarot has 78 full-colour collaged cards, originally put together on green index cards. The collages have a very sixties retro vibe, even down to the typewriter font used for the titles. Self-published and available direct from the artist. 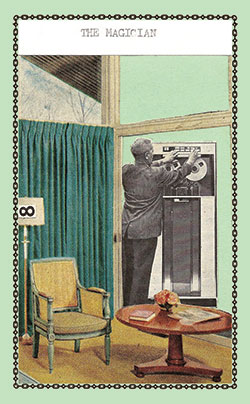 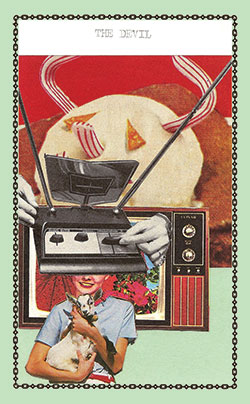 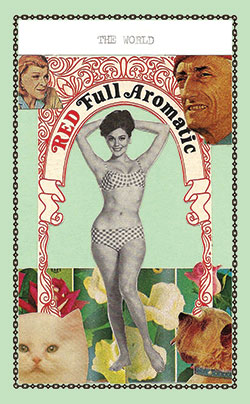 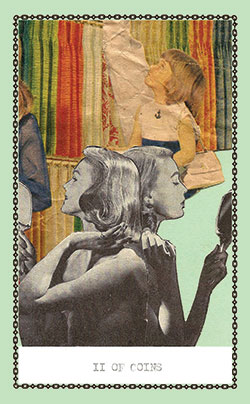 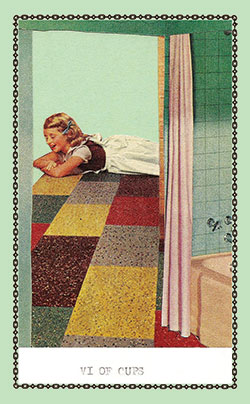 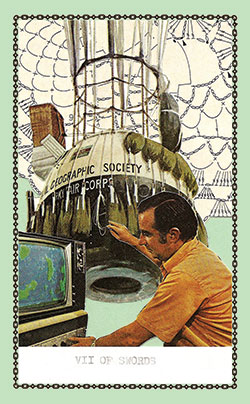 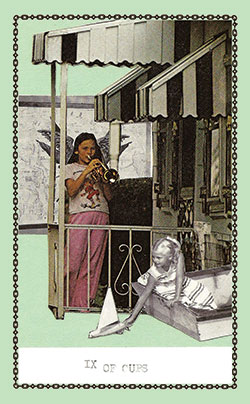 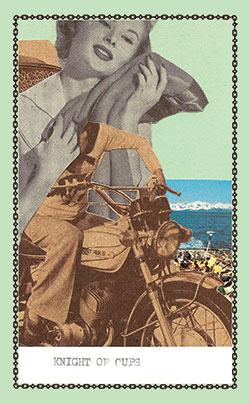 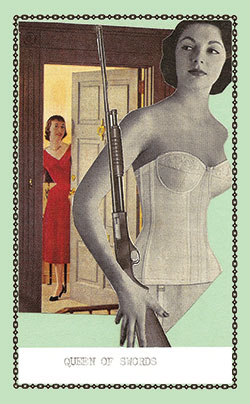 There's not a lot of decks around with a retro theme, but the Frau Grand Duchess is helping to remedy that dreadful state of affairs.

The deck is based on fifties, sixties and seventies culture and experience. It is a witty, clever, and thoughtfully put together collage deck. Sometimes eccentric, occasionally surreal, it is a landscape of mid-century modern memories. Except that, when we look at it, we can't help wondering if our memories are a wee bit skewed. Odd juxtapositions often found in collage decks are put to artistic, bizarre, and sometimes even wacky use. But the artist always gives us something to think about. The Queen of Swords, with her corset and rifle, makes us suppose that the widow of the tarot might have ended her own marriage perhaps? On the 8 of Swords, Malcolm X looks out from behind bars, into a room so cluttered with furniture, it seems he may be in a dungeon no matter what side of the bars he is on.

In structure, the deck is traditional, based on RWS meanings, with the standard suits of Wands, Swords, Cups and Coins. We also have the traditional courts of Kings, Queens, Knights and Pages. The cards measure 5" by 3". The Majors do not have numbers on the cards, but the LWB gives Justice as VIII and Strength (Force) as XI.

The cards generally do not show the pips. The minors are illustrated, revealing the meaning of the cards. But pips don't appear. At least, not always. The 10 of Swords has a pair of scissors hidden in the background. You'll have to look carefully, or you might miss it. And this is one of the things that makes the deck so compelling. It's full of surprises. The more you look, the more you find. The unexpected, and the incongruous, are everywhere. And somehow, it all works.

A nice touch is that the deck is very ethnically diverse, which adds to its depth and complexity. Typing the titles with what appears to be a classic Remington that sorely needs a new ribbon is a detail that adds to the retro vibe.

The cardstock is very nice. Flexible and bendable and creamy smooth. The cards are laminated and shuffle easily. The backs are reversible. And the fronts are 100 percent pure tarot readin' pleasure!