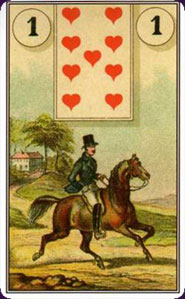 The French Cartomancy deck is a 36-card oracle, a reconstruction of a deck from the era of Mlle. Lenormand. The cards are numbered but untitled, and feature pastoral scenes with a playing card inset.


Card Images from the French Cartomancy 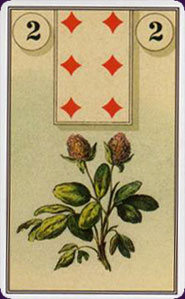 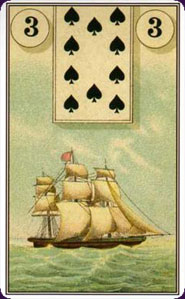 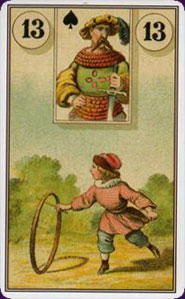 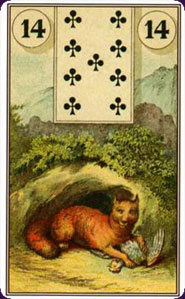 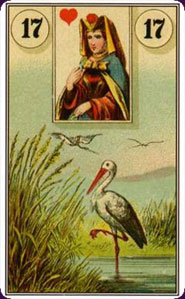 Ever seen that picture of the madam with a fancy turban, silk robes, sitting in a chair turning over cards before an eager seeker? Many believe this is a gypsy seer, but in fact this archetypal picture takes place in a French salon. The woman, usually from the middle to upper class, has a flat and not a 8’x10’ wagon for her accommodations and portrays one of the best – and worst – times for cartomancers in the history of the art. Using the Decker, DePaulis, and Dummett (1996) work, A Wicked Pack of Cards: The Origins of the Occult Tarot, as my source let me set the stage for this assertion.

Etteilla originally used what was known as a Piquet deck in his career as the first professional cartomancer. This is a deck composed from of our pack of traditional playing cards with the French suit-system (Clubs, Spades, Hearts, & Diamonds) composed of only 32 cards. A Piquet deck is achieved by removing all the twos through sixes for a descending order of kings through sevens (aces in between jack and ten). In his 1770 treatise, Etteilla gave us a single keyword for each card’s upright and reversed position and this pattern was to continue until recent with the advent of companion volumes for decks which our predecessors never enjoyed.

Mademoiselle Marie-Anne Le Normand (1772-1843), often simply referred to as Mlle Lenormand or “Sibyl of the Salons,” formed a bridge between the elite medieval royal astrologers to fortune-tellers for the masses. Mlle Lenormand, in her day, would be the equivalent if Oprah Winfrey and Sylvia Browne were combined into a single person. She never married or partnered, sublimating all her energy into a non-stop PR campaign through a series of no less than fourteen books. These works, with few exceptions, chronicled her work as a fortune-teller and confidant to the French elite in the Napoleon and Bourbon administrations. We also know she had an expansive clientele of average paying customer due to the large number of brief imprisonments she sustained for violating local fortuning-telling ordinances in both Belgium and France.

While Mlle Lenormand did list the Tarot amongst her magickal kit she would take along for a consultation, it was merely one among many and rarely used in her anecdotal accounts. So while Alliette/Etteilla was applying the insights of Court de Gebelin (the first in-print assertion of the Egyptian origin of the Tarot), Mlle Lenormand maintained her use of the Piquet deck along with other magickal paraphernalia. Though she wrote about her work with those who consulted her, she never explained her method or meaning for the cards. She further exacerbated the situation by mixing in cards from multiple decks, both Tarot and playing cards, so that no Lenormand tradition can be discerned.

Upon her death, the Parisian newspapers prophesied there would be no single heir to her mantle as “sibyl of the salons” and they were correct as many vied for the position. It was also at this time a rash of 36 card decks (like the Piquet decks, but the sixes were reintroduced into the packs) flooded the market with the name “Lenormand” affixed to them and claiming to be a replica of the deck she had used. What can be inferred from these two occurrences is the rise of a public appetite for cartomancy (including both playing and Tarot card reading) and willingness for persons (predominantly female) to fill that void as professionals and clients.

Etteilla, having died, and his school having dwindled in influence left most of these French cartomancers to use these 36 card and Piquet decks in their consultations. Further, more books published on cartomancy and Tarot began to highlight its exclusive fortune-telling role (in exclusion to high magic/occult history & practices) and associating it almost exclusively as “a pastime for the ladies.” Even Papus in his 1909 work, Le Tarot divinatoire, makes an off-hand remark “[b]ut this is not the side of it [i.e., Tarot theory] that will interest ladies who feel a curiosity about it [Tarot].” In conclusion, cartomancy had become a profession for a few as well as another amusement for women of financial means in the salons. Such would be the state of affairs for cartomancy until the next reawakening.

This particular pack is a reconstruction on one of the 36 card decks based on historical evidence and it is more truthfully titled French Cartomancy. As it harkens back to this era, buyers will still find the Lenormand name on the box (erroneously “Madame” instead of “Mademoiselle”) for historical flair. The box itself is 6.5x4.5x.75 in/16.5x11.5x2cm, which contains a short 47 page booklet (same height & width as the box) in English and a smaller box with the deck of cards. The booklet contains instructions on its abbreviations and initiating the cards before going into quite a bit of text on card meanings (38 pages worth, for both upright & reversed as well as spread-specific meanings). It also includes seven different spreads for this deck, two guided and five non-guided. While the cards also come with a traditional Little White Book (LWB), the mini-kit is much more economical compared to having to buy one of the few Lenormand guidebooks on the market. Besides, your guess of the “true” Lenormand method is as good as anyone else’s.

The cards (sixes through kings), measuring 4x2.375in/100x60mm (i.e., regular playing card size) and are composed of high quality card stock. While each card features some period appropriate 19th century pastel art, they also have a small frame in the upper middle of the card which displays the traditional playing card associated with it as well. Flanked on both sides of the small framed playing card there are also the deck specific numbers of that particular card to aid in locating the card’s meaning in the booklet. For example the first card has a circled number “1” followed by the Nine of Hearts followed by another circled number “1” while below this a 19th century gentleman is shown riding a horse in the countryside. Some of the pictures in the lower part of the cards are quite simple such as a letter or a ring while others can form picturesque landscapes with figures such as the 1/Horseman card.

This variety can be very useful for interpretative purposes and can transcend the booklet’s meanings. For example, 25/Ring could be a job offering while the 27/Letter may refer to a payment being sent to the seeker. I would even go so far as to say this may be the perfect pack of cards for practitioners from the Intuitive school of Tarot interpretation as most seekers questions revolve around mundane concerns (e.g., relationship & career questions). It is probably for reasons such as these the 36 card and Piquet decks dominated French cartomancy in the 19th century and the rationale for still doing so holds today.

This slimmed down deck is directly aimed at questions of relationship, finance, and other major concerns of contemporary seekers. Though it may lack the number of supporting helps of Tarot in general, in the final analysis ability comes through practice of the craft and application of what has been read. The French Cartomancy deck would be a wonderful addition to Intuitive and Historical school practitioners as well as persons like me who enjoy a concrete symbol of the emergence of professional cartomancy in the wake of Mademoiselle Le Normand.