Also known as The Emin Tarot

The Tarot of Frown Strong is a strong, slightly surreal majors-only deck. It has non-traditional and esoteric images, all unnumbered except for the Fool. It was designed as a shorthand series of prompts for understanding the early teachings of The Emin Society as presented by Leo in the early 1970s. The deck has been printed at three different times, but is now out of print and still sought after.

Card Images from the Tarot of Frown Strong 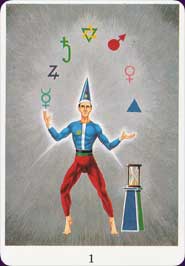 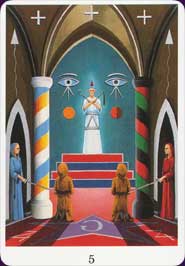 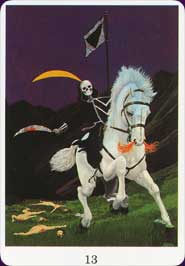 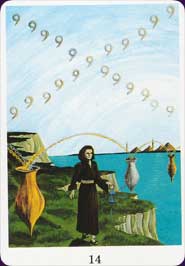 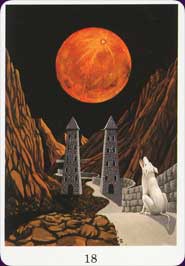 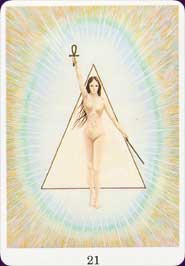 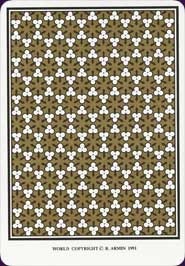 Name: Tarot of Frown Strong
Alternate Names: The Emin Tarot
Creators: Leo
Publisher: Cobweb Press 1978
Deck Type: Tarot Deck
Cards: 22
Major Arcana: 22
Deck Tradition: Unique
Minor Arcana Style: None
Major Titles: 0 The Fool, 1 The Juggler, 2 The Priestess, 3 The Empress, 4 The Emperor, 5 The Hierophant, 6 Life, 7 The Chariot, 8 Justice, 9 The Searcher, 10 The Wheel of Change, 11 Strength, 12 Hanged Man or Card of the Emin, 13 The Reaper, 14 The searcher reaches land's limits: the golden chains of speech, 15 The Green Man, 16 The Struck Tower, 17 The Star Card, 18 The Moon, 19 The Sun, 20 Resurrection, 21 The Nymph of Ability
The Fool is 0
Strength is 8
Justice is 11
Card Language: English
Card Back: Reversible
Back Design: Cross-hatched
Companion Material: A book called Frown Strong by Leo.