The Gatti deck is an Italian Tarot of 22 cards, each featuring a cat illustrated in black and white. It's the cat version of the i Cani deck, also by Menegazzi, and is a limited edition with unlaminated and slightly differently sized cards.


Card Images from the i Gatti 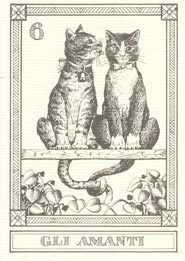 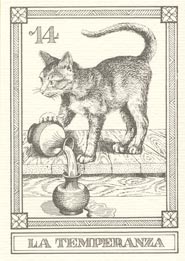 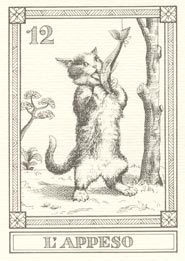 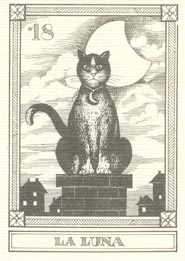 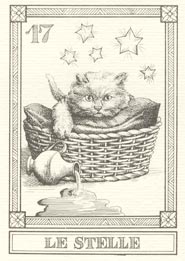 i Gatti Review by Sage Rose

The limited edition i Gatti tarot is suited for anyone who appreciates the recherche. This major arcana deck (or at least mine) arrives in a small, diary shaped box that ties with a ribbon.

Inside you will find unlaminated, slightly corregated, light tan colored cards. Each contains an old fashioned pen and ink drawing of a feline illustrating the principles of the card. The felines are engaging because they are not drawn to appear cute. In addition, each card contains only objects neccesary to create a sense of scenery and to contribute to the meaning of the card.

I have found it reads well for my single and three card readings, simple and direct.

Anyone who wants a modern, multi-colored, shiny, large deck would either dislike this deck or find it refreshing. In addition, I would not recommend it for parties because the matte cardstock would not tolerate rough handling. If a smudge appeared, I would gently dab it with a gum eraser from the art supply.

Those who would particularly delight in this deck include anyone who has taken traditional drawing classes, frequents antique stores, collects books, or simply enjoys something rare and unique.

I store my deck in the original container in a plastic container to protect it from humidity and acidity.


Complete Details of i Gatti


Similar Decks to i Gatti