Tarot of Gemstones and Crystals 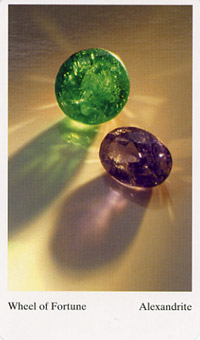 An extensive knowledge of crystal properties and the Tarot would be helpful for interpreting cards in the Tarot of Gemstones and Crystals, as each card is represented by a crystal corresponding to the particular tarot card.


Card Images from the Tarot of Gemstones and Crystals 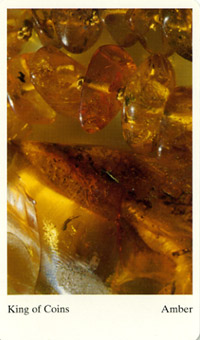 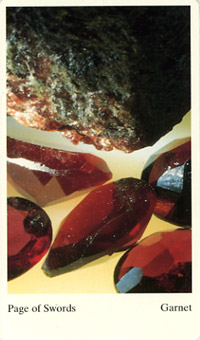 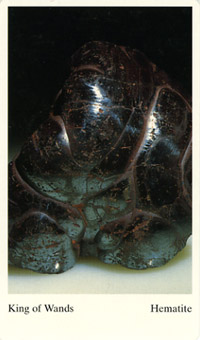 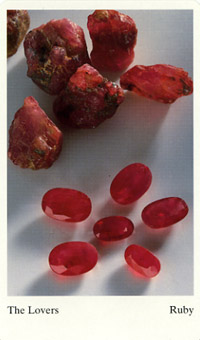 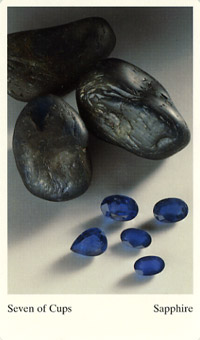 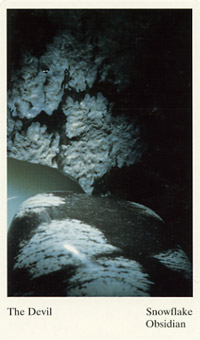 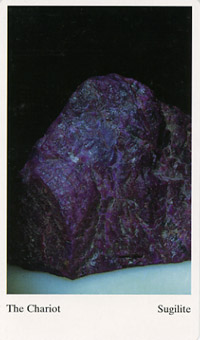 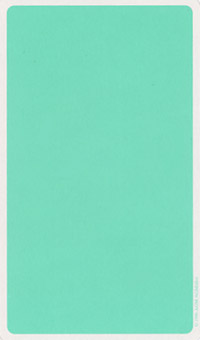 Tarot of Gemstones and Crystals Review by Nisaba Merrieweather

A few months ago I picked up a copy of The Tarot of Gemstones and Crystals, published by AGMuller, designed by Helmut G. Hofmann. It came without a companion-book, just a fairly sketchy LWB - but then, when is a LWB ever anything but sketchy? They have such tight space-restraints.

At first I was very disappointed by the deck. I no longer remember exactly what I was expecting to see when I opened it up - I certainly wasn't expecting what I got, which was simple photographic shots of tumbled/cut and raw stones on plain single-colour backgrounds. Perhaps I was expecting photocollage, with photos of stones worked into pictoral designs the way hand-drawn roses are worked into every card of the Sacred Rose deck, or perhaps I was expecting scenes set up with pieces of stone replacing the humans in more or less traditional RWS-clone designs. I don't know. All I know was that my first feelings were feelings of disappointment.

I put it aside for a couple of months, and came back to it for a reprise visit. Knowing that there was no illustrative work on the cards, I didn't have that horrible shock that I had the first time, and I drew them out of the box and shuffled them.

They are about standard Tarot-size, on good white cardstock that shuffles well and doesn't appear to have an intrusive laminate (they don't slide all over the place when you put them down, and they are not too shiny), and in keeping with the deck's theme of simplicity the backs are a plain light lime-green with a thin white border. The Majors are unnumbered, and all cards bear the card name on the bottom-left, and the stone name on the bottom-right, the border being thicker at the bottom to allow for that.

Experimentally I laid out a spread, and I found that, rather to my surprise, they read quite well. I went a little deeper into the spread, and it suddenly occurred to me *why* they were reading well. I have known Tarot since the 1970s some time, and been immersed in it since the 1980s. If you were to quiz me orally, telling me card-names when I didn't have a deck to look at, I wouldn't make too many mistakes on how I'd describe their basic meanings. I was reading from my memory of Tarot, not from the cards themselves, in much the same way I might read if I had 78 pieces of cardboard with typed names on them laid out in the spread. I found it interesting, actually, and I *will* do it again - it was an exercise in mental discpiline that I really enjoyed.

But as a result, no way would I recommend the deck to someone who wasn't very experienced and sure of themselves (even cocky, like me), because you just have nothing to go on in this deck. The LWB, like LWBs the world over, was worse than useless for divinatory meanings, although it had some interesting magical uses for each of the stones listed: many I knew, some I didn't, and some I doubted because they clashed with Magda Palmer's authoratitive tome that I bought years ago and won't hear a word said against.

My next task was to go through the Minor Arcana. I was looking for some theme linking each suit together - colour, tonal or texture qualities, perhaps, or for example in the Cups suit water-related stuff like opals, calcite, limestone, shells and amber (yes, amber - most of the world's amber is found washed up out of the Baltic Sea!). I found no such relationships in any of the suits, not even when I started looking up my serious geological texts and looking at chemical composition.

There were some stones that were obviously right for their cards: Moonstone for the Moon, for example, although it was unfortunately lit when it was photographed and one of the background pieces looks suspiciously like faded-out rose quartz to me. There were others that were just plain wrong: Onyx for Strength, for example, does not have the hardness of diamond, nor does it have the feline nature of tiger-eye. I could see why Lapis Lazuli ended up being The Hermit, although to me it was much more a High Priest or High Priestess sort of stone, but why on earth was Death Amethyst, and not, say, lead or fossilised wood, both of which have links with transformational moves from one stage of existence to another?

Some stones were very badly lit when they were photographed: Aquamarine (The Hanged Man) came out looking like a very bright green, and turquoise (the Nine Coins) was so over-exposed that it looked very like white howlite. And the Fire Opal, the Ace Wands (actually cut into an egg-shape, not a pointer) was probably the most disappointing card of the whole deck - it looked like nothing so much as a google-earth photo of the land just south of Alice Springs first, and if it had to resemble a stone at all, probably a piece of impure jasper rather than opal ...

So this is not a deck for the casual Tarot user - if you intend to use it for readings you had better know your stuff inside-out, because there is no way on earth the deck is ever going to help you during a reading. For many people, it will be a pleasing, likeable and different way to keep images of 78 different kinds of stone about their person - just shove the deck into your pocket or bag. For hard-core rock-hounds, though, there are a few cards that Will Offend. In fact, Tarotista though I am, now that the deck is spilled all over my computer table, I'm seriously considering throwing away the Ace Wands (Fire Opal)! dedicated collectors will find the deck quirky and I feel it may become a rarity in the future, but it is not the most immediately useful deck that comes to mind.


Complete Details of Tarot of Gemstones and Crystals


Similar Decks to Tarot of Gemstones and Crystals