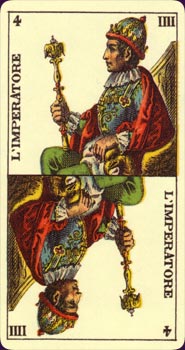 The Tarot Genovese reproduces a gaming tarot deck from the late nineteenth century. The cards look similar to the Soprafino Tarot but are double-ended, similar to playing cards.


Card Images from the Tarot Genovese 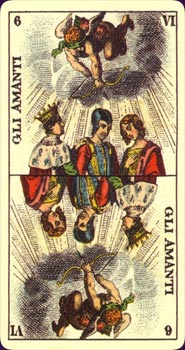 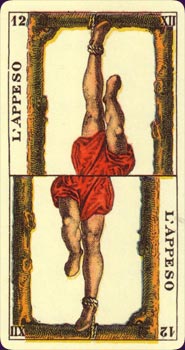 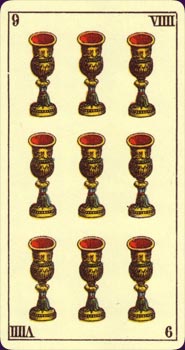 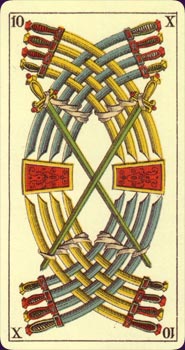 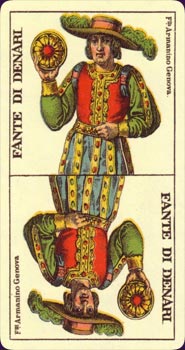 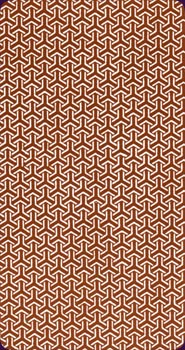 Published by Fournier, this is a reproduction of an 1887 deck which may look vaguely familiar to fans of historic decks since the artwork is not dissimilar to the so-called Soprafino decks currently available. However, what sets this deck apart from the others is that it has images which are double-ended. The effect of this is rather unnerving as it means that on first impression, the familiar scenes are randomly sliced in half and then duplicated in mirror image. It means that the Hanged Man, for example, depicts two pairs of legs, two pairs of tree trunks and not much else. The Tower has a slightly surreal, suspended double-ended tower, battlements at either end, creating a very odd effect, not to mention considerable impact. The Moon has two disembodied dog heads afloat in the middle of the card. It should be added that only the Majors and court cards are double-ended. The pips do not have that “sliced in half” effect. They are depicted in their entirety which means that although you cannot tell whether the Majors or court cards are reversed in a reading, you can tell if a card from the suit of Cups is. This deck could not, however, be used effectively for reversals. The backs of the cards would offer no clue either as they contain a very uniform, attractive, tightly-knit and unobtrusive geometric pattern in dark sepia which is non-reversible.

I was intrigued by this deck long before I received it as a gift. I kept seeing it in shops but never got round to buying it. The double ended images create a striking effect, but at the same time it is worth bearing in mind that as the image is sliced in half, a significant part of the card is lost and one is essentially reading with half an image. It doesn’t bother me as I am familiar with these images in their entirety from the almost identical Soprafino decks, but it might be strange for some people to feel that they are reading with half an image.

I have been able to find out very little information about this deck, except that it was published by Fratelli Armanino in Genoa, 1887 (information taken from the Ace of Coins, which bears a stamp 11th August 1887), and this same name appears down the side of the court cards. The Genovés Tarot is from the Fournier Playing Card Museum and the accompanying LWB is merely a generic history of tarot with no direct relevance to this specific deck. The LWB is in four languages (English, French, Spanish and Portuguese) and would be reasonably informative for a beginner, although I felt that the card meanings were largely Rider-Waite and that a LWB for a deck like this would benefit from maybe including an introduction to numerology for reading with non-scenic pips. I found myself wondering whether this rather non-specific LWB had been designed for inclusion with other tarot decks and not just this one. Reversed meanings are included and only the Celtic Cross is included as a spread.

The cards themselves feel good in the palm of the hand. The cardstock is excellent, not too laminated and I would say that this is my ideal size for a tarot card; just a couple of centimetres longer than a playing card but more or less the same width. They shuffle comfortably and this deck, despite its peculiarities, is very attractive. The colours are muted and appear to have been stamped on, which means some colours are superimposed slightly upon others, bleeding into them, and sometimes the colours go beyond the outlines, creating a slightly naďve feel which suits the feel of the deck, as you are reminded that this is something which came off a printing press and was not touched up, and Fournier do not appear to have tried to clean it up in any way. The card backgrounds are not white, but are a light ivory colour and have the occasional blot. The quality of the colouring is not as crisp as some might expect, when compared to other, similar decks on the market, but for me this was part of the charm.

I would recommend this deck to lovers of historic decks and those in the Soprafino style, and also to those comfortable with non-scenic pips. Because of its size, it is a very practical deck to carry around or have as a slightly larger than usual pocket deck. It is compact and well-produced and yet has that air of mystery which some of us like to feel in our historic decks, and – because of the unusual severing of the image – has an added quirkiness which querents immediately respond to.