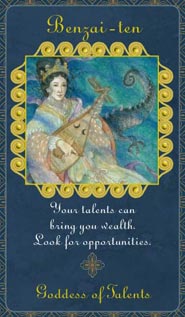 The Goddess Inspiration Oracle is an 80-card deck from talented artist Kris Waldherr, creator of the Goddess Tarot. The art shows 80 goddesses from diverse cultures and traditions, and both well known and lesser known deities. 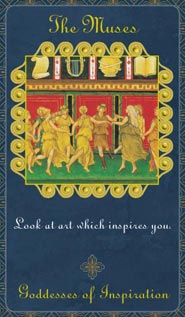 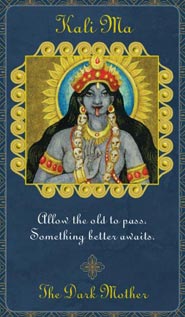 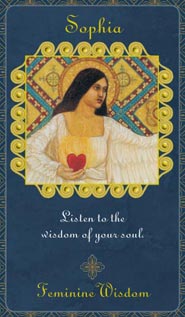 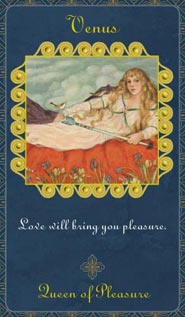 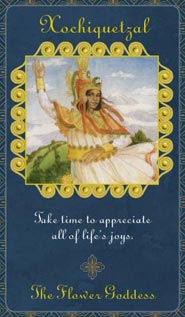 The artwork for this deck is based in part on Waldherr's book "The Book of Goddesses", which is not only an outstanding work of art, but also the result of serious research. The 80 Goddesses presented in this deck are representative of diverse cultures and traditions, and form a highly usable tool for accessing the divine feminine within. They include well known figures, such as Athena, Isis, and Venus, as well as lesser known figures, such as Abeana (Goddess of departures), Baba Yaga (Goddess of Change), and Glispa (Goddess of healing).

Waldherr indicates that the majority of the art included in this deck was created for the tenth-anniversary edition of the "Book of Goddesses". Other art appeared in her earlier works, including "Sacred Animals", "Persephone and the Pomegranite", and "The Lover's Path Tarot". While some of the Goddess paintings were reproduced in the "Goddess Tarot", they are presented here in a different format.

The companion book has a full color cover, featuring a feminine figure in a red dress on the front cover, and a back cover in gold with spiral-like figures on it, with a Moon Goddess in the center. In her introduction, Waldherr defines inspiration as taking spirit into ourselves. She goes on to say that inspiration opens up possibilities beyond what our rational mind can perceive. Goddesses through the ages have been known for their ability to encourage inspiration … what we have here is the wisdom of the Divine Feminine acting as a gateway to inspiration.

I found it interesting that Waldherr defines oracles as being both the vehicle for the message, and the message itself. Waldherr sees her messages as offering creative solutions, Whereas one of her previous works, "The Goddess Tarot", offered wisdom through the venue of Tarot, Waldherr see the "Goddess Oracle" as opening this knowledge to those who do not necessarily work with Tarot. I am blessed in that I work with Tarot and non-Tarot oracles, and can appreciate, as well as reap the benefit from, all of Waldherr's work. Incredible artistic talent, combined with a bent for serious research, is a trademark for Kris Waldherr!

In explaining how to use the oracle, the point is made that "nothing needs to be memorized", that the cards can be used straight out of the box … all the Seeker needs to do is be present with a receptive nature. Each card shows a portrait of a Goddess, lists her primary attribute, as ascribed to her by her culture, as well as a short message, inspired by the Goddess and her story.

Waldherr suggests becoming familiar with the cards themselves before referring to the book. She suggests several different ways to get to know the deck, and includes the following prayer, excerpted from the Navajo "Beauty Chant":

In her section on using the cards, Waldherr recommends that the cards be selected randomly. They can be used alone, or in spreads. A four-card past/present/future spread is presented, with the fourth card representing a summary of the situation being looked at. Other suggestions for working with the cards includes using them to create affirmations, and working with them in a creative manner (i.e. when you are stuck in a project and do not know how to move forward).

The box that the cards and companion book come in is a sturdy cardboard, with a lift-off top. (I truly appreciate this type of box … it gives easy access to the cards, and hold up to heavy handling.) The cards themselves are approximately 2 ľ" by 4 ˝", of sturdy, glossy card stock. The backs show a golden background, with a dark gold Ľ" border, and a lighter gold inner section with a spiral-type imprint. In the middle of the card is a Moon Goddess graphic.

The card face shows a Ľ" dark, patterned border, followed by a dark inner background. There is a gold scroll-like border around a center square picture that represents the Goddess. The name of the Goddess is in gold text, above the picture. Beneath the picture, in smaller, white text is the message for that Goddess. At the bottom of the card, in gold script, is the attribute for the Goddess.

The artwork is part fantasy, part reality. The colors are intense, and the details incredible! Each and every card drew me, for different reasons. The very first card, Abeona, drew me because of her attribute … she is Goddess of Departures, and this is a time in my life when some things are ending, and I am moving on to new things. Very apropos! Ajysit, Goddess of Birth, drew me because of her quiet, serious nature. Her message is "Look for help to appear when you most need it." Athena drew me because she is connected to a time when I was young, and had just joined the military.

Benzai-ten drew me because of the oriental style of the portrait … her attribute caught my eye in a secondary manner, and stunned me … she is Goddess of Talents. The Goddess Demeter is shown with arms outstretched, in the middle of a forest. Her attribute is that of The Mother, and her message is "Honor the divinity of your grief. Then spring will return." Fortuna … the Goddess of fortune, here shown with a flowing blue blindfold … how could I not like her!

Haltia, Goddess of the Home, depicted here as a feminine face and hand, superimposed over a home-like structure, blends the worlds of fantasy and reality. Heget, Goddess of Fertility, is depicted as a lovely green frog, with hieroglyphics depicting birth on the wall behind her. His Wang Mu, Goddess of Eternity, draws you straight into her card! Her message is "Find what is eternal within yourself." Hyggeia, Goddess of Health, shows a cadusis behind the head of the Goddess, with her message reading "Healing lies in prevention. Treat your body with respect."

The following is an excerpt from the "Goddess Inspiration Oracle Guide":

Originally worshiped in ancient Rome as the goddess of departures, Abeana protected children as they left their home to enter the great world. She watched over them as they took their first steps, helping them guide one foot in front of the other. In this way, a child is able to explore wider realms: a hallway leads to a room, a room to a gateway, a gateway to the outside world.

In the eyes of the universe, we are all children. Whenever we start something new, it is as if we are learning to walk for the first time. We may stumble initially, but if we persist, we will discover new vistas beyond what we originally expected. Beyond your home is a world to be discovered. Explore it.

Each Goddess will walk into your life in a very different manner. The energy this deck presents is a very strong one. My suggestion might be "If you are not prepared to hear the answers, do not ask your questions of this deck."

“We are meant to be filled with joyful inspiration to spill over with exuberant spirit. May the Goddess Inspiration Oracle animate your life with inspiration, providing you with an intimate experience of the Divine Feminine.”

The eighty cards of the Goddess Inspiration Oracle – it’s bigger than a tarot set - show female deities from around the world. Most goddess oracles have thirty or forty cards, but this is a much more comprehensive presentation of the aspects of the Divine Feminine, “intended as instrument for inviting the inspiration of the Divine Feminine into our lives when we most need it”.

The goddesses were chosen from an even larger list of over a hundred goddesses that Kris Waldherr has ‘described in art and words’ throughout her creative life. The watercolour goddess images appeared in the Lover’s Path Tarot, the Goddess Tarot (in a slightly different form), in her books Sacred Animals and The Book of Goddesses, though the painting of Gaia was painted especially for this deck.

The deck is intended to be accessible to anyone, regardless of your knowledge or oracles, divination, or goddesses. There’s no card meanings to remember or difficult system of correspondences – it can be used straight ‘out of the box’. Nor does Kris divide her goddesses into good or bad – they are not limited or constrained by these definitions, but they all offer positive, nurturing inspiration.

The face of the cards shows the goddess name at the top, a square central artistic image of the goddess or her essence, then below a short phrase of advice, then a kind of subtitle for the goddess. For Athena, her advice is ‘Be independent. Listen to the wisdom within yourself.” And her subtitle is ‘Goddess of Wisdom’. The first reading I did with the Goddess Inspiration Oracle was a simple one-card drawing, for the wisdom I most needed to know that day. I received Pele, the Goddess of Fire, who stands with her arms raised, her face calm but defiant, a lei around her neck. Her advice on the card is to ‘be empowered by anger’. Both Pele’s background, associations and her advice are further explained in a page of the companion book.

Not all of the goddesses on the cards are as easily recognised as Athena or the other Greek or Roman goddesses – there are many lesser known names from Hindu, African, Japanese, or Russian cultures, and many more. Their names may less well-known – Abeona, Benzai-Ten, Cimidye, Erzulie, Hygeia, Lalita, Ogboinba, Zhinua – but are no less powerful for that.

The set comes in a square cardboard box with a lift-off lid. Inside is a gold organza tarot bag, a square 112-page book, and the pack of cards loosely set into a cardboard inset. The backs of the cards shows a ‘serene moon goddess… She is Everywomen, ageless and raceless’, set on a goldish swirling background.

I like the scope of goddesses of this deck, and the range of simple advice offered in the eight cards of the Goddess Inspiration Oracle. Kris Waldherr creates tarot and oracle decks that are beautiful in both artwork and presentation, and this deck is no exception.