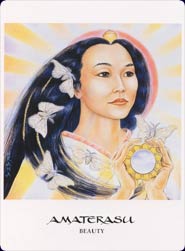 The Goddess Oracle is a beautiful deck that combines pictures of Goddesses from cultures around the world, with Goddess poetry, ritual and mythology to be used for guidance and insight and well as an oracle.


Card Images from the Goddess Oracle 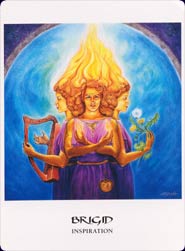 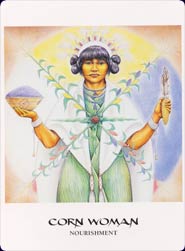 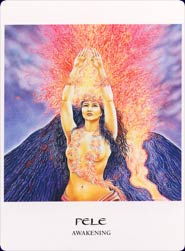 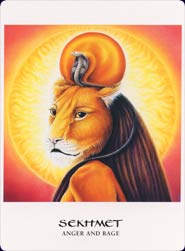 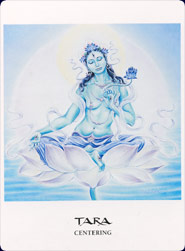 This set comes with 52 cards and a 188-page, paperback-size book. The cards are 13.3cm by 9.5cm (5 1/4 by 3 3/4 inches), a bit too big to shuffle comfortably. The back is non-reversible and shows a sibyl holding a bowl with smoke rising from it, all done in shades of grey. Each image has a white border, adding to the feeling of clarity and unclutteredness.

Most of the book is taken up with the cards, giving the goddesses in alphabetical order. For each goddess there is a black-and-white image of the card, a poem, a “Mythology” section, a “Meaning of the Card” section, and a “Ritual Suggestion”. I like the poems, but the mythology section for each card is a bit short for my tastes, just a single paragraph. The meaning gives several statements or descriptions of each goddess’ energy and then offers questions to divine that energy in your own life.

The best, and longest, section for each card is the ritual suggestion. These are suggested path-workings for each card, and could easily be recorded, or simply read a number of times to cement them in your mind. Occasionally, I felt these path-workings strayed rather far from the image on the card, though staying within the energy of the goddess. However, they are all intriguing, and those I have tried have been powerful.

The book offers three spreads: the Yoni three-card spread, the Place of Opposites four-card spread, and the Goddess Support Group spread, with as many goddesses as you feel you want or need. There are also sample readings with the first two of these spreads. I especially like the Yoni spread, which looks to three aspects of the Goddess in three areas of your life, and can also be adapted nicely to different definitions of the triple aspects of the Goddess. I also love pulling a single card to define the goddess energy for my day or ritual, or to choose a path-working.

As for the cards, they are really beautiful! Each shows a detailed image of a goddess, with realistic backgrounds and supporting characters in the form of animals, plants, symbols, colours, and other people. They also have a key word, as well as the name of the Goddess. I also love that they depict a real variety of women of all ages, from pre-teen to crone, all body types, and different racial types.

Some personal favourites are:

Oya: a strong, mature woman of African descent, in a fuchsia cape of tornadoes, with lightning forking down at her command. She is regal, and in control, flowing with the changing winds of the storm.

Cerridwen: portrayed as a mature woman in a hooded cape, with behind her the changing faces of the moon as her own face peeking out more or less from the hood/moon. In front of her is a huge cauldron, and in her hand she holds a mushroom. Within her cowl, her hair mingles with flowers.

Brigid: a triple-headed goddess, with flames blossoming from all three, identical, heads. One set of hands holds a harp, the centre image holds flames in both hands, and the final part holds flowers. In the background is an arch into a world of sea blue and green, with triple spirals in each of the top corners.

Kali: a very powerful figure, grey outlined in blue, with a dark blue-black sky background filled with stars. Kali dances on tiptoe, with a multi-triangle in a circle starting at her toe tips. She wears a belt of hands and a necklace of skulls, her earrings are cobra heads, her red tongue is out, and her hair flies back to become the black of the sky. Her palms are red, and each of her four wrists is entwined by a snake. In one hand she holds a sickle, in another a spindle. This is a fearsome, strong, yet not cartoon-ish depiction of Kali.

Uzume: a Japanese woman, with pendulous breasts showing as she does a lewd dance to tempt Amaterasu (the Japanese sun goddess) out of her cave. She dances on a basket, with bells in one hand and a beribboned branch in the other. Her yellow kimono contains a triple whirling pattern in green, and the undercoat is red. Uzume’s headdress has more bells, as well as a crescent moon, and behind her are tall, marshy grasses, standing out blue against a lilac sky.

Lady of Beasts: a heavily pregnant woman reclines on a chair that can barely be discerned behind the bodies of the beasts that surround her. All are pregnant. There is a lion, a bear, a horse, a deer a wolf, a snake and a dove. A half-lemniscate pattern of the changing faces of the moon appears as reflections of light dancing on them. All the animals are close together, despite their different natures, as all try to get close to the Lady.

Kuan Yin: a beautiful, youthful Chinese woman holds a blossoming lotus in front of her heart, and wears a moonstone over her third eye. Behind her glows a warm sun. She wears a simple dress and veil of pure white, with a red lotus headdress to hold the veil in place. This is an image of exquisite simplicity and purity.

I’d recommend this deck to anyone wishing to explore goddess energy in their life or in their readings. The artwork is realistic, beautiful, with a great variety of colours, and although there is some nudity, it is never gratuitous.