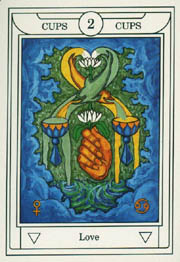 The Golden Dawn Magical Tarot uses symbology and colours as adhered to by the Order of the Golden Dawn. The major arcana show abstract and very vibrant scenes, but the minors are overly repetitive. Little changes between the cards of a suit but the number of cups or pentacles. 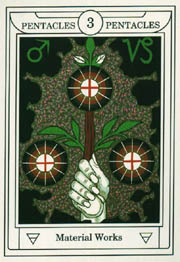 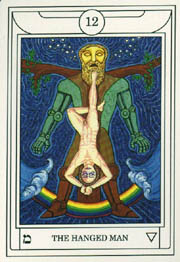 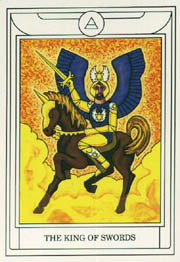 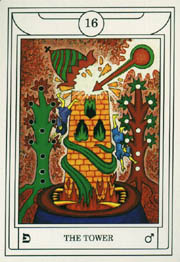 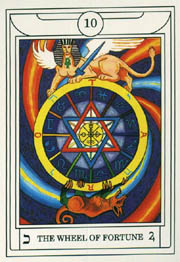 I truly have grown fond of Tarot decks with a great deal of esoteric imagery, so it was a joy to review this deck. I was fascinated to learn that it had first been comissioned by Isreal Regardie for work by the Golden Dawn Society. (Yes, by name I knew that this was where the deck originated, but I did not know the "story behind the story" - that which makes decks come vitally alive.) The "Golden Dawn Magical Tarot" is intended to be used for work within the system of symbolic and ritual requirements necessary for Golden Dawn cabalistic work. It can be used, however, by Tarot students at any level for divination, meditation and ritual work.

The 177 page LWB that comes with this deck is quite interesting on its own - and very well written. Tarot students at all levels would be able to comprehend the message here. The emphasis is that, aside from being a divinitory tool, the Tarot has many levels of wisdom contained within it. There is a nicely done section on the origins of the Tarot, followed by Tarot's connection with the Golden Dawn.

There is a well done section on Qabala and the Tree of Life, complete with diagrams and a discussion of the Sephirah's. The four qabalistic worlds are discussed in connection with the Tree Of Life. There is a chart covering the major arcana that is a true joy to read, with its astrological, numerological and Hebrew attributes. (The only problem here is the the book is only slightly larger than the cards - so the type of the diagrams and tables is oh so small!)

The section on the minor arcana talks about the attributions to the four elements and teh four Qabalistic worlds, as well as to the Tetragrammaton. Pips 2-10 correspond to decants of the zodiac (the Aces are not included because the symbolism of Kether is the primary influence. The court cards are seen as representing the the elemental forces of the Tetragrammaton (YHVH) in each of the four Qabalistic worlds. Each court card represents a sub-element in its particular system.

Each suit in the Tarot carries the color that represents its element: Wands (Fire) is red, Cups (Water) is blue, Swords (Air) is yellow and Pentacles (Earth) is brown. Each element has two "flashing", or complimentary colors assigned to it. In this manner, entering the astral and elemental planes is made easier.

At the end of the book, there is a quite unique section on reading the cards, with a short discussion on card groupings (a majority of of Trumps; a majority of Wands, Cups, Swords or Pentacles; a majority of each of the pips or court cards), on possible influences when two suits rule the spread and on calculating time. Several spreads are presented, including ten and fifteen card spreads, the Opening of the Key Spread, horeshoe and astrological spreads. Ritual work is also presented in a very basic manner.

The cards themselves are on glossy card stock, 3 1/8" by 4 5/8" - a nice size for small hands to work with. The backs have a stark black background, with a large red cross above, and connecting to a large white triangle. The middle of the triangle is black, and contains a yellow semi-circle, with a thin red semi-circle creating a border for seven black circles within the yellow semi-circle.

The Major Arcana all have pictures, as do the Court Cards. The Pips are simply the symbols of their respective suits. I found all of the Aces to be intense cards - very easy to use. Other cards that drew me to them were The Fool, which shows a child with a wolf on a leash - reminding me very much of Coyote in Native American legend; the Two of Cups, with a hand holding a flower between two cups; the Wheel of Fortune - a very symbol intense card and Death, which shows a dancing skeleton with a smile on his face.

Human figures are done in a not too realistic manner in this deck - and with considerable nudity, although it is not done in an offensive manner. There are, however, some really good cards: Temperance, a very intense and lovely card; The Star, filled with symbols yet getting the point across with one glance; The Empress, another lovely lady surrounded by symbols; the High Priestess, with two sets of arms that just seem to belong there and The World, with the symbols of Man, Eagle, Lion and Bull surrounding the twelve astrological symbols.

The more I work with this deck, the easier I find it to use. At first, I thought it might be an "interesting" deck that was used for reference and personal work. It certainly can be used for that, but I feel that it could be used by any level of Tarot student to good effect.

The Golden Dawn Magical Tarot deck comes in a small compact cardboard box, the cards contained in a separate second box from the instruction book. This deck's packaging is totally unlike the usual Llewellyn tarot box, and a vast improvement. The tarot cards themselves are beautifully printed on thin and flexible card stock and shuffle well.

The scenes in the major arcana cards have stylised, brightly coloured and contrasting artwork with semi naked human figures. The borders incorporating astrological and Hebrew symbols in the borders. The minor arcana are unoriginal and repetitive. It seems like the author spent all their time on the first twenty two cards, then rushed through the final fifty four with only Aleister Crowley's Thoth Tarot for inspiration.

All the cards have magical symbols in the white borders surrounding the central scene. The majors have an Hebrew and an astrological symbol; the minor cards have alchemical symbols.

It's not a deck for everyone. The major arcana are very striking, but the minor arcana do not have enough detail to be easily distinguishable for beginners. People familiar with the Order of the Golden Dawn and with an interest in the ritual and symbolism of Western Ceremonial Magick will get the most out of the Golden Dawn Magical Tarot.