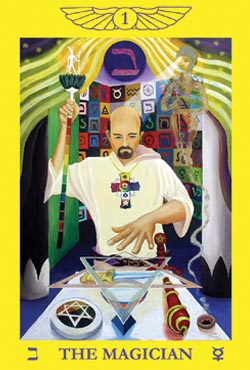 The Golden Dawn Temple Tarot is a modern interpretation of the Golden Dawn's Book "T". The 79 vibrant cards are painted with up-to-date colour theory, and bordered to match their Tree of Life or elemental attribution. The deck is designed for Temple use, as well as individual meditations and esoteric study. 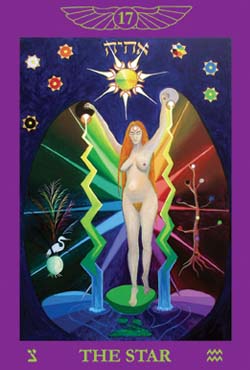 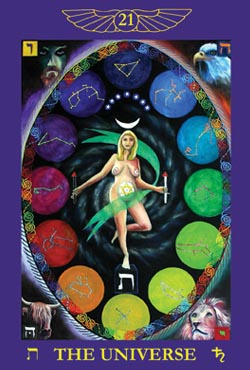 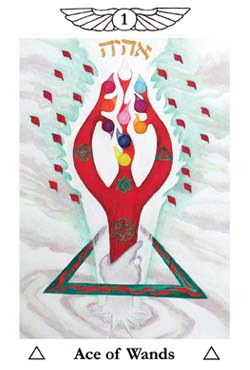 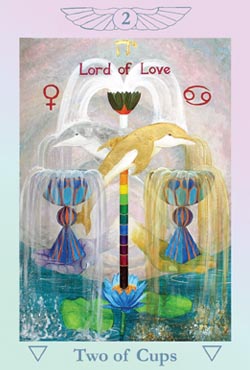 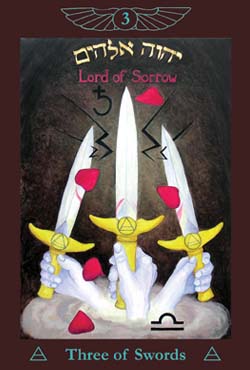 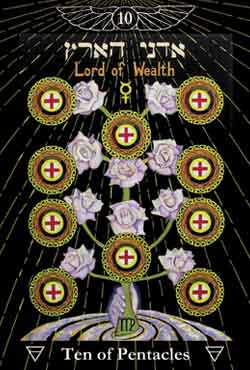 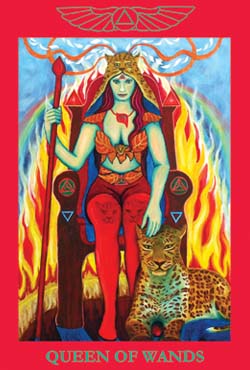 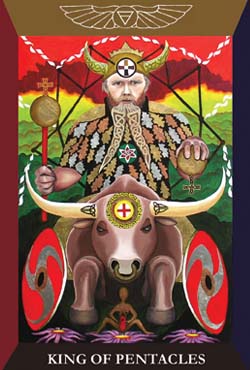 The Golden Dawn Temple Tarot was created by Nick Farrell, Harry Wendrich, and Nicola Wendrich. The deck is published by Wendrich artHouse and is comprised of 80 vibrant cards that measure 3.5 x 5.25 inches. The backs of the cards are solid dark green.

This deck is packaged in a standard tuckbox with a booklet. Its cardstock is pliable and manageable for shuffling. The cards are large enough for the details in the artwork to be easily distinguished, making this an excellent deck for study and meditation.

The booklet’s introduction explains the choices that the creators made concerning the deck’s composition and provides additional information for getting the most out of the cards. However, familiarity with Book “T” and other supplemental texts may help you to maximize this deck’s utility as the booklet is not intended to elaborate on all of the symbolism and systems that have been incorporated into this Tarot. I do think the creators made excellent choices concerning the most pertinent things to include and what elements to leave to the primary sources or expand upon in their other publications.

Each card’s entry includes its title (i.e. “Lord of Wealth” for the Ten of Pentacles) and a list of keywords for both well and ill-dignified positions. For the Minors the decan and Sephira are also included. The Court Card entries list the decan and elemental associations in addition to the keywords and titles.

The booklet also provides a 15 card spread and a concise explanation for getting the most out of the information it yields. Extra information on interpreting the Court Cards within a reading is included at the end of this section, and I found it very helpful.

The artwork in this deck is vibrant and filled with details. The original paintings are oil on canvas, and I am quite fond of the way Harry and Nicola Wendrich used this medium to portray textures and folds of clothing, especially in the High Priestess card. The images are skillfully rendered; the hands grasping the suit symbols throughout the Minors are exquisite, as are the lifelike roses in the suit of Pentacles. The Chariot was another one of my favorite images. The horses are clearly pulling in opposite directions and look like they are about to charge out of the card.

Color is of key importance in this deck. The Golden Dawn’s color system is utilized and updated to implement magenta as a primary color. The creators explain that because red is made by mixing yellow and magenta, it is magenta that should be utilized as a primary color, and they make the appropriate adjustments within the deck to accommodate this alteration. The Five of Cups and Judgement are the most notably affected by this change as pure magenta is utilized in these cards.

The border color of each card corresponds to its color association, and pertinent symbols appear in the corners. For the Majors this includes the Hebrew letter association and the planetary, zodiacal, or elemental correspondence. The Court Cards and Minors are labeled with the alchemical symbol of their suit element. The astrological correspondences for the Minors are incorporated into the illustrations as described by the Golden Dawn in Book “T”.

I went through this deck card by card with Book “T” handy, and was impressed by the overall adherence to the Golden Dawn’s guidelines throughout the Minor Arcana and the Court Cards. It is worth noting that the creators chose to depict the Kings in chariots as outlined in Book “T”, and assign them the divinatory meanings, decans and titles that match the Knights.

The Major Arcana in this deck also incorporate the Golden Dawn’s specifications. For example, The Lovers card depicts the tale of Andromeda and Perseus, rather than the more common Biblical scene in the Rider Waite deck. Symbolism fills the cards, giving the reader a great deal of information and associations to consider within a reading or meditation. The colors, astrological symbols, Hebrew letters, and mythological inclusions are welcome reminders of card themes and correspondences, and they are well incorporated into the illustrations. The deck delivers a unique and inspired vision while remaining true to the framework of the Golden Dawn tradition.

The Golden Dawn Temple Tarot includes an extra Temperance card and a Cover Card. The extra Temperance card is described as a ritual version, and I think it exhibits the core principles of union and blending in an exciting way. Leo and Scorpio, fire and water, are depicted with the Temperance angel bringing their energies into harmony. I think this card is a dynamic addition to the deck. The creators describe the Cover Card as “the Rose and the Ankh, incorporating the 22 Major Keys of the Major Arcana and their Titles, and the Four Elements of the Minor Arcana, symbolizing the Tree of Life before the Fall. Surmounting the Rose is the name HRU, the Angel of the Tarot.” I think this gorgeous card truly crowns the deck.

Everything that the creators have placed in the cards was done with purpose and intent, and the passion and reverence for Tarot is apparent in every image. Their vast knowledge has motivated me to delve even deeper into my own Tarot studies. I found this deck to be a strong reminder that I am forever a student of Tarot. There is always so much more to learn and so much more intricacy to be uncovered.

The Golden Dawn Temple Tarot was seven years in the making, and the passion and dedication shines through in every card. It is a truly impressive creation. This Tarot is an excellent choice for those who are seeking a solid deck for meditation, study, or reading. It is true to the Golden Dawn’s vision and radiates spiritual dignity.