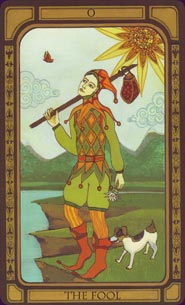 The Golden Tarot is inspired by both the Rider-Waite and historical Visconti-Sforza decks. The art is attractive and suitably historical on the majors and the court cards, but the suits are relatively plain, undecorated cards with pips instead of illustrated scenes. Not to be confused with Kat Black's Golden Tarot.


Card Images from the Golden Tarot 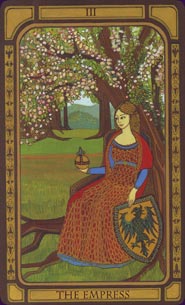 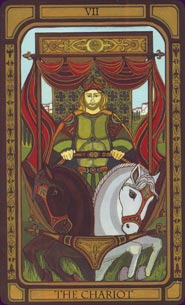 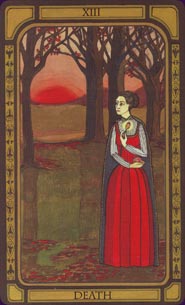 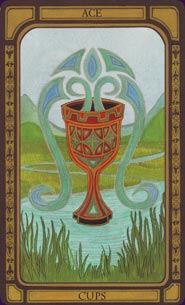 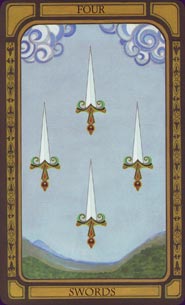 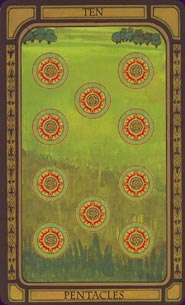 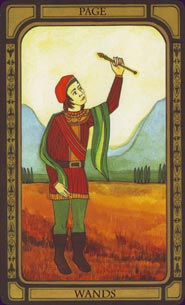 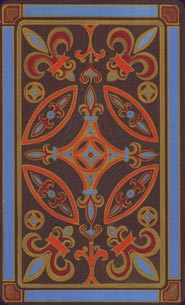 The Golden Tarot is a mix of the imagery of Visconti-Sforza, the Rider-Waite and some additions of its own. It has a very Renaissance feel in costume and decoration, and smooths the edges of the traditional symbolism to make a gentle, attractive tarot.

The first impressions of the deck are positive. It looks like a slick and polished set; the gold matte box matches the book with matches the backs of the cards. The outer box is extremely sturdy, with a slide-off side lid and the book and cards are held protectively inside. The cards are large - but not overly so, they’re big enough to show the illustration to good effect but still be easy to shuffle - at 13cm by 8cm and have a heavy gloss lamination.

In titling the deck follows the Rider-Waite outline – the suits are Cups, Pentacles, Swords and Wands, and the court cards are Page, Knight, Queen and King. In structure it owes the most to the Visconti: Justice is placed at VIII and Strength at XI, and the numbered minor arcana cards are pips, rather than the illustrated scenes most often attributed to the Rider-Waite. They are unfortunately also very repetitive, without the ornate curlicues and flowers often on the historical decks; the 2 – 10 cards show exactly the same suit emblems on the same background, simply duplicated and rearranged.

In the major arcana, the Fool and Strength are very similar to their Rider-Waite counterparts, but most others are a mix of the traditions. The Empress has elements of the Visconti, such as the shield in her left hand, but she is placed in the lush outdoor setting of the Rider-Waite. Of all the majors, the Hierophant is perhaps the most like the Visconti original, especially with the patterned background behind.

Some of the more potentially confronting imagery common to both the Rider-Waite and Visconti has been smoothed away for the Golden Tarot. Death is unique to this deck; instead of the traditional skeleton with scythe cutting down people, there is a sad woman in red holding a rose, standing in front of almost leafless trees and a red setting sun in the background. Judgement is a little prettier: it keeps the angel with trumpet over a cemetary, but here all we see are the headstones – noone is rising from the graves.

In addition to the cards, there is a bound 64-page book with glossy white, full-colour pages. It has a quick introduction to tarot and the deck’s concept, how to begin a reading, five spreads to try, and info on timing and prediction in readings. The card meanings are most detailed for the major arcana – there is a large colour image of the card, keywords, the associated planet or sign, a description, upright and reversed meanings, and a small reversed image. The minor arcana meanings are sparser and has just the title and upright and reversed meanings, accompanied by a smaller card image.

I did wonder why this deck was confusingly given the same name as Kat Black’s popular Golden Tarot from US Games. The book explains that it is named after the two ‘golden eras’ of tarot reading, the gold-embossed Visconti-Sforza and the Rider-Waite Tarot (though there is not a lot of evidence that shows that the Visconti deck was used for readings at the time of its creation).

The original idea for the Golden Tarot was strong, and the cards have been attractively illustrated, but I feel it could have been better still. I was most disappointed by the lack of scenes of the minor arcana cards, and the fact that they are less decorated than even those in the Visconti Tarot. That said, it’s a gentle deck, and suitable for those who like to work with European-style decks but would prefer one with a decent guidebook in English.