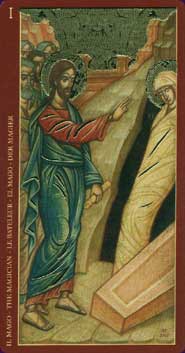 Golden Tarot of the Tsar

A luxurious looking tarot based on the iconic art of Russian Orthodox Christianity. The Golden Tarot of the Tsar is one of Lo Scarabeo's metallic decks - the saints and biblical scenes have textured gold backgrounds.


Card Images from the Golden Tarot of the Tsar 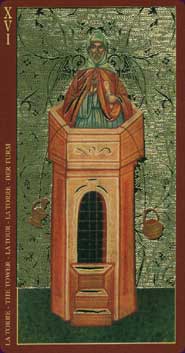 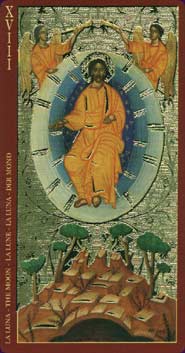 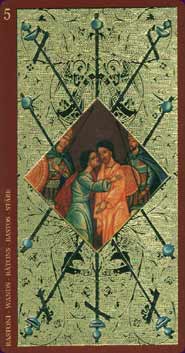 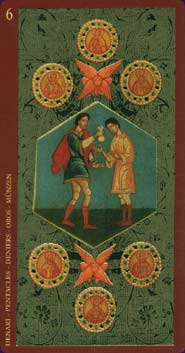 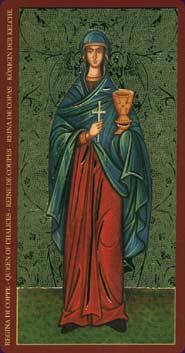 Despite the aristocratic title, this is not a deck devoted to the Russian Tsars, but a deck with its basis in the images of the faith of Russian Orthodox Christianity. The veneration of religious images - icons - is a very old tradition, brought to Russia from Byzantium in the earliest days of Christianity, when its worship replaced that of pagan divinities and ancestral spirits. The ritual use and doctrine of icons were codified and defined in the 9th Century CE, and the artistic code established at the same time set out the rules of iconography. The prescribed pattern, composition and distinct characteristics have changed little since that time., as icons were not intended to be a product of the artist's imagination, or to depict exactly an image of physical reality, but to represent a spiritual ideal and assist contemplative prayer. They illustrate the life of Jesus, Mary, the Saints, and biblical stories and are not meant to appeal to our aesthetic sense, but to be holy.

In the Golden Tarot of the Tsar, Atanassov has melded iconic images with the seventy-eight card tarot structure. Iconic images have 'odd' proportions, a flatness and lack of three-dimensional perspective, and these cards are no exception. The art has no direct light source, and hence, no shadows. Humans are tall and lean, their faces characterised by large eyes, a long thin nose and small mouth.

The majors show predominantly saints and religious figures like Jesus and Mary, full-length and facing us directly. The minors are pip cards, but also have small illustrative scenes as well, placed in a geometrically shaped inset in the middle of the card. For Cups, the inset is a square, for Wands, a diamond, Swords a circle and Pentacles a hexagon.

The Golden Tarot of the Tsar is one of Lo Scarabeo's metallic decks and has the tarot scenes set on a shining textured gold leaf background, and contained by rich dark red borders. Card titles and numbering are very unobtrusive, being in a small font on the far left hand side, allowing the card imagery takes precedence. The card backs show a mirrored picture of Jesus, and are suitable for reversal.

The booklet accompanying the deck is the standard leaflet packaged with Lo Scarabeo decks. (One day, I'd like to see companion books for decks like the Golden Tarot of the Tsar; their historical and spiritual depth cannot be adequately explained on fourteen small pages!) The booklet gives the name of the saint, historical figure or scene depicted on the card (all except the court cards), a (very) few words of divinatory meaning, and a new eleven card spread called the Orthodox Cross.

Though this deck is an experienced tarot readers' deck and requires a level of knowledge for full appreciation, it is definitely worth having in the collection just for periodic admiration of its visual splendour.

I realize there are many people who might wonder if this is just another rewritten and repainted 'tarot with Bible story' motifs. My review is from experience of one who did grow up with many Protestant Christian influences, but my review is also from the slant of someone studying Western humanities in more detail, seasoned with delight in Dante, Gareth Knight and Byzantine art.

I like that this art deck named for the 'tsar.' Tsar is another word for the name that we know as Caesar or Kaiser. All the associations that we have with these historical rulers might bring up ideas of glittering parades, gilded churches and for me, Byzantine motifs. In my own memory, I thought of the lovely icon collections from 'the lands of the firebirds' and I saw brushstrokes that remind one of near East or Arabian patterns. I even fancied perhaps the impression of Asian scrollwork or flattened, gilded and lacquer decorations---much like the beauty of the Russian deck of St. Petersburg by U.S. Games., Inc.

I find these influences in this art deck, but more as well. The Golden Tsar looks like medieval and early Renaissance art to me. Something about the color and beauty reminds me of the early Christian mosaics of old Roman ruins or the churches of Ravenna in Italy. My class on Dante studies and a summer 2002 edition of Italy magazine noted how Dante Algheri walked in front of the churches of Ravenna in about 1300. He saw the then 800-year old gilded murals of Justinian and Theodora (It's about twice that age now, some 1600 years old and still as beautiful). He was so taken with their appearance and symbolism to Ravenna, that a whole canto in Paradiso is devoted to Justinian's story. I smiled when I looked at the cards this week. They seemed so much like these historical mosaics and gilded icons.

The art seems to be so much like the art of Byzantium, the art of a faith that 'had a Roman body, a Greek mind, and an oriental, mystical soul,' as Robert Byron described the triple fusion of Byzantine culture. Giordarno Berti in the little white book (LWB) poetically suggests that the art of the Golden Tsar also exalts the faith of the Slavonic people and he (or she) who searches for the authentic nobility in religion.

The majors follow the Marseilles order. The minors are done quite beautifully, with each appropriate number of symbols worked into a lovely design around a scenic insert. The scenic insert follows the Rider-Waite-Smith style of a suggestive motif with a human activity or event. The LWB said the minors could suggest a physical person with a relationship or influence to the questioner.

In my old copy of a "Treasure House of Images," Gareth Knight suggests a picture layout of the Fool card in the middle and the Four Aces laid out around the Fool. I found the strong and beautifully rendered insert in the middle of each Ace card to be a very nice design. For example, the celestial icon of the Ace of Pentacles. Two angels hold a golden plate against a hexagram-shaped window. Small details are not overlooked--the pentacle has the eight dots of delicate blue on the golden plate border over the red-inked icon of a Christian figure. The blue sky in the six-sided window is exactly the same color, with a white contrasting cloudbank at the angels' feet. Two red-winged cupid figures add richness to the scrolled gold etching of the card. Each of the other Aces have similar detail and a distinctively shaped insert that runs from Ace to 10. Pentacles have the six sided insert, Cups have square inserts, Swords have round insert and Wands have a diamond-shape insert.

If you believe the Golden Tsar is too heavily into historical Christianity or reminds you of Christmas cards, I suggest balancing it with another deck. The Russian deck of St. Petersburg has elegant and colorful miniature motifs that add delightful folkart imagery. A whimsical simple deck such as Tarot Nova adds a lighter, bright note. I'm rather eclectic in my own personal weekly writings. I was using the Tarot of Love by Marcia Perry and picking out what gold and silver symbols or simple foil accents seemed to work with the gilded images of Golden Tsar. Here's my walk through the majors

I see many names and talents from people associated with Lo Scarabeo noted in the credits for the Golden Tsar. Many people had hinted that I would enjoy the deck. I am glad to say that I find it a lovely and special gift. My best wishes for your enjoyment of this lovely deck.