The Golden Universal Tarot is a re-printing of the Universal Tarot by Roberto de Angelis, a redrawn and more dynamic version of the Rider-Waite. This edition has selected symbols and imagery decorated with gold foil on its 78 cards. 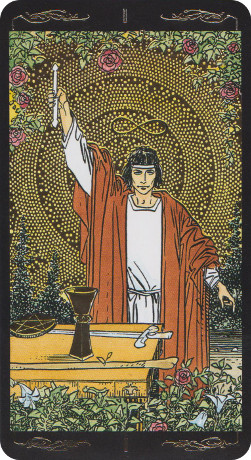 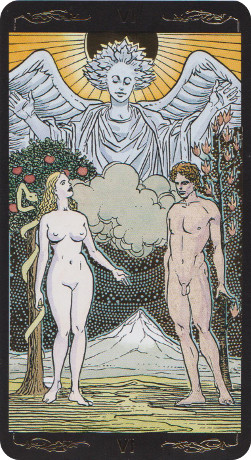 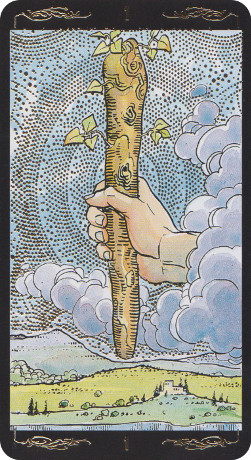 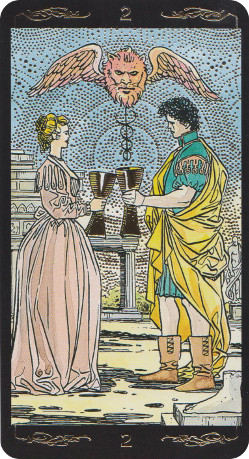 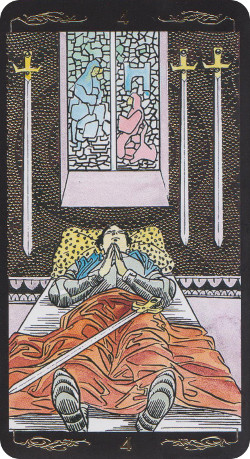 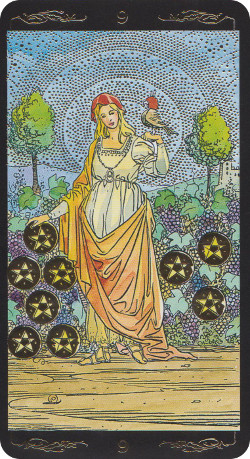 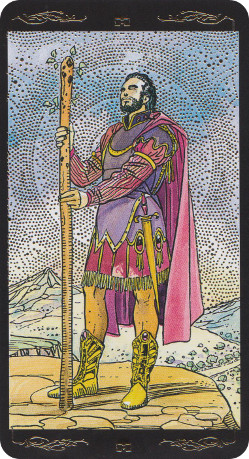 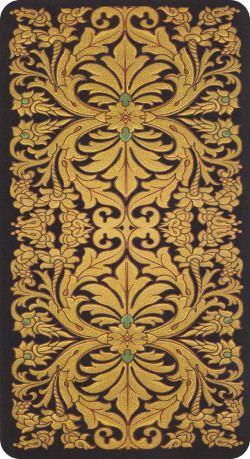 I remember reviewing the original Universal Tarot when it was published a decade ago. It was a new take on the Rider-Waite imagery, pleasingly redrawn by Roberto de Angelis in a more dynamic and less theatrical style and designed to reflect more contemporary thinking.

The Golden Universal Tarot has taken those same images of Roberto's, and improved upon them. Gone are the white borders with distracting multilingual titles, and in their place are black borders with decorative gold curlicues and simple numbering.

What were naturally coloured skies in the backgrounds are now textured in metallic gold, in radial patterns picked out in small dots. Other elements in each card are also highlighted in gold: the cups in the Two of Cups, the pentacles in the Seven of Pentacles, the moon at the feet of the High Priestess and the cross around her neck. The metallic highlights have been given a deliberately imperfect look in places, with intentional scratches and the odd missing piece, so the cards have an aged rather than brand spanking new look.

The 64-page companion booklet is printed in English, Italian, Spanish, French and German and a has a brief chronological history of tarot, an introduction to the concept of the Universal Tarot, a sample nine-card spread and keyword meanings for all 78 cards.

I rather like this new version of the Universal Tarot. It brings a new take on the familiar Rider-Waite and the gold adds visual appeal and shine. It's a very readable tarot deck -- new and improved.

If I had to describe the Golden Universal Tarot in one word it would be magnificent!

Pamela Colman Smith illustrated the original RWS deck, published in 1909. Her illustrations are often described as very bright, soft, almost a mix between pastel and water colors. Since then it has been redrawn by Roberto De Angelis.

Many readers suggest beginners to work with the traditional Rider-Waite Tarot and/or the Thoth Tarot deck. I was never a fan of either deck except for maybe the Universal Tarot Professional. The problem I had with that deck was the size of the cards are too big and has multiple titles in different languages printed on each card as per most Lo Scarabeo decks, which is distracting.

Enter Golden Universal Tarot. The booklet gives a time line history of the Rider-Waite deck and an explanation as to Roberto's inspiration for the illustrations. It is very similar to the Universal Tarot Professional except no names/titles are printed on any of the cards, simply numbers and symbols, traditional tarot card size, and of course, with gold foil.

Why I like this deck out of all the Rider-Waite versions is not just the gold foil on the cards but the color choices of each card. I find the colors seem to literally "pop", almost 3D like. The colors are much different than traditional Rider-Waite deck. For example the 7 of Swords has a man in a blue cloak giving off a much different feeling. Like other reviewers has said, these cards really do need to be seen in person to fully understand what I'm talking about.

I have seen many gold foil type decks, including owning the Golden Botticelli Tarot deck. The gold foil on these cards is a million times better. Even the box itself is gold foiled. The only issue is the pentacles have imperfections where most of the pentacles have chipped off gold foil. Lo Scarabeo claims this was done on purpose. Is this the truth? Who really knows? Is it a big deal? No. The paper stock is a bit on the thin side so I highly suggest gently shuffling this deck and NOT allowing others to shuffle it, otherwise the gold foil may come off.

The little white booklet card meanings are very limited as to be expected from Lo Scarabeo. Having said that, I think this deck is good for all types of readers and experience levels.

Once again, seeing these cards online does not do the deck justice. I give this deck 4 and half out of 5 stars.