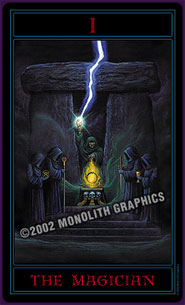 The Gothic Tarot by Joseph Vargo is a slick and elegant 78-card deck conveying a dark gothic mood with images of vampires, gargoyles, ghosts and angels. The actual cards don't have copyright symbols.


Card Images from the Gothic Tarot 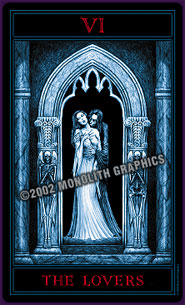 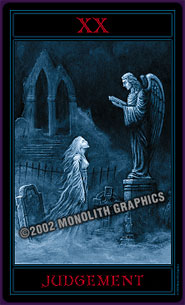 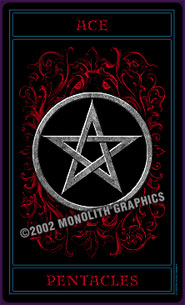 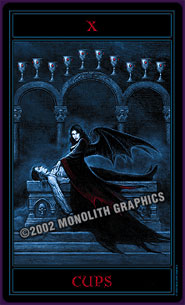 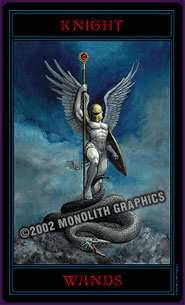 Imagine a world filled with mist, darkness and gloom where light shines through. Elegant, passionate and sensual characters wander through the mist and the darkness of this world, their hearts full of darkness and full of light. Vampires, werewolves, witches, gargoyles, angels, ghosts, are among the characters found on the cards and each of them reveals the cards's meanings in a particular way. The Gothic Tarot is an awesome gothic deck wonderfully drawn by the talented Joseph Vargo.

The Gothic Tarot is published independently by Vargo himself. There is no need to be worried though, the publication is done professionally, the box is nice and the little white book is well done. The deck in itself is of good quality for an independant publication, the cards are a bit thin though; they have a hard smell, that goes away after a few weeks, and unfortunately the scratches stand out because of the black background. The little white book is pretty average for a LWB. Frankly, this deck is so great it would have been neat to have a real small book with it, with Vargo talking about his deck and the cards and his art, similarly to the small book that comes with The Golden Tarot (Kat Black). Many have made that suggestion. (message to Vargo: Please! Please!) I suggest, for those who love this deck, to buy a second copy while the deck is still available.

Thankfully for everyone, as Vargo was working on the majors, and wanting to have unillustrated pips for the minor arcana, he heard about the Rider-Waite Smith Tarot and its fully illustrated pips. This is what gave him the idea to fully illustrate the minors. I'm saying thankfully because, even though the majors are really well done, the prettiest cards are among the minors. I don't think I would have loved this deck as much as I do if the minors would have not been illustrated. The minors follow the RWS's tradition. The titles are regular RWS titles, even though Strength and Justice are switched, as in the Marseille (Justice being VIII and Strength being XI). The back of the cards is not reversible. The deck is larger than average (7.5 cm X 12.6 cm), which allows for the art to come out better, and for this deck, it's just perfect.

Many cards in the deck are based on previous art of works by Joseph Vargo. It seems Vargo had some fun reinventing his art to fit with the meanings of the cards. I don't know if Vargo created some art specifically for this tarot though. Be happy, the collage work doesn't show. So, getting the deck is a cheap way to get most of Vargo's art of works.

While some might think this deck is just an art deck or a curiosity, one of those theme decks, this deck is actually quite workable, deep and intuitive. Even though the atmosphere is dark and gothic, the readings are not necessery dark and negative. I have made many light, good and positive readings with it, contrary to what people might think, and to the surprise of my querents. There's not as much blood in the deck as people think. The effects are usually more atmospheric and left to the imagination than fully showed.

Here's what I wrote for The Lovers (VI) (you can see the image here at Aeclectic):

The back of the card is the same as the Empress and the High Priest. Here are the Lovers, in a door within a vault. The arch has a pillar on each side, and on each side of the arch stands the guardians (representing an initiation), skeletons with wings. A woman, wearing a white nightgown, is embraced tenderly and passionatly from behind by a vampire dressed in black, and gives her a kiss on the neck, before bitting her and making her belong to him, joined in eternity.

Him, dressed in black, and her, in white, makes me think of this act as a loss of innocence, loss of virginity. The others cards before refered to spiritual and material aspect, with this one is emotional, passionate and sexual. Giving yourself totally, your love, your body, your blood and your soul. And this is also a big commitment, for it is for eternity. She still can run away, if she really wants to, I don't think this vampire would take her by force; it is entire up to her to stay or not, she has to surrender to be taken.

The Gothic Tarot is dear to my heart and I'm more than happy to have it in my collection. It fulfills the Romantic (and here I'm talking about the Romantic period in the 19th century), dark and gothic in me. It is also a good deck for people who want to explore their dark side, their shadow. The deck softly whispers to your ears and chats with you, hypnotic, and invites you in... Will you succumb?

Note: I even came up with a spread to go with this deck:

The Dark Realm of Yourself Spread

I wanted to make a dark spread that would fit with the macabre world of the Gothic Tarot by Vargo. Here it is.

1 - Your Dark Soul Card - the card that represents the querent in this dark realm.

2 - Why you are here? - the reason why the querent is in this dark realm.

3 - What have you learned? - so far, in this journey of the soul, what lessons you have learned from this place.

5 - What are you hiding from the others? - the aspects of yourself that you don't show to the others.

6 - What is hidden from you? What are you hiding from yourself? - the aspects of yourself that you're not aware of; usually internal but can be external from the querent.

7 - Your Dark Guardian - everyone has a guardian, and this card is the querent's dark guardian; this card somehow represents inner aspects of the querent, for sometimes the guardians went through similar issues of the querent, so they're there to teach to the querent the lessons they've learned.

9 - How to see, and to get to, the light? - This is the ultimate advice of the reading.