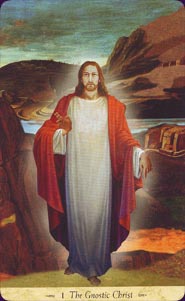 The Grail Tarot: A Templar Vision brings together the search for the Holy Grail, the Knights Templar, and Tarot in 78 cards of Renaissance-style art. John Matthews and Giovanni Caselli have created the book and 78-card deck respectively.


Card Images from the Grail Tarot 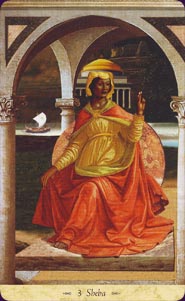 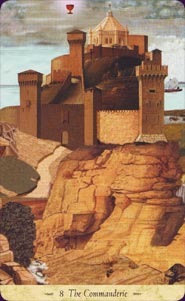 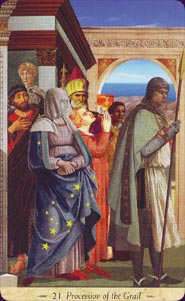 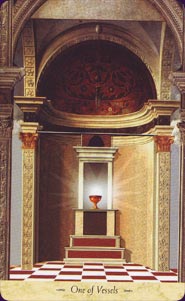 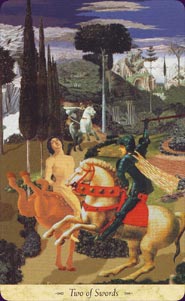 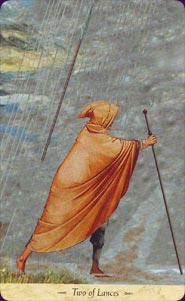 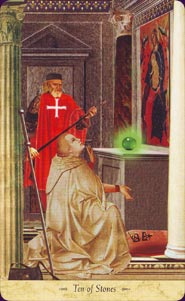 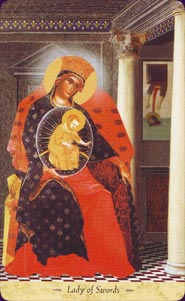 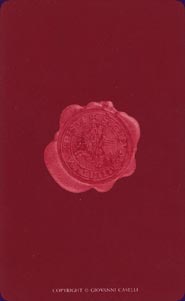 The Grail Tarot: A Templar Vision “retells the Grail legend and relates the quest for the sacred Christian relic to our desire to understand the puzzle of our own lives”. Author John Matthews, who worked on the Arthurian Tarot, has teamed up with artist Giovanni Caselli, perhaps best known for his illustrations in the Rider-Waite redrawing, the Sharman-Caselli Tarot.

The Renaissance-style imagery feels authentic and the majors have an unusual feature – when laid out side-by-side in a row, they form a continuous frieze, an echo of artworks of the Middle Ages, almost like a comic strip of the Tarot journey. The Magdalene (High Priestess) gazes in awe at The Gnostic Christ (Magician), offering him the chalice with her right hand. Sheba and Solomon (Empress and Emperor) sit under a pillared portico. It’s quite cleverly done – it’s not apparent from each individual major that they are part of a joined image, but joined together each background flows seamlessly to the next. This can also be incorporated into readings, by selecting certain cards to arrange into the ‘story’.

The suits are represented by the four ‘Grail Hallows’ of stone, sword, lance and vessel. The Stone is the aspect of the Grail described as a green stone, the Sword of John the Baptist, the Lance of Longinus, and the Vessel is of course the Holy Grail. Together they form a ‘quaternary’ representing different aspects of the Grail, stages of the quest and the four elements. The minor arcana can also be used in the same story-telling way, placed in sequence in each suit.

The feel of these cards reminds me of the decks from Magic Realist Press, though it’s published by Connections and St Martins Press. The cards are borderless and the image fills the whole card, save for a small piece at the bottom with the card number and title. The cardstock is a touch thicker than is usual for a mass-produced, and has a matte feel rather then an overly laminated one. The backs of the cards are simple: a plain burgundy background, and in the centre is a wax seal of the Templars, representing brotherhood and the quest. The base of the back has a small text copyrighting the images to Giovanni Caselli.

The 192-page companion book is one of the nice quality types from Connections or St Martin’s Press. It has very white pages (they tend to stay that way too) and all of the text and images are printed in a brownish sepia tone. The bulk of the book is the card meanings, but the book begins with a six page introduction to the Grail myth and the connection with the Knights Templar. For each of the 78 cards, the companion book shows a sepia image of the card, a description of the image and the historical background of the character or scene. There is a grail question, a few keywords, and the meaning of the card’s message. At the back of the book is a chapter on working with the Grail Tarot, readings and initiations.

With such detailed, rich Renaissance style art and a unique artistic framework, the Grail Tarot has great potential as a story-telling device and for use in interactive reading, as well as for more conventional readings. While the number of Grail decks on the market is getting rather high, this is a quality set that should wear well into the future.

The mystery of the Holy Grail has always been larger than life for me – sometimes seeming more real than my own physical existence. In “The Grail Tarot”, renowned author and authority on Celtic, Arthurian, and shamanistic spirituality John Matthews (the “Hallowquest Tarot”, the “Arthurian Tarot”), and internationally acclaimed artist Giovanni Caselli (the “Sharman-Caselli Tarot”) come together to present the quest for the Holy Grail in Tarot format, with the inclusion of the Knights Templar as an intriguing addition to the story.

The deck and book set are presented in a sturdy box with a lift-off top, and an inset for the cards inside (with the companion book placed on top). The background of the box is black, with text in gold. The front of the box shows the cards as a frieze across the top and the bottom, with informational material on the back of the box.

The 198 page companion book begins with a brief background on the Grail, and its association with the Knights Templar. Matthews also makes note of the ninth century Welsh poem, the “Preiddeu Annwn”, attributed to the bard Taliesin, as the oldest written reference to the Grail. The “Templar Vision” connects the Knights Templar to the Grail. This is the background for the “Grail Tarot”.

The journey through the Major Arcana is seen as the Seeker’s Quest. What in the Tarot is seen as the Fool’s Journey is associated with the Templar novice from Brother to Grand Master, and the spiritual journey of the Seeker in the Grail mysteries. The magic in the “Grail Tarot” is that, set side by side, the 22 cards of the Major Arcana present a frieze where events follow each other in a very natural sequence.

The cards are presented with black and white scans, a description of the card, background on the card, a “Grail Question”, and the card meaning, along with keywords. The “Grail Question” is a one-line question asked by the reader of the archetype represented in each card.

The cards have been retitled as follows:


In the Minor Arcana, the suits and Court Cards have been renamed as follows:


Each card in the Minor Arcana is presented with a black and white scan, a description, background, meaning and keywords.

At the back of the book is a section on reading with the cards, a table showing the “Grail Tarot” titles and the traditional card titles, along with several spreads, including the Grand Master spread (a 22 card Major Arcana spread). Included with the Grand Masters spread is a template listing the 22 Major Arcana cards and the Grail Questions that Matthews developed for them.

The cards themselves are approximately 3” by 4 ľ”, of good quality, glossy card stock. The backs are mesmerizing – a deep burgundy, with a lighter pink imprint of the great Templar seal, which shows two men riding on one horse, representing brotherhood and the quest. The backs are not reversible.

The story of the Seeker from the Major Arcana is continued in the Minor Arcana, from Neophyte, to Knight, to Master, and, finally, to Guardian of the Grail.

One of my favorite cards is the Grail Seeker (The Fool), a red robed figure with his back to the reader, looking out over mountain and valley, with the Grail Cup floating in the sky above him. The Gnostic Christ (The Magician) in a white garment with a red robe, his hands in the “As Above, So Below” position is also striking. The Ship of Solomon, floating along with the symbol of he Holy Grail on its sail, and the novice Grail Seeker on its deck is stunning! In the Commanderie (Justice)we see a massive fortress surrounding a Templar church. In the sky above floats the symbol of the Holy Grail.

I am impressed with the quality of the artwork in this deck, as well as the thought that went into it. It is a deck that carries a contemplative quality to it, making the cards easily accessible for all levels of Tarot students. This is a deck that could be used for readings of all types, for meditation, as well as for journey, ritual, or ceremonial work.

When I opened this boxed set I wasn’t expecting much from it, and I must say I was surprised and, increasingly, delighted by what I found as I thumbed through the deck and started reading the book. The writing team of John and Caitlin Matthews has been a part of my reality for decades, and a few years ago I bought Caitlin’s Da Vinci Enigma deck, and loved that as well. Now it is John’s turn, and while this is a completely different deck, it is no less delightful.

I have been less than favourably impressed by some of Caselli’s other Tarot artwork that I’ve seen recently, but in this deck his style is completely different and has an almost pre-Raphaelite feel to it, with classic lines, clear colours and warm, Mediterranean light throughout.

In the book, John traced some of the mythology and legends surrounding the Knights Templar and the legends of and search for the Holy Grail, and having some awareness of the period from an archaeological as well as a spiritual perspective, I was prepared to be saddened by the perpetuating of certain populist myths and mistakes. And indeed, John did go there and explore those, but then he actually discussed some of the research that has been done, and introduced a measure of factualness to the matter he was dealing with, without losing his sense of the spiritual.

In the actual design of the deck, he tampered with the usual images and names of Tarot cards significantly, as he tied the Major Arcana to a seeker pursuing the history of the Grail and the Templars, and tied each of the suits to the four Hallows (or sacred objects) of the Templars.

I am a traditionalist at heart, and I like my Tarot to be Tarot, dammit, not Some Other System, but this extensive tampering of the system I know and love does not worry me at all. In fact, I find it lucid and intelligent if a bit one-eyed, and I have spent enough time with the deck privately and publicly to know that it works and works well. In particular, I love that in the Major Arcana the backgrounds bleed from one card into the next, resulting in a lengthy single artwork encompassing all twenty-two cards, and I like the gentleness and the hopefulness of the questing spirit that pervades the deck.

Last but not least, I need to deal with the all-pervasive sense of Christianity throughout the deck, manifest in every image. I am not a Christian. And in fact, I am never going to be Christian. Twenty years ago, when I was younger and more energetic, I would have found this aspect of the deck offensive and in-my-face, in fact, but not so today. Now I am less proud, and I appreciate gentleness and kindness wherever I find it, even if it is in a form I don’t personally subscribe to. People who have a beef with Christianity as I might once have done, will not be comfortable with this deck. On the other hand, those who don’t will find it interesting and intriguing as well as visually rich and very appealing.

To me, despite cards featuring the ascended Christ, Mary Magdalen et al, it doesn't feel like an exclusively Christian deck, more a deck using Christian language to express a universal human yearning and seeking. It has quickly developed a place in my working collection as a deck I always have available as an option when I’m reading Tarot in public for those who might be drawn to Christian imagery, and as a deck I would pull out and refer to when engaged in conversation by those who might want to make me believe that tarot is somehow anti-Christian.