The Granny Jones Australian Tarot deck is popular but unfortunately out of print and difficult to find. The cards are non-traditional and cartoony, but sweet and warm. 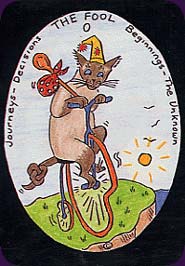 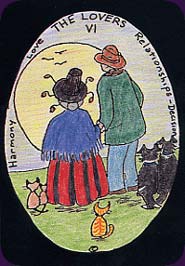 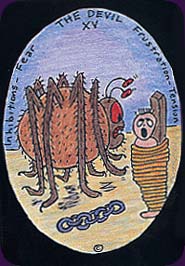 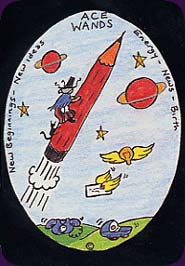 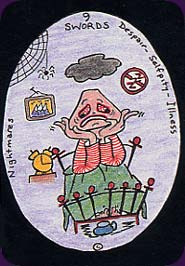 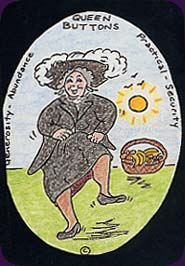 I was delighted when I found out that this site was looking for a review of this deck – I’ve owned it since the year of its publication (in the early to mid-nineties) and it quickly became indispensible to me. In fact, as soon as I found out just how personable it was, I went out and bought a further six card-and-book sets and several more individual decks, completely buying out the entire stock of the place where I got it. Since then, most of the card-book sets and all of the decks have been re-homed, but I’m keeping one card-book set archived in its original seal which turned out to be a wise decision because it has turned out that despite the great charm and effectiveness of this deck, it hasn’t ever been reprinted. My original copy is still in service and still in almost-mint condition despite constant use, and if it wears out in my lifetime I’ll still have that spare to call on.

And of all decks, it is the only one I’ve yet found that comes with its own spirit guide (related to the deck, not to me) on tap when using it. More on that later.

When I first acquired the deck, I was captivated by the apparent naivety and clarity of the cards but a bit put-off by the keywords arranged around the oval window of the cards. They’ve since become invisible to me when I look at them – I simply don’t see them at all, so they no longer bother me with the implication that this deck is designed for beginners.

The charm of the deck begins with its presentation: the back of each card is a mottled grey-black, with Granny Jones’s signature in a white copperplate across the bottom. In the centre is a detail from the High Priestess card: the Priestess herself plus the cat at her feet, minus all the background detail of the actual card set on an azure oval ground. On rectangular cardstock, the front of each card is a scene set in a similar oval: the surrounds are pure black, leading the eye into the card but also giving it a long-ago-and-far-away feel, a mythological feel despite the day to day ordinariness of the subject-matter (I’ll come to that in a minute!).

The accompanying book, I must say, was a disappointment. It’s not that the deck isn’t sophisticated (it most definitely is), but Granny wasn’t ever a verbal person, being much more visual, and she found it much easier to express concepts in illustrated symbols than in words. Hence, there are some things you just have to learn through time by working with the cards: such as the fact that three birds in the sky signifies the protection and presence of the Triple Goddess, that cats symbolise pleasure, that dogs symbolise loyalty, that despite producing a ripper of a Judgement card Granny had no handle on the Justice card at all (well, we all have our weaknesses), and that tea, or teacups, or teapots, or tea being poured, signifies healing being offered and received.

There are a couple of themes that run right through the deck, and I’ve just referred to ordinariness, but this is no ordinary ordinariness that I’m talking about. In keeping with the backs of the cards, a recurring face keeps cropping up in twenty or thirty of the Major and Minor Arcana cards: an elderly, plump, smiling woman with grey hair pulled into a bun under a black Quaker’s hat wearing a black and red striped skirt overlaid with a white apron (White for the Maiden, Red for the Mother, and Black for the Crone), with a purple poncho or shawl completely hiding her upper body to signify her physical connection to (or shelter by) her spirituality. Her Quaker’s hat has hanging from its brim the “bobbing corks” usually pictured on a stereotypical Aussie akubra hat, something that although I’ve lived in Australia all my life I’ve never seen except in caricatures.

So her Australianness is clearly stated, as well as her spirituality and her connectedness with the Triple Goddess (also, more on that later!). For those who have eyes to see and a bit of local knowledge, it is easier to further identify her as a Proud Tasweigan (to rhyme with Norweigan, an occupant of Tasmania): in cards such as the Four Cups and the Star, the bridge and church of a Tasmanian town called Richmond is clearly recognisable, though in the cards the church has no cross on its steeple.

As I worked with the deck through time, it became clear that the recurring figure was Granny Jones herself. Before I realised this, I had questioned to myself why some notable figures (like the High Priestess, the Star and the Lovers) were the same woman, and other notable ones such as the Queen Cups and the Empress were totally different when it would make sense to use the Goddess-figure for important women like those two, also. After a while I suspected that, given the nature of the back of the cards, this recurring figure probably was Granny herself; this was confirmed to me a few years later when I was reading in a New Age shop in Gosford, NSW late last century: a young man came in just as I was packing up and this deck was already deep in my bag, apologising for disturbing me and telling me that he’d tried to walk past twice, but each time he’d been called back by the spirit of an older woman who wanted to talk to me through him as I seemed to be too busy to listen!

So I put aside a few minutes and sat down with him. First I asked who she was. He looked away briefly, and said that she said she was the maker of one of my decks (he seemed to be surprised that anyone would have more than one) and a sort of general friend and guide in terms of divination, and that she was watching over me while I worked, and was impressed by my understanding of her images. I asked him to describe her, knowing he had not seen the images on the deck, and he described her as wearing a purple top and a red and black striped skirt, with grey hair pulled back in a bun under a “funny” hat. Bingo. He introduced us, and she has been behind me, immediately contactable, every time I’ve sat down with clients ever since, and in recent years has become very much clearer: I believe she might have passed on at that stage, and didn’t have her attention distracted by having to run a physical life. And I believe she is equally available to anyone who clicks with her deck and spends any amount of time with it – I’m nobody special. Many readers have guides that help them, but this is the first time I’ve heard of a deck that has its own guide for anyone who cares to tune in.

But back to the deck. The biggest change she has made to “tradition” is renaming Pentacles (or Earth) “Buttons”. I thought this was a bit weird at first, but then I reconsidered. After all, Pentacles is the suit of Earth, and materialism, and earthy people. And how many earthy people carry around with them a large gold disc inscribed with a five-pointed star? Right. None. But *all* of us have buttons of one kind or another: on our jeans or jackets or shirts or coats, fallen off our clothes into the backs of our sofas, under the furniture, sewn into the hemline as spares, or in jars on the sewing bench. Some of those buttons are sewn on, some are press-studs, some of them are riveted. All those varieties are represented somewhere in the deck.

The artwork is simple and in a naďve style: black-ink line-drawings coloured, I think, with oil pastels or crayons. It seems childlike in its execution but it is carefully planned: you can see that at once in the Five Cups, there the pencil guide-lines that she laid down originally while planning the image are clearly seen with some of the ink lines where she forgot to take an eraser to them later.

Just as we have Granny in many guises reappearing in the deck we have a few other recurrent characters: her husband (according to the book) in the Emperor, and it doesn’t take a genius to recognise the same man in the Lovers, even though he and Granny have their backs to the audience. The Queens Cups and Buttons, I strongly suspect, are Granny’s best friend: a woman of about the same age, grey, very fat, bespectacled, and with an idiosyncratic face. The Queens Swords and Wands, likewise, are another single woman, a generation younger (thirties or forties), with longish red hair. As the Queen Swords she is Boudicca in a chariot, as Queen Wands she is much more domestic, with a lion-painting behind her, a dog in her arms, a broad smile and a paintbrush in one hand. The Empress is very probably another personal friend of Granny’s: of her generation but harder, more unrelenting, having survived parenthood and extended into grandparenthood, she is the Mother of Fertility itself, rather than its uncomprehending vessels like a lot of the know-nothing pregnant teens represented in what should be a power role in other decks.

In readings for strangers, this deck manages to be both non-threatening because of the nature of the artwork and the homeliness of the symbolism, and deeply incisive because Granny Jones, one feels, was not the kind of woman to tolerate any nonsense or to dilute a message or to avoid spirituality for fear of seeming odd. In fact, everywhere her oddness in daily life is apparent: facing directly into The Sun as she hangs out her washing to dry, getting around Richmond not in a little car like other elderly women but on a giant three-wheeled bicycle with shopping baskets in front of and behind her (the Chariot) and so forth.

Siamese cats, collie dogs, Scottish Terriers and other cats haunt the deck, and one gets the sense that with the exception of the ginger cat in The Lovers (standing back from the paired humans, Siamese cats and Scottie dogs, watching them all cynically), they were all portraits of real companions, so their house must have been full (and at times, smelly). That particular ginger cat only occurs the once, in the Lovers, and is the only figure in the card not paired off, so it pretty obviously is a spirit-cat, an invented cat to represent watching forces.

When I read publicly, I have a habit of laying out a number of decks, face-up, with the same Major Arcana card visible on the table, so the querents can choose the deck I work with based on their artistic tastes, not influenced by the differing energies of different individual cards. I feel that this way, they will pick whatever artwork draws them and will get a deck in tune with their needs of the moment. And I see trends. Historically minded educated people draw the Hudes or Scapini Mediaeval. People with deep and raw emotional wounds invariably head for Dorothy Morrison’s Whimsical deck. Shopaholics draw the Oracle Deck. Herbally inclined people pick the Herbal Deck. But people struggling with the here-and-now, with husbands, children, parents, illnesses, jobs and housework, choose Granny. And Granny will give them both practical real-world suggestions on how to cope with whatever is going on, plus an underlying spiritual reason why it is happening, and suggestions about what they can do on deeper levels for themselves.

You simply can’t ask for better Tarot performance than that.