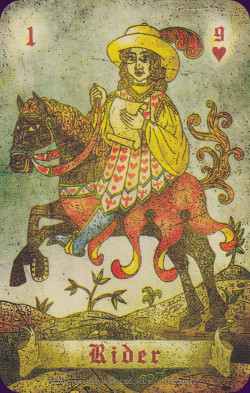 The Gravenchase Lenormand is has 51 cards inspired by medieval woodcuts and engravings, illuminated manuscripts and the Age of Exploration. It's from the very talented Lynyrd-Jim Narciso, and combines 39 Lenormand cards and a 12 card Zodiac Oracle.


Card Images from the Gravenchase Lenormand 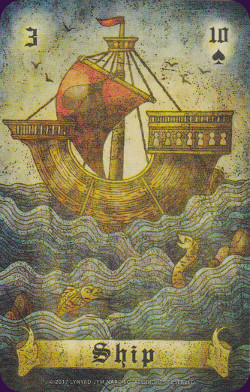 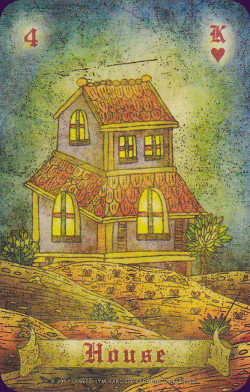 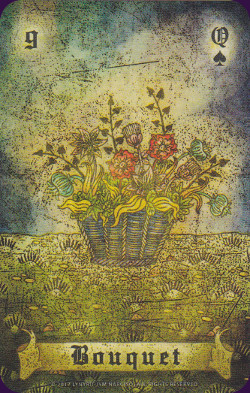 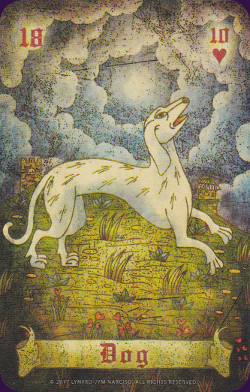 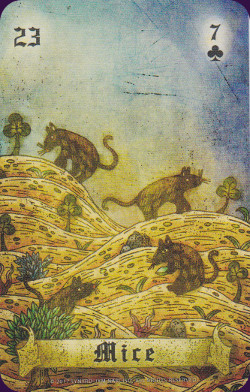 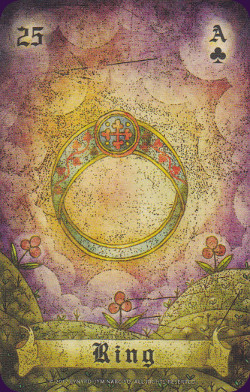 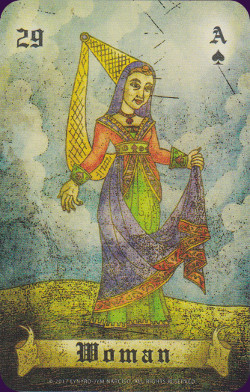 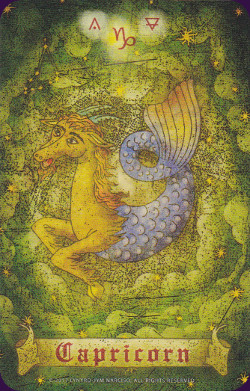 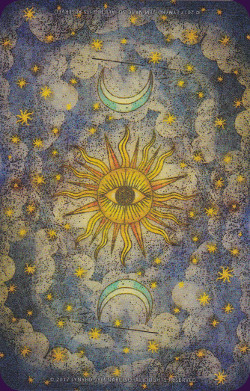 For decades (centuries, even) interest in tarot has been on the rise, while Lenormand decks have been languishing as a sort of lost branch of the family. In the last 20 or so years new avenues of divination have been discovered, recovered, and Lenormand and Kipper cards are starting to shine as viable alternatives to tarot and oracle decks. Lenormand cards in particular are often promoted to the unsuspecting as an uncomplicated oracle with inflexible definitions, the reading of which is relatively easy to master. There is an erroneous belief that the cards have universal meanings which have not changed since the system was originally developed somewhere in the early to mid 1800s. While the actual meanings of Lenormand cards are relatively static, more and more possibilities are being added in parallel with our complex modern lives. And, given that Lenormand cards in particular are read in pairs and groups, interpretations of them is often idiosyncratic and heavily dependent on the reader’s skill.

In line with the modernisation of Lenormand card meanings are the addition of new cards to the deck – the original deck had 36 cards, some modern decks have as many as 42. This allows for interpretations that would never have seen the light of day in their original settings. Most common additional cards include an extra Man and Woman card which can account for same-sex relationships and three-cornered relationships. Other additions include gender specific Child cards, and a Cat card to balance out the Dog card. Artwork too, has been modernised with varying degrees of success and attractiveness. Into this milieu steps Lynyrd-Jym Narciso with his gorgeously illustrated Gravenchase Lenormand.

The name Gravenchase is something of a portmanteau term referring to 2 illustrative techniques – engraving and chasing. However, the deck takes its inspiration from mediaeval woodcuts and illuminated manuscripts from the 14th and 15th century, as well as artwork from the Age of Exploration – approximately 15th to early 17th century. The Gravenchase artwork is intentionally rustic and olde worlde with simple lines and stylised subject matter. Typical of the time period, the images are presented as a form of tableau, the subject frozen rather than in dynamic motion. The illustrations of this deck offer no empty or negative space (which some users may find a little busy), and have tiny specks and flecks like the patina of an old mirror. The colours are vibrant, translucent inks and watercolour, reminiscent of the rich palette utilised in Le Tres Riches Heures du Duc du Berry. The Gravenchase illustrations are clear and unambiguous, and for the reader, decipherable at a glance.

This is a 39 card Lenormand deck, and comes with a bonus 12 zodiac cards which can be used in concert with the Gravenchase deck, or as a separate deck in their own right. In addition to the standard 36 Lenormand cards, there is an extra Man, Woman, and Child card. The cards measure 57 x 90 mm, which makes them standard bridge sized cards, a little smaller than the average playing card. The card stock is excellent being both light and sturdy, flexible without being flimsy, and featuring a low sheen, linen finish. The cards are extremely easy to handle, shuffling well without sticking together or clumping.

The print quality is superb, being clear and crisp, with clean lines and subtle, glowing colours. The artist's palette is broad, however some colours do dominate the deck – delicate sky blues, rich purples, faded yellows and strong golds, watery indigo, vibrant red, and antique green. There are no borders to these images. Titles are given on a scroll at the base of the illustrations, and playing card inserts and Lenormand numerical designations are given in an old Germanic font which maintains the atmosphere. The image on the back of the cards features blue, cloudy skies illuminated with golden stars, a pair of crescent moons flanking a bright sun with an all-seeing eye in its centre.

The Zodiac Oracle is rendered in the same art style and colour combinations as the Gravenchase Lenormand, and can be seamlessly incorporated into any Lenormand reading.

The Gravenchase Lenormand does not come with an instruction booklet, but rather recommends several excellent books – all of which will assist a novice user to become familiar, if not adept at using the cards. Likewise, the Zodiac Oracle has no instructions, but also references excellent sources of information on astrology.

The cards come packaged in a solid plastic box with a hinged lid. The box is small, slim, and light, and easy to slip into a bag, backpack, or even back pocket with-out the cards being damaged. Hands down, this is one of the best card boxes on the market, offering complete protection for a deck that is worth treasuring.

Currently there are a lot of Lenormand decks on the market, their relatively uncomplicated imagery makes it easy for do-it-your-selfers to compile a deck using open-domain imagery on the Internet. Not all decks are created equal, and many of these DIY decks seem somewhat compromised or slapdash. Not so with the Gravenchase Lenormand. Lynyrd-Jym Narciso has illustrated a deck of consistently high quality, its beautiful illustrations are matched by its user friendliness, and exceptional responsiveness.

No matter if you are a novice or an old hand at reading Lenormand cards the Gravenchase Lenormand is a deck you will want to own. Highly recommended.