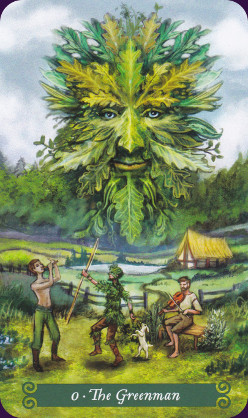 The Green Witch Tarot is a beautiful 78-card deck based on nature-based Paganism. It has thoughtful, warm-hearted and borderless cards that have been re-interpreted around green witchcraft, but are still easily readable. The cards come with a detailed 240-page companion guidebook. 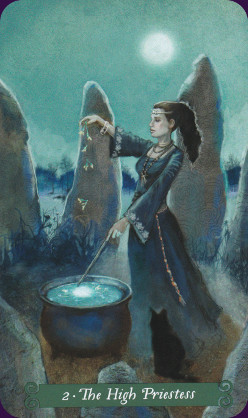 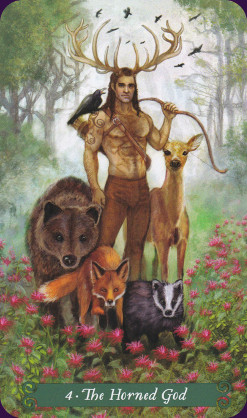 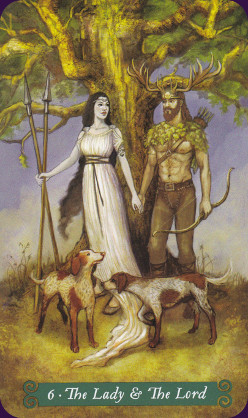 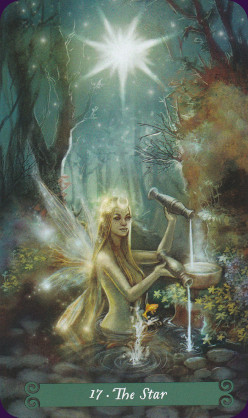 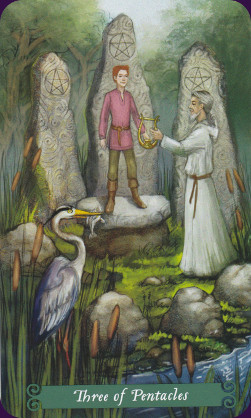 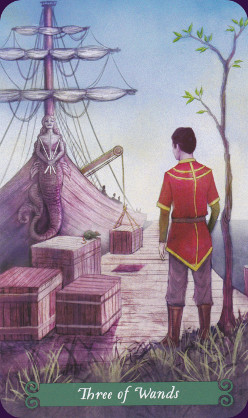 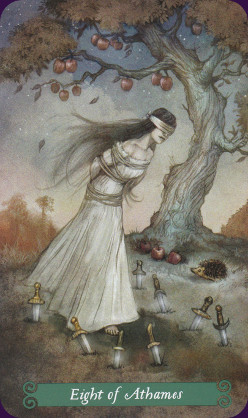 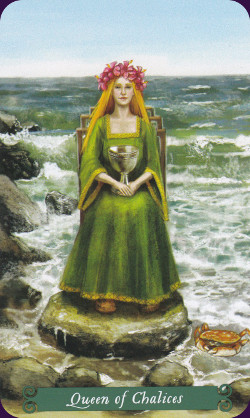 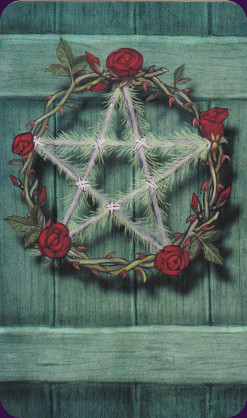 Green witchcraft is a branch of paganism that has its bare feet planted solidly on the Earth. It incorporates aspects of northern European folk lore, Celtic mythology, folk magic, herbalism, earth energies, The Wheel of the Year, and Pagan belief.

As a current trend there are quite a few Wiccan and witchcraft tarot decks on the market; each one is attractive and sincere in it’s own right, but none is as mindful, thorough, complete and beautiful as Ann Moura’s Green Witch Tarot. A vast amount of thought and knowledge has gone into creating this deck and artist Kiri Ostergaard Leonard has parlayed this into gorgeous and detailed images.

This is a 78 card fully illustrated deck – 22 Major Arcana and 56 Minor Arcana. The Major Arcana have been retitled to reflect Green Witchcraft beliefs, however the fundamental traditional meanings of the cards have not been sacrificed. The Major Arcana titles are as follows: The Greenman, The Witch, The High Priestess, The Earth Mother, The Horned God, The High Priest, The Lady and the Lord, The Battle Wagon, The Crone, The Holly King, The Wheel of the Year, The Standing Stone, The Oak King, The Lord of Shadows, The Sidhe, Nature, The Wild Hunt, The Star, The Moon, The Sun, Harvest, and The World Tree.

The Minor suits are Pentacles, Athames, Wands, and Chalices, while the Courts are Page, Knight, Queen, and King.

The card stock is excellent – thin and light without being flimsy. The cards are flexible and smooth, with a low sheen finish. This deck is easy to shuffle,the cards do not stick together or clump, nor are they too 'fast 'and slippery. The print quality is of a very high standard – clean and crisp, preserving the incredible detail and subtle colouring of the artist’s work. The artist's palette is largely rich, earthy colours – deep greens, strong browns, evening blues, vibrant reds and yellows which reflect the bounty of the natural world.

The images are somewhat whimsical, but not overly quaint and sentimental. The scenes depicted throughout the deck take place in an idealised world where magical doings and beings are both sacred and commonplace. All events are shown occurring in a pseudo-mediaeval world which allows both the artist and viewer some leeway with questionable historical details and factual inaccuracies.

The images run to the edge of the cards with no borders at all. Card titles and numbers are all contained on a small green banner at the centre-bottom of each image. The image on the back of the card – a pentacle on a wreath of roses with a green wooden background, is not reversible.

The cards and guidebook come packaged in a large cardboard box. It is printed with information about the Green Witch Tarot, as well as images from the deck. While this box is suitable for storing the cards at home, it is too flimsy and too large to put into a bag or backpack without sustaining serious damage.

The guidebook is the 240 page Green Witch Tarot Companion by Ann Moura. The Introduction familiarises the reader with the basic tenets of Green Witchcraft. This is followed by a Brief History of Tarot, a fairly simple outline of the development of the tarot from use by 11th century gypsies migrating from India, through to it's expansion by the Golden Dawn in the early 20th century. A subchapter on Green Witchcraft In The Tarot details some of the primary symbols and their meanings, as well as alignments and correspondences used in this deck. There is information on Reading the Tarot, Consecrating Your Deck, Grounding and Centring for the tarot reader, as well as Beginning, and Doing A Reading. And finally a few other uses for this tarot deck - primarily meditation and spell casting,.

There is a black and white reproduction of each card. There is a lengthy description of the image – its meaning, historical and social (mythological and folk-loric) context, an explanation of the symbols employed, and scattered throughout all this, the divinatory meaning of the card. A concise divinatory meaning for both upright and reversed card is included, as well as Prompt Words. Each Major Arcana card also has a lined page for notes by the reader.

If you consider yourself to be a Green Witch, Natural Witch, or Traditional Witch you will undoubtedly find this deck appealing. If you are interested in a more earth-based branch of paganism, or would like to use a tarot deck with strong elements of Celtic mythology, earth energies, or folk lore then this is a wonderful deck for you. While I would not recommend this tarot for complete beginner, those with a little experience could use this deck with ease. It is very user-friendly, goodhearted, detailed, and profound. A lot of thought and knowledge has gone into the creation of the Green Witch Tarot and the end result is a triumph of style and substance. One of the most outstanding tarot releases of 2015.