The Green World Oracle is a 33 card set focused around trees and plants, and the legends, folklore, nature spirits and deities linked with them. Each card features a scene illustrating the energy of the tree. 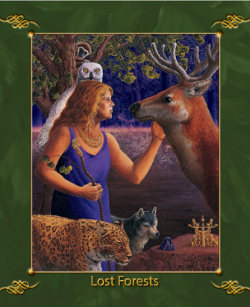 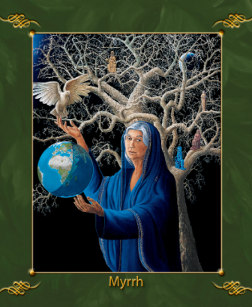 Dedication: For Earth’s trees and plants, and the humans who seek their wisdom.

The “Green World Oracle” is a 33 card oracle deck that comes with a 256 page companion book. Both are housed in a lift top hard cardboard box with the trademark Schiffer magnetic closure and ribbon pull tab. The theme of the deck is that of honoring trees as ancient oracles … bearers of wisdom, in an intimate and sacred relationship with spirit. Each tree in this oracle reflects its own wisdom, and has its own stories to share. One such story that Jenks tells in her introduction is that of a friend’s husband that walked up to a tree, hugged it, and vanished. His explanation was that he had not vanished, he had merged with the tree in its own time frame. I love living in a world where this can happen!

“This oracle, then, sees itself as having the power to guide, to catalyze joy, to restrain rage, to transform grief. Even if everything else fails, it sees itself fostering that indescribable “almond-bone”, or kernel of hope, around which new life may be constellated.”

The cover for the companion book shows dark green leaves, with the name of the deck in gold lettering. In her section on how to use the oracle, Jenks states that the oracle works through the use of symbols, archetypes, and metaphors, as they are useful keys to accessing the regions of the heart and mind where transformation occurs. She also notes that myths and stories are to be found in abundance in this oracle, as they provide many more “gates’ (gateways) through which insights may be found. Another interesting observation that Jenks makes is that layouts with many cards may not work well with this deck, as it takes time to absorb the information and intuitively interpret it. She also suggests not to force a meaning where you do not feel one.

Spreads presented include a One Card – Higher Self’s Message, a One Card Question, and a Four Card Karmic “Primal Seed” layout. Also included is “Ritual of the Sacred Grove”, a reading template for groups.

Each card is presented with a black and white image, quotes, what the tree represents in the mythic world, a section on botany and history, and both upright and reversed interpretations for the card in a reading, along with artists notes and end notes.

In her conclusion, Jenks shares a story about one of her students, and how she reads the cards. To begin htge reading, her student shuffles the cards until she feels they are ready to be read. Then she takes the top card, and interprets it as representing the person that she is reading for. After she has described the card, and she and the person she is reading for have discussed it, she puts it back in the middle of the deck and reshuffles. In this manner the card that represents the individual being read for is in effect “introducing” them to the rest of the cards in their reading.

The technique used in painting the cards is well worth mentioning. It is called he Venetian technique, and consists of an underpainting, with layers of varnish and pigment (glaze) built up over it. The layers of oil glaze are transparent, allowing light to reflect off the underpainting beneath. This gives an incredible quality and intensity to the cards … a very “other worldly” feeling.

This is an incredible deck, and a worthwhile addition to any deck collection!