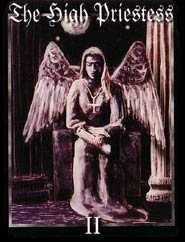 The Guardian Tarot is a angel-themed, gothic deck based on Rider-Waite symbolism. Independently published.


Card Images from the Guardian Tarot 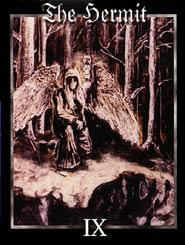 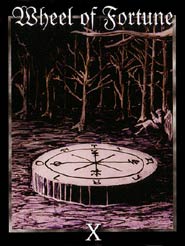 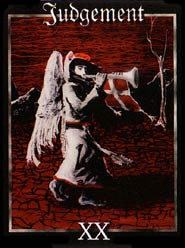 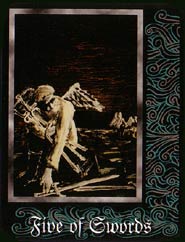 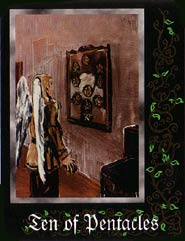 Guardian Tarot is an innovative self-published deck from creator Jeff Minkevic. Jeff is a Canadian artist who painted all 78 paintings as an art school graduation project. According to an Aeclectic Tarot Forum posting, he says:

Each one was done 32"x40" on foamcore using acrylic paint, with no visual references whatsoever...just completely out of my head, something I have always struggled with. The symbolism is drawn from classic Waite, but leans towards interpretation on occasion 1400 hours worth of painting, 1200 hours of pre-production (scanning, Photoshop, retouching and color correction) and hundreds of hours I haven't counted manually trimming the corners, sorting cards, and putting everything together.

This is not a deck you are going to like (unless you like decks really dark), but you should buy it anyway. This deck has a lot important to say to you, so read past the flaws I outline below.

Guardian Tarot gives a poor initial impression -- the cards are on really flimsy stock and the included tarot bag (a good idea in theory) is of such cheesy fake leather that it would be insulting to put a Tarot deck in it. From a packaging point of view, I see why this is being liquidated on eBay. On the other hand, at the current going rate of around $10 US on eBay, its hard to go wrong.

Furthermore, all the cards are set in a hellscape of misery and oppression which no one with a depressive disorder should look at. The artwork is of variable quality -- some really well done paintings mixed in with stuff that shows either immature talent or a need for speed.

The minor arcana all have illustrations down the side of the cards. While the designs, such as a vine for Pentacles, help you see what suite the cards are from (since there is little actual green growth on the Pentacles or colorful water on the Cups) this results in an unfortunately small primary picture on each card.

The backs show a pentacle in the center of the card, surrounded by a staff, pentacle, sword, and cup in each corner. The design is not reversible.

But -- first looks are deceiving -- and frankly I'm risking being a jerk treating Jeff Minkevic's work this way. I am delighted that a brand new Tarot artist with a new and unique viewpoint has not only painted 78 Tarot cards for us, but has managed to self-publish with all the work that entails. Who cares if the packaging and execution is a bit off?

In existential counseling, its considered essential that clients (and all human beings) come to terms with Death, Freedom, Isolation, and Meaninglessness. These are the deep roots from which most human problems spring and coming to terms is key to lifes progression. I have not finished coming to terms with these -- and that's partially why this deck so disturbs me. I don't think the artist has finished coming to terms either -- perhaps that's why the deck is so stark. This is the darkest deck I have ever worked with. Or -- maybe its dark because the artist wants to force us to confront our anxieties?

I have put this deck down "disappointed" with it 4 times now -- only to find myself picking it up again, and then feeling motivated to write a review! There's something going on here that needs confrontation, and I think its those universal roots of human existence that this deck forces us to ponder.

The landscape of this deck is very hellish -- chaotic red and orange skies (except in the black & white Cups suite which is usually devoid of emotion). No one is happy. Everyone in alone. Cards showing the pinnacles of achievement betray meaninglessness to the completion of the work.

Here are my impressions of some of the cards:

The Magician -- He holds the wrong (left) hand up to the sky. His other hand does not point to the ground or the pentacle. Usually Magicians connect the powers of sky and earth. Here, in this entire deck, the earth is alone, isolated, and hellish. Perhaps there's a better place in the sky somewhere, but there's no connection to where we are. He instead touches the sword with his right hand. Swords are, I think, more about violence and action in this deck (than knowledge). There are lots of silly people doing active things in this deck but none of it really improves our world.

The Devil -- The most comforting, compassionate, hopeful card in the deck. And that's a problem. Lucifer ("light-bearer") is bearing a torch and offering a comforting way. Don't be deceived -- there is no hope in this world.

The Star -- I hate this card. And yet its really well done. The Star is about hope. Here, hope is empty. The hope figure has no face. It desperately scoops blackness from the pond (rather than pouring hope into the pond from heaven). Its trying to take hope from where none exists and the star shines remote and cold in the sky.

7 of Cups -- Compare this card with the Star. This figure is also totally black. The illusions of this world have no substance or hope.

Death -- A figure cries in front of a tree stump. (I guess all those leafless trees in the background of multiple cards are actually alive by comparison to the stump.) The human figure has two red blood marks on his back. Look carefully, the stump has the same two red blood marks. Is the tree's death upsetting because it forces him to confront his own pending death? Are the stump and the figure actually One because the world is an illusion of our own making? From the stump rises the only green healthy plant sprout in the entire deck! Is that the tradition Death card message that the cycle of life always begins anew? Or is it a message that we are better off dead and out of this horrible world?

The Chariot -- The carriage has no driver! The traditional message of this card that could be determined from this is to step up and take the reins -- take control. The existential message is that the effort is all meaningless anyway.

The World -- This is the card that sums up the entire deck. She is dancing alone and kind of sad in the desolation. This is a really well executed card.

7 of Staves -- This is one of several cards that do a better job than the average tarot deck of bringing out what the card really means. 7 of Staves is often about being on defense -- and rather desperate defense at that. In Guardian Tarot, the defender's fear, anxiety, and anger really show.

6 Cups, Lovers, 2 Cups, 5 Pentacles -- Compare all these cards. The Lovers are not quite touching and their trees are not reaching for each other. She has a snake in her tree. I don't think this deck has a very positive outlook on love relationships... The Two of Cups shows two glasses toasting, but not the faces of the people -- its meaningless contact at best. The 6 of Cups actually shows real human contact (one of few cards to do so). In the Six of Cups the trees bend towards each other like they usually do in the Lovers card. The female has a very nasty look on her face -- something is going very wrong with this "innocent" relationship. I'm including the 5 of Pentacles with this group of cards because the people actually seem to be getting comfort from each other -- a rare thing in this deck.

9 & 10 of Cups -- The 9 of Cups is usually about happy plenty -- perhaps excess. Here we have a guy who has plenty but is drinking sad and alone. The 10 of Cups in many decks is about ultimate happiness and fulfillment -- and I think that is what is meant here (rather than being the "happy family" card). This 10 Cups shows the man walking away from the world with the cups forming a rainbow in the sky. The message may be that happiness lies beyond this sad world -- sort of like the green spout arising from the stump in the Death card.

10 Pentacles -- My favorite card in the deck. I have not given enough ink to the fact that Jeff has come up with several innovative ways to paint meanings in this deck -- both traditional meanings and his own unique takes. This card shows a figure looking at a painting of completion. The 10 Pentacles is a card of stability and material well-being. Several deck artists also add in some emotional happiness to make 10 Pentacles the "happy family" card (instead of 10 Cups). Here the work of Pentacles has been completed. But its static. Its meaningless to the observing figure. It does not make him happy. Its a painting and an illusion.

8 Swords -- Usually there is a path from the circle of swords if only the figure would work to find her way out. Here, in this card, there is no path out.

I find myself spending a lot of time with this deck, and it seems to read well for me. I did an initial three-card spread while asking the deck what can this deck teach me? The cards that came up were 10 Cups, Moon, and the Wheel. Hmmm issues of happiness in life, and illusions thereof. Adrift on the wheel of life trying to make sense of it Sounds about right to me.

If you have clients that need to confront their existential issues, and have the stomach for it, then you could use this deck to read for them. Be careful however. It's usually considered a moral requirement for Tarot readers to give their clients some hope -- some way to work on improving negative readings. You might be hard-pressed to give your client productive improvement advice with this stark deck. Perhaps its more a self-study tool.

Okay -- There's lots to hate in this deck. But also lots to respect. If you believe that confronting your anxieties and fears leads to personal growth, then you need this Tarot deck.