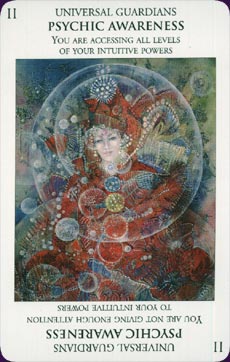 The Guardians of Wisdom Tarot is a simplified 78-card tarot deck which places as much importance on reversed meanings as on upright. The keywords and a short explanation are printed on both ends of the cards.


Card Images from the Guardians of Wisdom Tarot 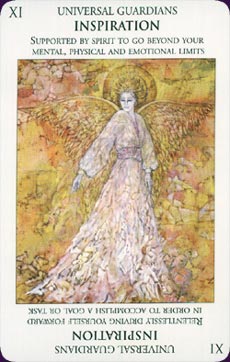 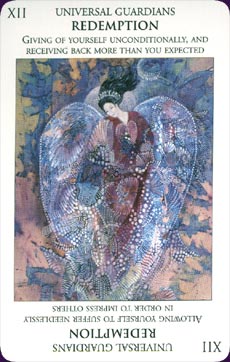 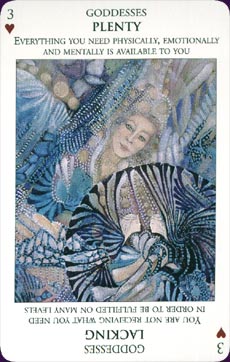 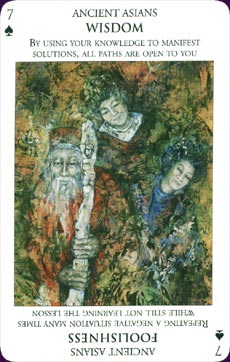 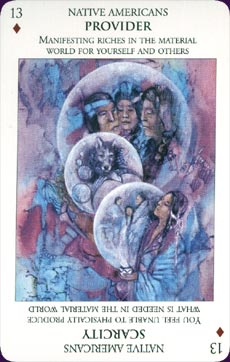 Created and published by Todd Hershey and Emy Ledbetter, the Guardians of Wisdom: Universal Power Cards are described on the back of the box as 'easy to read, understand and use'.

And this is not marketing guff, either. Tarot knowledge is not a requirement for use of this deck. The simplicity of the system is such that the deck does not even come packaged with a little white booklet. (Several double-sided, printed cards are, however, included with background information on the use of the cards; the 'categories' or suits; three sample spreads and the creator's biographies.)

Each card has an original visionary painting set into a white border. While somewhat overshadowed by the prominent titles, the art is muted, mystical, and spiritual. Reversed, the fluid artwork is not jarringly and instantly recognised as upside down, but shown in a new and different perspective. This is a deck of 78 cards but 156 distinct interpretations, as reversals are an integral part of the Guardians of Wisdom, and are given as much importance as the upright orientation.

A pared down meaning, whether upright or reversed, is instantly accessible on the face of the card. On the majors, the keyword is the same at each end and only the short explanation differs, but in the minor arcana both keywords and meanings are opposite. For example, the card equivalent to the World is titled Inspirition and when upright says, "Supported by spirit to go beyond your mental, physical and emotional limits." Reversed, it is: "Relentlessly driving yourself forward in order to accomplish a goal or task." Whereas the Six of Diamonds (Native Americans), when upright is titled "Successful. You create a life doing what you love to do." Reversed, it is "Imposter. You are creating a life based on other peoples' expectations."

The symbols of the four minor arcana suits are clubs, hearts, diamonds and spades, and each card is number according to position, including the court cards. There are no Pages, Knights, Queens or Kings, they are simply 11, 12, 13, and 14 of the suit.

While not titled as a tarot deck (indeed, the creator avoids almost all mention of the word) these cards have been designed to be beginner-friendly but also to allow experienced tarot readers to use their existing knowledge to expand the scope of the deck. Overall, I think the Guardians of Wisdom deck most useful for the beginner or casual tarot reader who does not want to learn the historical or symbolic background of tarot cards.