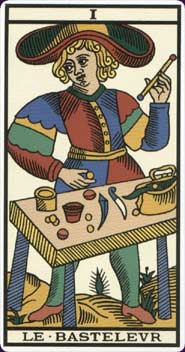 Le Veritable Tarot de Marseille ('The True Tarot of Marseilles') is a lovely Marseilles variation with subdued colouration, restored and reconstructed by French Tarotist, Kris Hadar. Close attention has been paid to the finer details of the cards. Published by Mortagne. 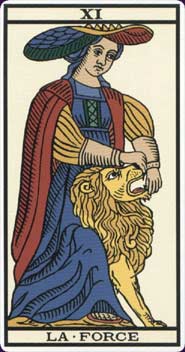 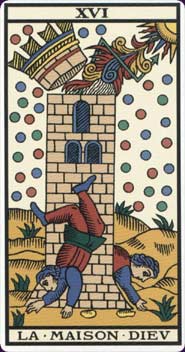 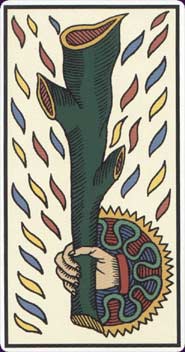 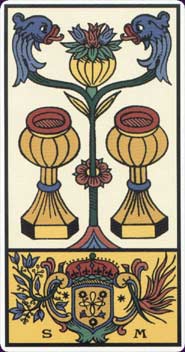 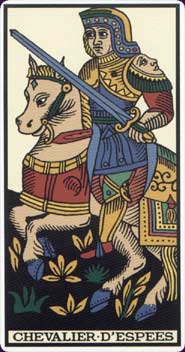 Having written a review for the Camoin Tarot of Marseilles about a year ago, I now - today! - also have the also recently re-designed Marseille deck by Kris Hadar - again a truly marvellous Marseille rendition, and unlike, for example, the Convos which just lacks so many of the generic deck's finer qualities!

For Kris Hadar, 'the Tarot is a Cathedral wherein each may in prayer discover within one's existential labyrinth the path to one's salvation!' (p18 LWB, my translation). When one truly believes this, then surely depth of care will weave itself into the deck's re-design.

In order to avoid repeating some of the general comments I make in relation to the Marseille, may I suggest that you first read that earlier Camoin deck review.

The Hadar deck, according to its printed date, came out in 1996, two years before the Camoin.

What Hadar appears to have done is carefully consider various representations and made careful judgements about whether a detail ought to be included or not. For most cards, I do think the choices made are inspired. If one compares, for example, the hem of Temperance, Hadar has maintained the careful ambiguity of a possible snake-like depiction, without thereby destroying such ambiguity as has occurred in the Camoin. At other times, however, I do not think he was careful enough with the details, and went with the more common depiction. Again, and for example, the triple nipple upon one of the figures on XV the Devil card, also found, for example, upon the 1760 Conver, has not been incorporated - though possibly purposefully. Another detail which many early decks include ambiguously is the hind-legs of the horses on VII the Chariot. Both the Camoin and the Hadar remove the ambiguity - Hadar doing the opposite of Camoin and following the Marteau rendition by deleting the ambiguous lines altogether. A last example: the platform's ambiguous outline upon XVII the Star has been retained unlike, again, the Camoin.

Like the box which contains it, there is an overall flavour of Blu-ishness to the deck. This however, is more of a tonal quality, for the colouration and figures are quite beautified when compared to the woodcuts from which the earliest Marseille decks originate.

If the Major Arcana are wonderfully re-presented, an even higher praise can be said for the Courts. Here, Hadar has really presented an un-surpassed rendition of a Marseille. Unlike the Camoin which, to my mind, falls a little in this domain, Hadar has maintained careful attention to the Marseille spirit: the Page of Coins has no title, no additional detail has been added - and none subtracted.

The pips remain beautifully illustrated, though again, I wish that, as I mentioned for the Camoin deck, Hadar had paid attention to the clarity of the hilt of the curved swords, so as not to confuse these with the tips of adjacent blades (as clearly differentiated in, for example, the eighteenth century Schaffhouse deck). To have maintained Saul Marteau's initials upon VII the Chariot and upon the two of Cups I just do not see merit in - nor in having inserted the misleading 1181 date adjacent his name and 1996, both of these latter of course expected, on the two of Coins (though it may be worthwhile indicating his e.mail response to this query in the Forum section of this site - and I should also add that I personally strongly favour, and have earlier posted, a 1196 dating for the earliest Marseille - these dates remain, of course, illegitimate based on historical evidence).

The titles and the back of all cards are also craftily executed - the back a beautiful reversible patterning. As stated on the box (for a change a good size, by the way, which doesn't risk damaging the cards as one attempts to re-enter therein the deck and its little white booklet), 'the originality of this Tarot also resides in the particular care given to the back design as an aide to improve the art of divination' (my translation - oh, yes, I nearly forgot - the little white book is all in French, though this may be because of the Swiss provenance for my deck).

Overall, another five-star masterpiece for a Marseille Tarot deck - my only problem will now be to which recommend, the Camoin or the Hadar?