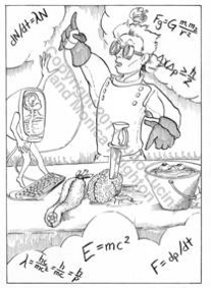 The Healing Tarot: 78 Ways to Wellness is a joint project from Juno Lucina (The Kingdom Within Tarot) and Monica Knighton (the Tarot of the Dead). Each black and white card is loosely based on the Rider-Waite and whimsically portrays a health and wellness message.


Card Images from the Healing Tarot 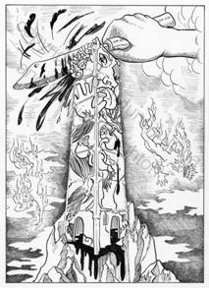 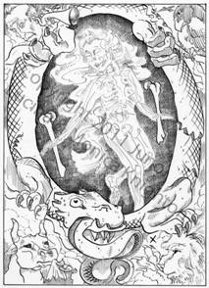 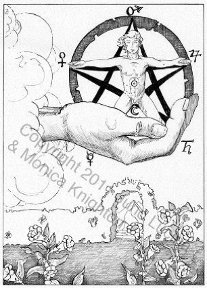 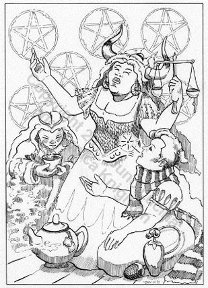 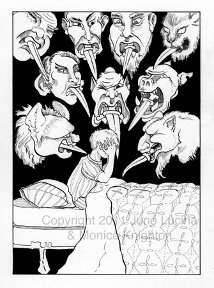 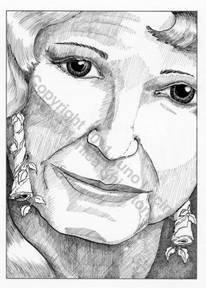 “The Healing Tarot” is a traditional 78 card deck, using traditional titles for the Major Arcana, with Strength at VIII, and Justice at XI. The suits are Wands, Cups, Swords, and Pentacles, with the Court Cards entitled King, Queen, Knight, and Page.

The foundation for this deck, or the focus, if you will, is on health and healing. The cards are viewed through the perspectives of Astrology, Qaballa, Archetypes, and traditional Tarot meanings. Through the cards the author addresses health, diet, fitness, and overall wellness. The Tarot, then, is essentially a tool for holistic healing.

“How then do we heal?” That is what this deck and192 page companion book are all about – the art of healing. Each card has an astrological association. The Major Arcana express the pure energy of one of the ten planets or twelve signs of the zodiac. Court Cards reveal the dynamic combination of the four elements (fire, water, air, and earth) with the three ways that energy expresses itself (start, change, and stop), and the three categories of the astrological signs (cardinal, fixed, and mutable). The Minor Arcana explore the key planet-in-sign combinations.

Lucina discusses well placed versus poorly placed cards, positive and negative astrological combinations, and traditional relationships of the planets with each other. She also does an introduction to the Qabalistic Tree of Life.

This deck is done in black and white drawing style. In explaining why use of color was not made, Lucina felt that in keeping to black and white the focus would be on the healing information (the health and wellness messages) being imparted, rather than on the imagery in the cards. The return to original form (black and white) was made in order to see the things that the colors might be obscuring.

In her conclusion, Lucina states:

“When living in a state of wellness – body, emotions, mind, and spirit in harmony – life is an incredible journey of dynamic exploration of the inner universe within oneself and external universe of All That Is.

When living in a state of dis-ease – imbalance, disconnection, anxiety, and discomfort – life is an extended prison sentence of bondage to the body while the physical universe becomes a confusing, painful, restrictive bad joke.”

The cards themselves are 3” by 5”, of sturdy, glossy card stock. The background color on the card backs is a reddish brown. There is a small white cross centered on the top and the bottom of the card, under which we see the name of the deck in black letters. The imagery is that of two circles – one a globe of the world, the other containing an image of Vitruvian Man, above which we see a caduceus with a light colored snake and a dark colored snake wound around it. The backs are reversible.

The imagery in the deck goes along traditional lines, with an updated look as far as dress and background.

This deck could be used by all ages, and all backgrounds. The focus on health and healing opens up the manner in which Tarot can be used, and makes this deck a great addition for any Tarot library.

I had the good fortune to meet the Author, Juno Lucina, at SF BATS in August 2013. ‘The Healing Tarot-78 Ways to Wellness’ had recently been released by Schiffer Publishing and until I met this lady I have to admit I hadn’t paid much attention to this deck. As the Fates intervened and I became acquainted with this spirited down-to-earth author I simply had to have a copy of this charming whimsical deck. As a registered massage therapist with over 20 years’ experience and over 35 years tarot reading, the idea of combining tarot and healing was at first ‘far-fetched’. I’ve been wrong before but not in such a profound way.

Juno’s background in tarot is more than just impressive. She is well-read, educated and a scholar in her own right. Plus the advantage of having a spouse in the medical profession as well as her own well rounded knowledge, has given her an in-depth knowing of a subject that has, until now, been skimmed but never explored.

Juno’s holistic approach to tarot is carefully documented in her companion book for this deck. No stone left unturned and no subject ignored. She challenges you to take ownership and responsibility for your own well-being and health. As with each deck I encounter, the best way for me to explore the deck is to take it for a spin. After acquainting myself with the images, which are beautifully drawn by Monica Knighton in black and white line art, and seeing details that reminded me a bit of going down a rabbit hole, I shuffled and pulled 3 cards randomly from the deck while focusing on my husband’s health issues. After years of one disappointment after another for diagnosis and treatment, we have hit a brick wall when it comes to ‘what next’. With nothing to lose and everything to gain the cards that appeared were:

1. The 6 of Wands: For this card Juno wrote it ‘has a positive healing effect upon any other cards surrounding it.’ You will heal, achieve your health goals and successfully change your life for the better.’ Which to me, states that if he is willing to take an active role in his healing, nothing is impossible no matter his beliefs at this point? I also read ‘achievement’ in this first card.

2. King of Pentacles: The focal point of interest, the bones. (Nothing else could be more accurate than this card for describing his current condition) ‘Consult a health professional to help you heal.’ Taking care of your skeletal system. The message also recommended resistance training, stretching, calcium and vitamin c, lysine and magnesium. All of which we’ve been discussing and it’s a simple matter (or not) of convincing him this is what he needs. He should also ‘Avoid soft drinks.’ This is another point of contention at our house.

3. The Emperor: Authority. The other side of war. (Here Juno mentions the possible need for antibiotics. Another idea I’ve been discussing with his Physician) the description of the Emperor goes on to read ‘The all father. (Structure, survival, protector. These are points he brings up daily. How with his injuries and being on permanent disability has left him feeling a strong lack of his former masculine disciplines.) Astrological. (Aries ruled by Mars (the Tower)) Juno goes on to write about possible injuries from sports, war (one triage Doctor asked him if he was in the military judging from his past injuries), sharp objects (again from former injuries) and anger injuries (from his lashing out in frustration).

To say I’m impressed is putting it mildly. I’m astounded. Juno insists this can be done with any tarot by simply following the lead the companion book gives. I can see how that would be possible, but the reader would miss so very much given the exquisite detail of the Healing Tarot’s card images. They are brilliantly drawn and the subtle messages are beyond mere description.

The cards are a sturdy stock finished with a glossy laminate for durability. I’m quite sure they are meant to last. They are a perfect size to see clearly and not so large to be awkward to handle. The cards are titled and the minors are numbered when necessary. They are printed with the card titles both upright and reverse on the cards for easy reading. The Major Arcana are titled in both upright and reverse but not numbered which I find very appealing in this deck. The images on the backs of the cards are reversible and illustrated with Michelangelo’s Vitruvian Man, the Medical Caduceus and a stylized yin-yang symbol.

The book is detailed and illustrated with a complete index and very easy to navigate. It’s a bright red with the Medical cross on the front that encompasses a lovely detail of the Ace of Wands. The storage box has a magnetic closure and comfortably holds both book and deck. It is also a bright red with the same motif as the book cover on the front of the box. The rest is designed to look like an old metal first aid kit! Schiffer has outdone themselves on the design for this one.

I am very pleased to have the opportunity to get to know this insightful deck. It is now housed at my massage therapy office where I also have my tarot consulting business. I’m delighted to have what seems to be an outside opinion right here at my fingertips when it comes to discussing the holistic health of my friends and clients many who have been with me for over 20 years.

This is a deck I highly recommend be added to your tarot collection. You will be delighted.