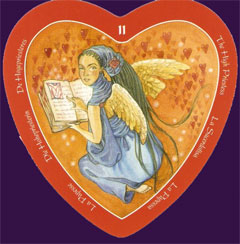 The Heart Tarot "celebrates a vital, unimaginably potent force in our lives: love. Whether inspired by romance, family, friendship, or God, this powerful emotion is at the heart of humanity." It's only the second heart-shaped deck published.


Card Images from the Heart Tarot 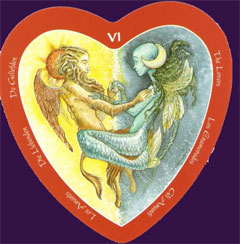 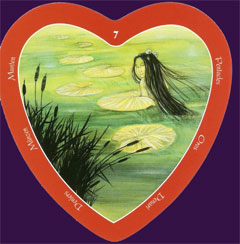 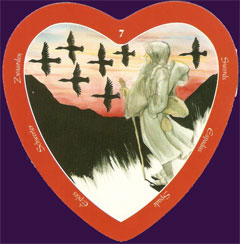 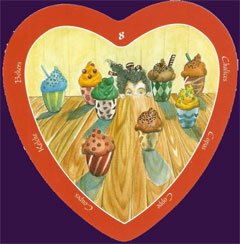 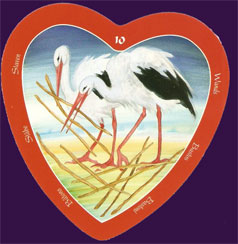 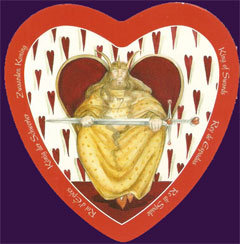 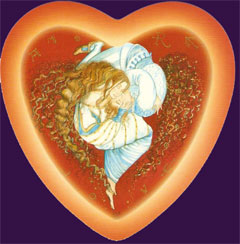 This unique, heart-shaped tarot, by Maria Distefano (who also painted lo Scarabeo’s round ‘Circle of Life’ tarot), will surely take some time to get used to. Purchased only yesterday in Watkins, London’s wonderful esoteric / new age bookshop, I believe it will take some time to come to a conclusion about this one.

This is the first heart-shaped tarot to be published. The box itself is very appealing, and has a ‘homemade’ feel about it. Look inside the box and you’ll see what I mean. Because of the heart shape, the paper on which the cover art and text has been printed has had to be folded over the rim of the box (and its lid) and carefully cut into one centimetre sections, each section folded and adhered within. The finished result gives a sense that each deck has been blessed with a ‘personal touch’, which is appropriate given the name of the deck.

The characters within the deck are very similar to those in the ‘Circle of Life’ tarot: fragile, fairy figures, their postures often fluid, giving the images life. Occasionally, animals also appear on the images, sometimes with the fairy figures, and in one occasion on their own (the 2 herons on the 10 of wands).

There are many other instances of inconsistencies, but really they are irrelevant. The deck is very attractive, clearly a lot of effort has gone into it. The major arcana’s images are faithful to the traditional meanings, and invariably given a unique twist. What I’m trying to say is that, despite the inconsistencies, I like the deck, and if you’re not a traditionalist, you’ll enjoy it too.

To end, I’d like to say that the images on Maria’s ‘Circle of Life’ tarot (also an unusual shape for a tarot – round) are 100% faithful to the traditional interpretations, but given a unique twist. Her work is a welcome contribution to the evolving world of tarot imagery.