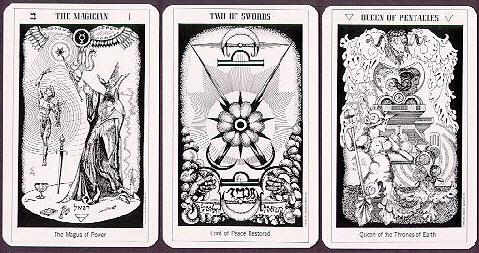 The Hermetic Tarot is black and white only, but is very highly detailed Tarot deck of 78 cards. It is an artistic recreation of a mysterious, esoteric Tarot deck by Mathers, a member of the Order of the Golden Dawn.


Card Images from the Hermetic Tarot 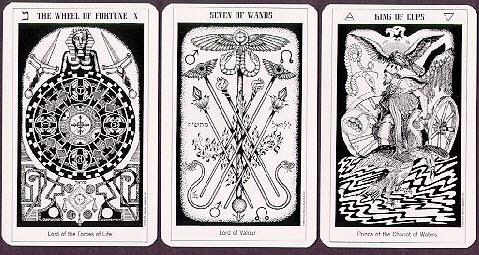 The Hermetic Tarot by Godfrey Dowson is a masterpiece. The tone of the deck and Dowson’s artwork invokes the full spectrum of powers within the tarot practitioner for spiritual divinatory work. As a Golden Dawn study deck, the card images are fundamentally focused on alchemical and astrological references, with the deck outfitted for theurgy. It can be integrated into personal rituals, meditations, and ceremonies and in fact is probably far better suited for such work than, say, the Marseille, Rider-Waite-Smith, or even the Thoth decks.

Godfrey Dowson draws heavily from elemental dignities, Western astrology as interpreted by the Golden Dawn, and the Qabalah. Corresponding alchemical symbols for the four elements and astrological symbols are embedded into each card to denote the attributions. In the Major Arcana, the Key’s corresponding Hebrew letter appears on the top left corner. In the court cards, the alchemical symbol corresponding with the classical element that the card itself represents appears on the top left and the symbol for the element corresponding with the suit appears on the top right. The Knight of Swords, for example, represents Fire (for the Knight) on Air (for the suit of Swords). For practitioners who adopt interpretive methods reliant on elemental dignities, that is a godsend. The backs of the cards are illustrated with the Hermetic Rose and hexagrams. As they are non-reversible, it may not be an ideal deck for reading with reversals. That being said, the little white booklet that accompanies the Hermetic Tarot provides the meanings of the cards in the “ill-dignified” position, as reversals are called in the booklet, which suggests that the deck is nevertheless intended for reading with reversals.

The anatomy of the Hermetic Tarot is the same as the Rider-Waite-Smith (RWS) and there is substantial crossover of subscribed card meanings to render the Hermetic Tarot user-friendly for anyone familiar with the RWS. A title is assigned to each card in the Hermetic deck and the essences of the cards as denoted by the titles are almost transferrable onto the RWS.

While I found the deck dysfunctional when reading mundane inquiries about the prospects of a romantic relationship or whether a promotion will be given at work, the Hermetic Tarot can be consulted when a seeker needs to channel or tap into greater universal life forces for personal empowerment. Thus, if the love inquiry is more focused on what greater forces are at play in a seeker’s love life, the Hermetic Tarot can answer that better than the standard decks. Rather than ask whether a promotion will be given at work, if the seeker asks about the greater forces influencing her career and professional development, the Hermetic Tarot will prove to be profoundly empowering.

Inevitably there will be comparisons between The Hermetic Tarot and the Golden Dawn Tarot by Israel Regardie & Robert Wang (1977) or the Initiatory Tarot of the Golden Dawn by Giordano Berti & Patrizio Evangelisti (2008). For me there is no comparison. Dowson's Hermetic Tarot prevails over all as the preeminent instructive tarot deck on the Golden Dawn interpretive system. The detailing, the angelic references, the 10 sephirots of the Tree of Life, the astrological, numerological, and elemental symbolism challenge me to advance my own scholastic studies of tarot and related metaphysical sciences. It is a must-have for any tarot practitioner subscribing to the Golden Dawn system.

All that said, the Hermetic Tarot is better used for spiritual reflection and meditation than everyday tarot readings to the public. It is an introspective deck, one that aids indispensably in harnessing your personal power or tapping into the universal unconscious, but I cannot imagine how exhausting it would be on the mental faculties to do a tarot reading party with the Hermetic.

This black & white Tarot is unsurpassed as a study deck or teaching deck. It empowers the reader to make full use of all aspects of interpretation at a glance.

This deck is one of the few that easily reveals the planetary influences at work in a matter, or the overall spread and thus lends itself to shades of meaning relevant to the seeker's own elemental nature and birth sign. Each card is visually identified with corresponding planets, aspects, and elements. These qualities alone improve the student's ability to grasp the possibility of deeper levels of understanding in the book of Tarot ...and to expand the readers' scope of divination.

The symbolism used is powerful and intricate.... a review of any Major Arcana reveals many influences at work. Further, the imagery is intriguing, drawing the eye and the mind into infinite possibility and facilitating psychic placement in the vast expanse of the Astral. The imagery in the Hermetic Tarot facilitates study of the Tree of Life and the Cabalistic perspective. Concepts of Force, Form and Equilibrium are graphically depicted. The Hebrew letter associated with the Major Arcana is clearly visible on each card. The names of the angels of the decans of the heavens by day and by night are included on all the Minor Arcana. Cabalistic and Hermetic symbols that lead one into deeper understanding of the Tree of Life and the Golden Dawn appear on many Tarot. This is one of the few decks that offers two male and two female images in the Court card, in keeping with the balanced view of reality offered by the Tree of Life model.

With constant referrals to SEPHIRAH on the Tree of Life, this booklet makes it clear that the study of Tarot is a deeply spiritual process. Terse, yet thorough, each card is clearly described. Reference to the interpretation of the symbols used is clear. Interpretations of the cards are given as "Dignified" and "Ill-dignified", which in my opinion is far more freeing to the reader than the standard "Reversed" interpretations given by so many decks. Reference is made to the Four Worlds, and the Paths of the Tree of Life in the instructional booklet... leading the student to a deeper consideration of the expansive nature of accurate interpretation.

The cards are printed on sturdy stock, and have born up well after 3 years of regular use. They are of normal size, which make shuffling easy, and it is easy to determine both suit and number of each.

I highly recommend this deck to all students of Tarot and use it consistently in all Workshops offered at the Studio.