Tarot in de Herstelde Orde is a Dutch Tarot of eighty cards. Two extra cards, Intuition (Juno) and Truth (Jupiter), have been 'restored' to the deck, and some of the major arcana reordered. The imagery is based on that of the Rider-Waite, but has some changes in imagery and has been rendered in a more attractive and vibrant artistic style.


Card Images from the Tarot in de Herstelde Orde 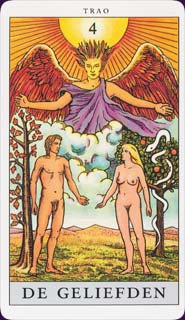 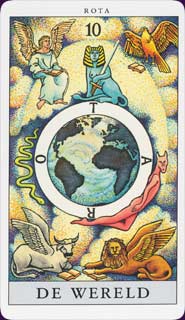 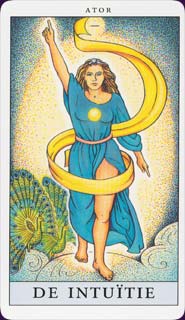 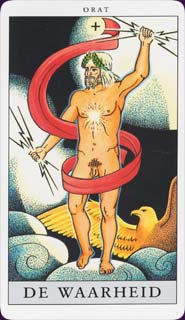 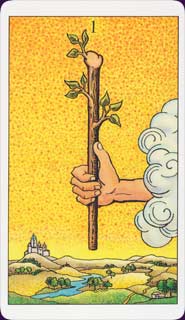 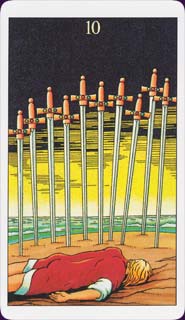 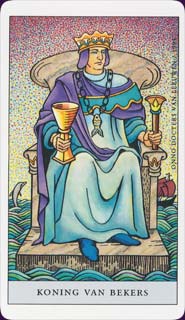 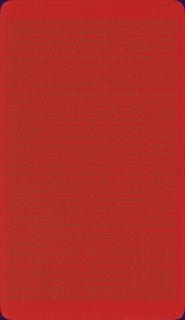 The Tarot in de Herstelde Orde - the Restored Order Tarot – is a set of eighty cards with twenty-four major arcana organised into a different sequence, in order to show the life cycle in pictures. The changed titles and ordering of the major arcana are:


Temperance is now before Death; explained as hope and salvation coming before death, and before the pretense and decay. The Empress is immediately before the Chariot, and is then followed by the Hermit – explained as development, via success, that leads to a deepening. In this order, the 24 majors become a ‘life cycle as a story in pictures’, and they can also be divided into twelve complementary pairs, or ‘Principal Arcana’. Each major arcana card is titled in Dutch and also features one of the taro/orat/rota four letter combinations at the top of each card.

The two extra cards ‘restored’ to the deck are Intuition, represented by Juno and standing for the female, negative, and yin aspect; and Truth, represented by Jupiter and standing for the male, positive, yang aspect. The authors, Onno and Rob Docters van Leeuwen, believe that these two cards were historically part of a Tarot deck, but that Jupiter and Juno had been lost; the only vestiges remaining being the two blank cards including in many Tarot decks. The authors are very definite that this is the correct order and number of cards, and that the Tarot can only be properly worked with in this form.

The extra two majors allow the total of eighty tarot cards to be associated with various other spiritual systems – Tao, the Holy Trinity, the Zodiac, the 24 hours in a day, the Celtic Tree Alphabet, Nordic Runes, King Arthur and the Knights of the Round Table - and to be organised in interesting ways. In particular, they can be organised into a ‘mandala’ of twenty card quartets (groups of four) that are arranged in anti-clockwise order. Half represent the material world; half the spiritual. The four corner quarters in the mandala have two majors and two minors, while the side quartets have one major, one minor, and one royal (court card). For example:


"The four arcana within one quartet form a symbolic unit that refers to the principle or law captured by the Major Arcanum in that quartet." It’s an interesting idea, which can deepen the interpretation of a card in a reading - and potentially help with learning the meanings, by linking one card to the others in its quartet.

Ordering aside - the deck’s art by Onno Docters van Leeuwen is a nice rendition of Rider-Waite illustrations. The familiar images, originally by Pamela Colman-Smith, appear with a higher level of resolution, and the background sky has a pretty, dotted mosaic effect. The backgrounds are also generally colour-coded by suit, which assists with interpretations in a reading.

There are some changes to the RWS symbology that slightly change or clarify the card’s meaning. The wands in the Eight are moving so quickly they are shedding leaves; in the Ten of Swords, the swords not stabbed into the man, but into the ground behind him. In the major arcana: Death holds an hourglass; the Hierophant has a man and a woman at his feet; the Chariot has very stationary feel with a lack of movement. The Wheel has an image of the Earth at its centre, and is titled the World; while the traditional World card becomes the Universe.

The backs of the cards feature a geometric, gold-on-red design representing Tao, 'the way' and symbolises the cosmos through a line that is without beginning or end.

The cards and the packaged companion booklet are printed only in Dutch, but a 32-page photocopied leaflet in English is available. Titled ‘Instructions to the Complete New Tarot’, it offers a basic explanation on the quartet concept, card meanings, and translations for the card titles. The ‘Complete New Tarot’, a 460-page textbook by Rob Doctors van Leeuwen, offers a more comprehensive information on the reordering, quartet structures, specific meanings, and the author’s theories as well.

Whether you agree with the author’s justification for reordering the cards or not, the Restored Order Tarot deck is an attractive version of Rider-Waite art and, through their concepts of mandalas and quartets, offers a novel way of working with Tarot cards.