Tarot of the Hidden Folk

The Tarot of the Hidden Folk has been published in several forms, including the 22 card Tarocchi del' Alba Dorata, and 78 card Tarots of the Golden Dawn and Enchanted Tarot. This version has 78 cards of nature spirits and representations of elemental forces.


Card Images from the Tarot of the Hidden Folk 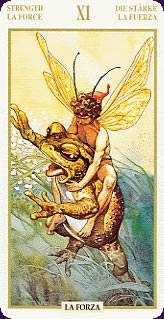 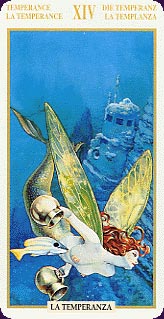 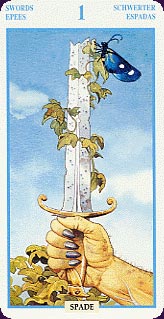 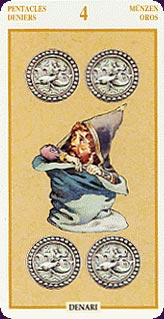 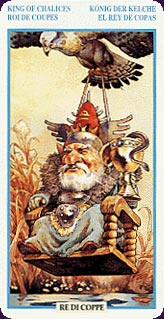 Tarot of the Hidden Folk Sample Images Courtesy of the Tarot Garden.

Tarot of the Hidden Folk Review by Bonnie Cehovet

Tarot Of The Hidden Folk is a 78 card deck in traditional format: 22 Trumps (with traditional titles), four suits (Wands, Chalices, Swords and Pentacles) and four court cards per suit (Knave, Knight, Queen and King). The cards themselves are a wonderful size for those of us with smaller hands - approximately 2 5/8" by 4 3/4". They are of of high quality, glossy card stick, and will hold up well under heavy use.

The backs have a 1/4" white border, enclosing a lovely presentation in mutated colors - at one end we see a child-like form, with wings, having a great time on a swing; on the other end we see a gentle scene with a "wee folk" man and woman sitting under a leaf which has a ladybug on it. The couple are surrounded by the bounty of the fields. For those who use reversals - yes, the card orientation would make itself known before it was turned over, but not in an obvious manner. The card faces are presented with the same 1/4" white border, with the scene, again in muted colors, in the center. The card name appears in English in the left hand corner and Italian in the right hand corner, then again in the lower left hand corner (French and Spanish) and the lower right hand corner (German and Dutch). The card number is centered along the bottom.

The scenes themselves are done in fairytale style, with landscape, human sized folk and wee folk, as well as animals, when appropriate. My one real problem with this deck has to do with the nudity. Only a few of the cards present this issue - and they are invariably women. I have to take exception with this. The whole suit of Chalices is affected, as well as the Lovers, the Chariot, Justice, Temperance, the Devil, the Stars, the Moon, the Queen of Wands, the Two of Swords, the Five of Swords, the Nine of Swords, and the Queen of Swords.

To be fair, I do like this deck, and there are some wonderful cards: the Fool (which shows a human sized person seated, with a knapsack over his shoulder, a frog balanced on one arm and a wee gentleman balanced behind him on his sword); the High Priestess (which shows a wee folk lady with wings, seated on a green gourd with an open book in her left hand) and the Knight of Chalices (which shows a wee warrior riding on a dolphin with a chalice in his right hand and a sword in his left hand).

The 22 major arcana become the 22 Keepers of Universal Power, and represent the fundamental energies of nature. The most powerful forces are the 16 Governors, which are the 16 court cards of the Tarot. They can act directly on the four fundamental parts of nature, and can at time mirror human beings. They are also said to act through the 36 Lords (the pips, or numbered cards of the four suits). The 4 Roots are: The Force of Everlasting FIve (Ace of Wands), The Force of t he Water of Life (Ace of Chalices), The Force of Eternal WInd (Ace of Swords) and The Force of Mother Earth (Ace of Pentacles).

The LWB (Little White Book) defines the function of the suits as: Root of Fire (Wands): social life; Root of Air (Swords): psycho-physical health and spiritual well being; Root of Water (Chalices): love and affection; and Root of Earth (Pentacles): work and money.

The LWB presents titles and keywords for each card, as well as what is termed a Remote Action Plan, which is a spread that makes use of each of the qualities represented by each of the four suits in making a plan of action concerning any issue. This is not just a spread, the authors indicate that once spread out, the cards should be meditated on to obtain deeper meaning.

All things considered, if you like working with non-traditional decks, this is a deck that can be worked with very easily. I don't feel this would be a primary deck for anyone, but it is an interesting deck and does open new avenues of thought.

Note: This deck was previously published as The Enchanted Tarot.


Complete Details of Tarot of the Hidden Folk


Similar Decks to Tarot of the Hidden Folk