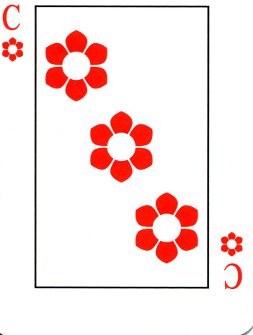 The High Deck offers a new take on symbolism and psychology in its 38 cards, with 32 characters divided into red and black houses and 8 individual person cards.


Card Images from the The High Deck 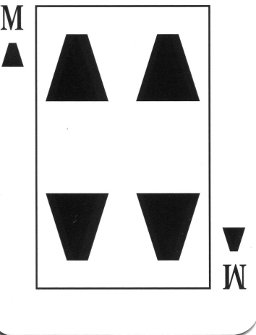 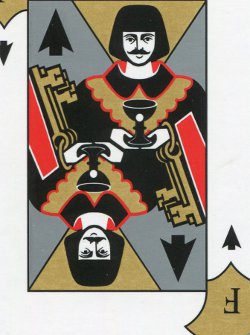 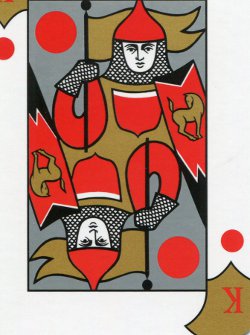 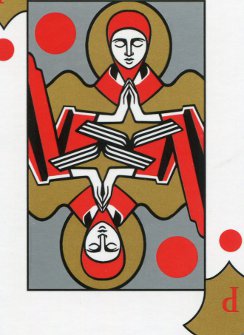 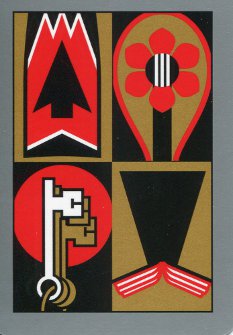 If anything was/is a labor of love, it would be this 38 card deck and 135 page companion book. In his acknowledgments, Wald gives intense thanks to his father, Arthur Amberstone, for conceiving the deck, writing the manuscript, designing the cards, and inventing the games. Wald also acknowledges the role that his wife Ruth Ann played in birthing this project, and the role that Tarot luminary Robert M. Place played in restoring the original and designing the back of the cards.

I was quite interested to see that Wald imported the spirit, and much of the substance of the High Deck, into his work with the Tarot. That alone tells me that this deck has substance. Anyone who has taken a class from the Tarot school on the symbolism of the Tarot will appreciate the symbolism in this deck. When I first heard the concept of games associated with this deck. It was a bit off putting. One does not play games with a serious subject! ;-) Then I started thinking about how quickly I came to love Jude Alexander’s “Tarot Game”, and how designing spreads really is very much a “game”. Reflecting back on the Tarot, it not only began as a game, but was used as a form of communication. That settles that!

1. A beautifully done, magnetic lid box (signature Schiffer!) in black, silver, gold, and reddish orange.
2. 38 beautifully illustrated cards.
3. A 135 page companion book that fully explains the symbolism of the deck.
4. Games that can be played to empower the Seeker.


The purpose behind this deck is to create an archetypal mirror for the Seeker to gaze into and come to a deeper understanding of themselvesand their issues. One of the things that can be created using this deck is something called the “Motley Player”, a symbolic being that is created in the Seeker’s image. The Motley Player then acts somewhat akin to the Fool in the Tarot. Where the Fool is the one taking the journey that is the Tarot, the Motley Player gets to play the games that are presented.

Each Major has a corresponding Minor. The Knight has the Vassel. The Priest has the Sinner. The Father has the Child. The Lover has the Maid.

There are 32 Characters in all.

The High Deck is a vantage point from which you can perceive yourself afresh.”

“The imaginary world of the High Deck is amodel of the creation of all worlds.” - From the book.

The cards in this deck are intended to be seen as a mirror, a mirror of the Seeker they are. From the book:

The first thing that you want to do when working with this deck is to create that symbolic image that is you. This is called the Motley Player, and this is the person that will represent you in any games that you play with this deck. The instructions on how to do this are quite clear. It is seen as a playful representation of our initial movement in our struggle towards identity. I had a lot of fun with this, and it reminded me of Wald and Ruth Ann’s work with the Aces and understanding self. It interesting part of this is addressing color preferences, and how they are perceived if the Seeker is male or the Seeker is female.

The cards themselves are 2 ˝” by 3 ˝”, of glossy card stock. For somebody with small hands like me to use the deck. The backs show a quarter inch silver border surrounding images of the four Houses (Sun, Flower, Pyramid, and Arrow). The backs are not reversible.

The card faces show a white border around an inset image. The Major Person cards show a gold inset in the upper left-hand corner, with the House icon under it. The letter in the inset indicates the name of the Person (“K” is Knight, “l” is Lover, “P” is Priest, and “F” is Father).The Minor Person cards show the initial of the Person in the upper left hand corner (“C” is Child, “M” is Maid, “V” is Vassel, and “S” is Sinner), with the House icon under it, and the House icons in the middle of the card (one for Vassel, two for Sinner, three for Child, and four for Maid). The letters and icons are color coded - Red and Black The Major Person imagery is of medieval origin.

Maid of Pyramid: The Maid in the House of the Pyramid tries to build a fire with damp wood.

Priest of Sun: The Priest in the House of the Sun castigates and drives out the sinful

Knight of Sun: The Knight in the House of the Sun makes of everyone a profitable servant.

Child of Flower: The Child in the House of the Flower loses his purse only to find another.

Father of Arrow: The Father in the House of the Arrow ceaselessly devises against poverty and disorder.

This is a complex deck, with many levels of meaning. You don’t throw the book away here … it is essential to understanding the cards, and getting the most out of them. Read with cards in hand, and book in hand. I am fascinated by the Motley Player, and the wisdom he brings. As we grow and change, I think we should recreate the Motley Player to see how far we have come on our journey.

This is an empowering deck for those that seek to know themselves!


Complete Details of The High Deck


Similar Decks to The High Deck