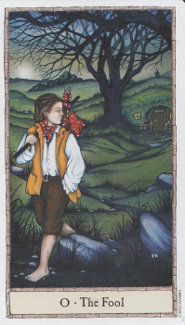 The Hobbit Tarot draws on the world of elves, trolls, dragons and wizards as created by Tolkien in his novel, The Hobbit. The illustrations for the 78 cards have been created by fantasy artist, Peter Pracownik, who also created the Dragon Tarot.


Card Images from the Hobbit Tarot 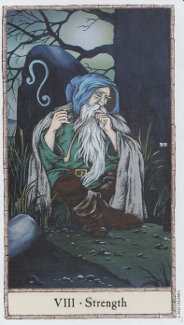 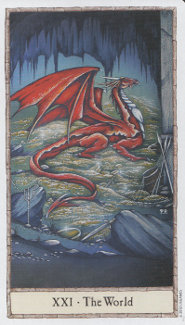 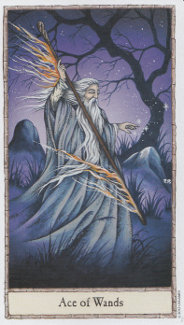 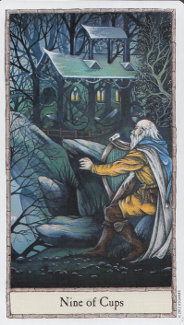 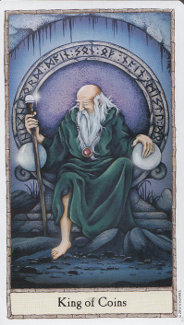 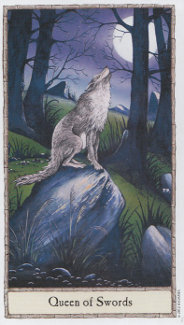 “The Hobbit Tarot” is a 78 card theme deck, following the traditional structure of the Tarot, with the overlaid theme of J.R.R. Tolkien’s work “The Hobbit”. The 22 cards of the Major Arcana are defined as the major mysteries/themes around which our lives orbit (birth, death, love … things that are universal to all of us), while the 56 cards of the Minor Arcana are said to represent situations and events in life. Traditional titles are kept for the Major Arcana, with Strength at VIII, and Justice at XI. The suits are Wands, Cups, Swords, and Coins, with the Court Card titles King, Queen, Knight, and Page.

In the introduction to the accompanying LWB (Little White Book), Donaldson notes that the world that constitutes “The Hobbit” is a world of gentle magic and mystery. He likens the journey of Bilbo Baggins to the journey that we all follow in life, clinging to what is known, with a disdain for change. Each character that was chosen to represent a particular Tarot card was chosen after due consideration. In bringing together the world of the Tarot and the world of the Hobbit, a new personae has been created. Reader response and feedback is encouraged, through the respective sites of the author and the artist.

Terry Donaldson is a professional Tarot reader, guide, and healer. He currently runs the London Tarot Centre through his shop in London. He has assisted Peter Pracownik with the creation of “The Dragon Tarot” and “The Lord of the Rings Tarot”.

Peter Pracownik is at the forefront of what is termed the Visionary School of art. He has made his mark in both the UK and American markets in the New Age/Fantasy School of modern artists. His prior work includes “The Dragon Tarot”, “The Lord of the Rings Tarot”, the “Imperial Dragon Oracle Deck”, and the “Woodland Wisdom Oracle Cards”.

The LWB presents the cards in text only – no scans. There is a discussion of the card background (greatly appreciated in a theme deck!), followed by the upright and reversed divinatory meanings.

There is a very special section where spreads relevant to the Hobbit theme are presented, including The Ring of Gollum Spread (giving a great over-view/snapshot of where the Seeker is at the time of the reading), The Sword of Aragon Spread (an expanded Past/Present/Future spread), and The Arkenstone Spread (a spiral spread that is read in storytelling fashion).

The box that the cards and LWB come in shows an illustration of the Four of Cups on the front, and the Fool on the back. The cards are 2 ľ” by 4 ľ”, of glossy card stock. The backs show a Ľ” white border, surrounding a gray/blue inner background. Super imposed on the background we see the Ring of Power, complete with its script “One Ring to rule them all”. The backs are reversible.

Some of the cards in this deck evoke traditional Tarot well, some do not. The Magician is a card that works, but not in the traditional manner. All of the elements are represented, but we do not have the traditional “As Above, So Below” gesture, and the magician himself, represented by Gandalf, is older. The Hieropant, represented by again by Gandolf, works well. He is working with deep magic through the crystal on his staff, and the owl above him representing wisdom is quite appropriate.

Strength shows Thorin Oakenshield getting ready to reclaim the Lonely Mountain from the Dragon Smaug. The Ace of Wands shows Gandolf with his fire-throwing wand. The High Priestess shows two pillars holding up a royal arch. Over one pillar is a circle of light, over the other a circle of dark. In between the pillars is an open book – the left hand page reads “The lost key to the Book of Dain”, while the right hand page reads “Lord of the Misty Mountain”. Over the open pages we see a crescent moon.

The King of Coins shows Dain the Second seated on his throne. Over his head, inscribed in Runic lettering, are the words “High Lord Dain, Son of Nain, Misty Mo…”. The Nine of Cups shows Elrond’s Last Homely House. The Queen of Swords shows a female Wang calling for her pack. The World shows the Dragon Smaug sitting atop a mountain of treasure.

In this deck we see superimposed on the traditional Tarot a world of Elves, Dragons, Dwarves, Wizards, Trolls, and the occasional Human. This is a collectors deck for those that connect with the Hobbit theme, or those that like mystical, fantasy art. It is not a deck for beginners, and it is not a deck to learn from. As a additional to any collection, it is invaluable, as it stretches the imagination and brings new perspective to the world of the Tarot and the world of Bilbo Baggins.

This deck provides a parallel between the storyline of Oxford professor, JRR Tolkein’s novel of ‘The Hobbit’ and the experiences we have in our own life. It seeks to provide caution and wisdom to help us achieve our aims and advise others on how to achieve theirs as we follow the hero’s quest through many adventures. The booklet offers interpretations of each of the 78 cards and includes a 12 card ‘The Ring of Gollum’, a 9 card ‘The Sword of Aragon’ and a 14 card ‘The Arkenstone’ spread, the last, an unfolding as a spiral to be read in story-telling fashion, from the centre outwards.

UK based Peter Pracownik is at the forefront of visionary genre artwork and has produced 78 inspired, creative artworks for this deck. He was also commissioned by US Games Systems Inc to produce the artwork for the ‘Dragon Tarot’, the Wyvern Collectible card game, ‘The Lord of the Rings Tarot’, the ‘Imperial Dragon Oracle Deck’ and the ‘Woodland Wisdom Oracle Cards’. He has held successful exhibitions in Hollywood and has made appearances on TV in the UK and US.

London based Terry Donaldson is a professional tarot reader, guide and healer and the author of several books on tarot, magic and folklore. He travels extensively and has studied in Greece, Iran and India. He previously collaborated with the artist, Peter Pracownik on ‘The Dragon Tarot’ and ‘The Lord of the Rings Tarot’.

The card backs are imperceptively irreversible and provide a kabbalistic style geometric web design with a golden ring to represent each of the sephirot. I was pleased to see the glyph as, it reminds me that within the chaos and violence of this story, morality and spiritual values play a vital part.

I have chosen two cards as samples:

The artwork of Bilbo Baggins (which appears on the rear of the packet) features as the card O The Fool. It depicts Bilbo stepping out barefoot from his beloved home in the hills, wearing a waste-coat and with his knapsack thrown over his shoulder, as he embarks on the great adventure he has been chosen for. Divinatory Meaning: A new chapter of life is presenting itself, be open minded to this personal journey. In a spread, this card energises the part which seeks adventure and spontaneity and requires a leap of faith to find out where it takes you. There is a need for caution. Risks must be assessed. Balanced opinions are required. Reversed, the card shows a reluctance to make a commitment or the following of an unwise path, either by the seeker or by a foolhardy person who causes disruption.

The card of Three of Coins shows three Trolls with a large bag and poisonous toadstools growing in the foreground. The monsters have captured the Companions and are preparing to eat them. But Bilbo thinks quickly and plays for time, allowing an eventual escape. Divinatory Meaning: Learning new skills and abilities, professional growth, establishing oneself, and becoming more aware of one’s abilities. The card also pertains to team activities and good organisation. It is not possible to create anything without support and co-operation. The presence of the card in a reading portrays the discovery of a new passion. Reversed, it indicates an inability to see the wood for the trees, or being overly attentive to details or rules, or too critical, absorbed, or failing to read the right signals. It can also question present knowledge and whether it is up to date.

I found the deck, and the storyline, has a staunch masculinity, similar to the myths of the Anglo Saxons period in our history which originally inspired the novelist.