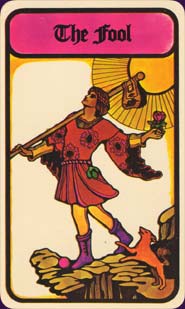 What is known as the Hoi Polloi Tarot is a Rider-Waite Tarot clone from 1973 intended for games and finding out about yourself and the future. The deck has been redrawn psychedelic colours and is without some background and finer details, but sticks closely to the original images. Also the last RWS clone published before U.S. Games began enforcing their copyright. 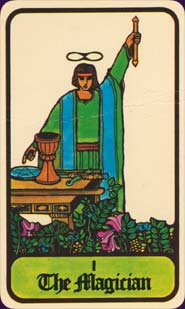 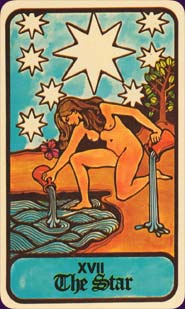 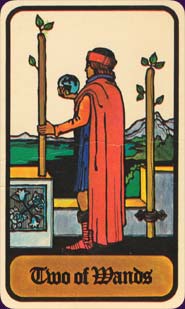 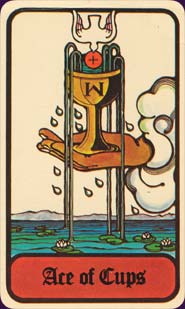 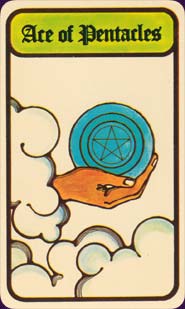 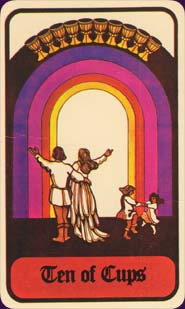 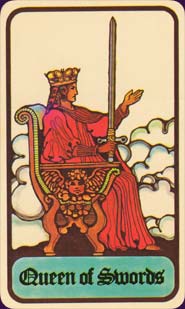 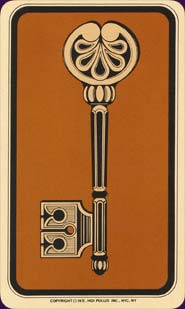 The year is 1972; the place, New York City. And as the giant of the tarot world we now know as US Games is busy trying to obtain copyright for the Rider-Waite-Smith (RWS) tarot, one small, independent company is releasing its own version of the deck. Named simply “The Tarot”, it is the last commercially-produced tarot to use Pamela Colman-Smith’s drawings before US Games becomes the only company legally allowed to do so.

Thirty-five years on and the Hoi Polloi Tarot, as it is now known (after Hoi Polloi Inc., the company that made it), is an acid-bright reminder of how times have changed. The colourful graphic style of the Hoi Polloi couldn’t be more different to Pixie’s detailed illustrations but there’s no doubt that the composition and contents of each card were lifted directly from her work under Arthur Waite’s instruction in 1909. Try that now, and you’d most likely find yourself in court.

But despite the obvious copying, there are subtle differences between the two decks, mainly in what the Hoi Polloi lacks. There is no stained glass window in the 4 of Swords, for example, and no garden leading to distant mountains in the Ace of Pentacles. The figure in the 5 of Cups is crying over spilled nothing, and the Hierophant appears to have mislaid his keys. If you intend to read with the deck and are familiar with the RWS, these changes may bother you but otherwise the sparse imagery gives the deck a clean, uncluttered look. More intriguing, perhaps, is the switching of Strength and Justice (in this deck, Justice is VIII and Strength is XI), pledging allegiance to the Marseille tradition over the RWS.

As a deck in its own right, the Hoi Polloi is vibrant and appealing. The gum-drop colours – mainly turquoise, orange, raspberry, lime green and purple - are accentuated with heavy black outlines and the sometimes uneven colouring makes it seem as if the deck was drawn using felt-tip pens. Some cards are spectacularly attractive, Strength being one of them; a few others seem either brash or muddy, but thankfully these cards are in the minority. One feature of note is the wide range of skin-tones featured: intentional or not, it’s an improvement on the RWS and one that gives the deck a multi-cultural feel.

The card titles are printed in an ornate, calligraphic font which looks a little out of place next to the stylised artwork. Each title sits in a coloured frame, which for the Minor Arcana is coloured-coded: orange for wands, red for cups, blue for swords and green for pentacles (for the Majors it seems anything goes). The colours used for the wands and cups are very similar and because of the variations in printing occasionally look identical but this is only a minor annoyance. The card backs are non-reversible, featuring a key design on an orange background.

At 4.25 x 2.5cm, the cards are a good size, easy to handle and shuffle. The dry varnish means the cards grip well but also have a tendency to stick together at times. However, this does make the cardstock feel thicker and more substantial than that used for most modern decks. The print quality is generally very good, with only a few cards suffering from minor blurriness caused by misalignment.

Although the Hoi Polloi is long out of print, it is not so rare as to be out of reach of the everyday tarotist: a recent ebay auction for a complete set (including the original box and booklet in excellent condition) ended at $40 (approx. Ł20). If you’re after a copy, you’ll still have to do some searching but it will be worth it. The Hoi Polloi is a rare thing: a collector’s deck which is also very readable, and one which will hopefully continue to stand the test of time.