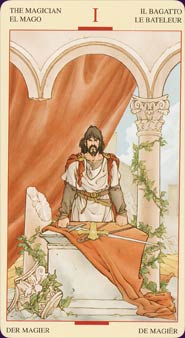 Tarot of the Holy Grail

The Tarot of the Holy Grail is inspired by the legends of the Grail, the Knights Templar, and the Crusades. It's a very masculine deck of war and religion, and women appear infrequently.


Card Images from the Tarot of the Holy Grail 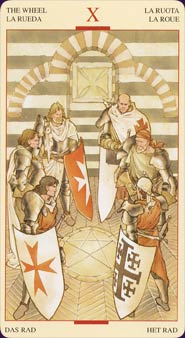 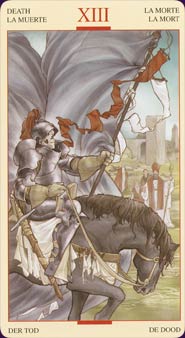 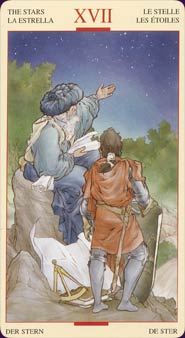 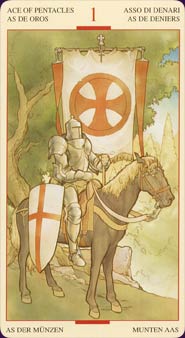 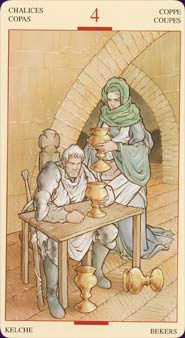 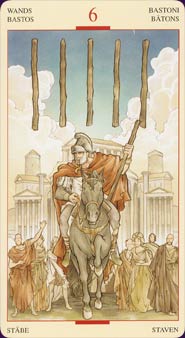 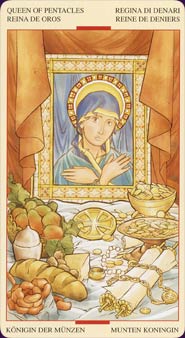 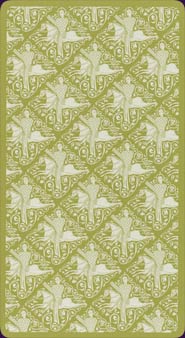 “The Grail, the Templars, the secrets of medieval mysticism are carved in the Tarot like a map that leads to the most sacred of treasures.”

Created by Lorenzo Tesio and illustrated by Stefano Palumbo, the Tarot of the Holy Grail is a masculine deck of warriors, monks and priests, pictured in their quest for “The Holy Land, Jerusalem, the Holy Sepulcher and salvation.”

The booklet explains that during the Crusades, three orders of warrior-monks were formed to defend pilgrims and sacred places – the Knights Templar, the Knights Hospitaler, and the Teutonic Knights. Legendarily, they also held Christian relics, the most famous of which was reputed to be the Grail of ‘Holy Chalice of the Last Supper’, and a symbol of divine grace. This forms the basis of the concept for the deck, and the images are of the battles and travails of the knights on their physical journey.

The major arcana cards are associated with historical characters or events in some cases – The magician is Hughes de Payens, the Empress is Queen Sibyl of Jerusalem, the Devil if Baphomet, the Tower is the Fall of Jerusalem – and have a war-like or military feel. The Magician stands between one whole and one broken column, his tools placed on a red-cloth covered stone table. A rocky cliff and tall castle towers in the distance. The Fool is resolute and carrying a large burden, without a dog in evidence. The High Priestess, normally a symbol of feminine power, is instead an image of two knights kneeling at a throne and is more like what you’d expect for the Hierophant. (The Hierophant actually shows a scene of a warrior being knighted.) Even the Lovers card shows two combative looking men.

The minor suits are Chalices, Pentacles, Wands and Swords, and according to the booklet, have an esoteric link with the Tree of Life of the Cabala (and its spheres), the Order of the Templars, Pagan Esotericism, and the Combatant Orders respectively. This is more of a conceptual link shown by the card’s title in the booklet, rather than overtly in the Rider-Waite based minor scenes. For example:

Ace of Pentacles – The Templar Cross – The perfect gain, acquisition, ecstasy and success, material ties, control of the elements at play.

The faces of the cards have cream borders with the numerals printed in red and titles in black. The colours are well-matched with the scenes (illustrated in muted and natural colours) and don’t detract or clash. The backs of the cards have a tiled appearance with diagonal squares in white and olive-green featuring a stylised knight on horseback.

The booklet is Lo Scarabeo’s usual small booklet in English, Italian, Spanish, French and German. It has reasonable meanings for the small size allotted – a paragraph of keywords and short phrases. The original spread of ten cards is called “The search for the Grail, each the goal by interpreting the clues.”

Almost a complete opposite to feminine decks like the Oracle of the Grail Code, the Tarot of the Holy Grail is a masculine - almost blokey - tarot deck, and a different depiction of the Grail quest. I found it difficult to connect with, but others may find the activity-filled scenes to be an adequate spring-board for interpretation.