I Am One Tarot 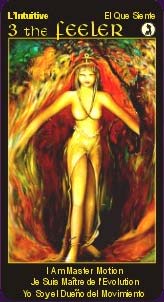 The I Am One Tarot is a spiritual reworking of the tarot. The cards are tri-lingual, have vivid artwork and an 'I Am..' statement is associated with each card.


Card Images from the I Am One Tarot 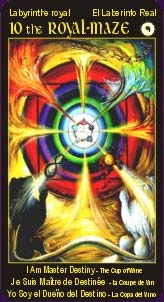 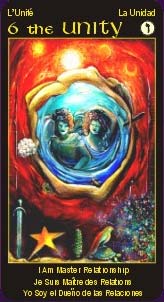 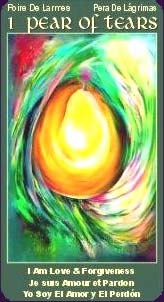 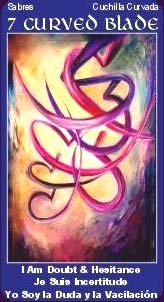 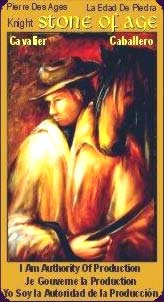 I Am One Tarot Review by Solandia

The I Am One Tarot is a spiritual deck. It has artwork that is intended to access the reader's subconscious mind. The colours are strong, the images as of a dreamscape with strange shapes and flowing perspectives. The art sometimes gives more of an impression of an object than a depiction of the object itself.

The court cards are a little confusing for those used to Rider-Waite or Thoth style courts - this deck combines both and uses Prince and Princess, Queen and Knight. The suits are Two Headed Serpent (Wands), Curved Blade (Swords), Pear of Tears (Cups), and Stone of Age (Pentacles), symbolising spiritual, mental, emotional and physical consciousness. The backgrounds of the cards are a different colour for each suit, being red, deep purple, forest green and yellow-gold respectively with white or yellow main titles and white (wands, cups, swords) or black (pentacles) keywords.

The major arcana (or 'Master tarot cards') have titles all altered from the norm. The Fool equivalent card appears at the end of the majors and is numbered 22 instead of 0. The cards are titled as follows:


Each of the twenty-two majors are also associated with one of the twenty-two Hebrew letters, as the artist believes that a school of tarot was passed down from an Ancient Egyptian heritage and adopted by the Hebrews. The Hebrew symbol appears in relief at the top right of the card, next to the title.

The deck is multi-lingual and can be read in any of three languages, English, French or Spanish. The (not-so) little white book is equally divided into sections for each language, and the cards are triply titled and sub-titled. Every card contains an 'I Am…' statement at the bottom of the card, from 'I Am Master Communication' for the Changer card and 'I Am News' for the Ace of Curved Blades.

The book has no explanation of tarot history or sample spreads, it concentrates purely on the card meanings. There is a good paragraph for the meanings of each of the majors, as well several keywords for additional meanings. It explains which of the Hebrew letters is shown and its main representative keywords. (Eg. 'The Changer - Hebrew Letter ALEPH represents PRINCIPLE.')

The I Am One Tarot departs from the standard tarot in nomenclature and artistic style, but the structure is similar enough and the documentation is good. It can be used for most tarot purposes - self-improvement, meditation, readings, and so on - and intermediate and advanced tarot users should find it interesting. Even tarot novices should have no problems using the deck.


I Am One Tarot Review by Maya Britan

The Story of One Artist's Journey into The Unknown to Recover Lost Treasures from The Late 18th Egyptian Dynasty and Her Return with 22 Universal Laws, Long Missing from the Conventional Tarot.

Personal sacrifice always seems to be involved when it comes to magical/spiritual stories of "lucky" individuals who happen to tap into their destiny's "special work".

Life seems to move in a repeating format where something is always taken away from you before it can be replaced with something new and more evolved. Thus was the case, once again, for the artist Maya Britan, who almost lost it all: her business, husband, and child. "Life turned weird," she says. "In fact, I came to realize that I don't have a life anymore, period".

Britan was born in Israel and spent several years in Europe and Brazil before coming to Los Angeles in 1986. In 1989, just as everything was crashing down around her, Britan realized she was being mysteriously hunted by an unfinished tarot project from the Sixties. She was receiving information from several different sources. One was a psychic reader who fervently believed that Britan was an integral part of the project. Another came from a publication located in the high deserts involving 4th dimensional intelligence.

As she delayed her response to the whole thing, it slowly began to dawn on her that she was crossing paths with a truly fascinating story. She finally made contact with Rosalind Sharpe, one of the last surviving members of the unfinished tarot project from the Sixties.

Britan learned that the project consisted of a book entitled: "The Word of One". Its content was channeled by a group of 5 members up in Carmel during the beginning of 1962. This intriguing item revealed precise instructions on how to create tarot books. The whole project began during an innocent game with an Ouija board. During the session, an entity announced itself as "WE". When they asked for identification, the "WE" of the board said firmly: "WE ARE ONE". It was then that the Carmel group realized they are not dealing with a dead man's spirit but rather a collective mind of all 5 members speaking to them as ONE person. Only when the two women met had Britan's journey into the past begun - a journey that would take her not only back to 1962, but thousands of years before, and equally further into the future…

A self-trained artist, she began exploring the Hebrew spiritual world at an early age — looking into traditional realms such as Kabbalah, Numerology, ancient Hebrew, and Christianity. Britan translated the "Word of One" into Hebrew and broke it down into numbers. Once I got to look at the numbers of this book, I was amazed at what I found. This text had a balanced rhythmic interchange that I had found parallel to very selected portions of the old Bible.

The meeting between Britan and Sharpe took place in a tiny, dark little apartment in Carmel and was witnessed by a young woman from B'Hai who was dressed all in white. The meeting concluded in Sharpe giving Britan her full blessings to continue the project of ONE. Rosalind passed away soon after and Maya finished painting the whole tarot deck (78 oil paintings on canvas 30" x 40" each). She kept her work environment as magical as the nature of the art, using very little light and sometimes only candles.

The day that all 78 completed paintings were photographed by her husband, Oscar Bustamante, something unforgettable occurred. The sky above their building was blanketed with an army of screaming black crows, as if celebrating the birth of the ONE.

Soon after, an invitation came down from the high deserts to meet with "Commander Haton", a 4th dimensional super intelligent being responsible for the Phoenix publication and the "Contact" newspaper. (Some highlights can be found in the movie "Contact"). She left town and moved to the mountains near the high deserts. It was there that she managed to study and develop the "I Am ONE" Tarot". This required an intense educational period consisting of great research in Greek, Sumerian, and ancient Egyptian mythologies, all vividly conducted by "Haton" himself. The access to such historical resources resulted in a set of 22 Universal Laws to be woven back into the original meaning of the 22 Major Arcane Tarot.

These laws had been removed during the late 18th Egyptian Dynasty. The ones responsible for removing that portion from our history are the Amon Egyptian priests (the word 'amon' means many) who took over the ancient civilized world thereafter. Now, the word of ONE is being brought back into our world's awareness by the Aton of our times (the word ‘aton' means one). It may be me, it might be you, yet ALL IS ONE ­ and ONE IS ALL. Why does it sound so familiar?


Complete Details of I Am One Tarot


Similar Decks to I Am One Tarot