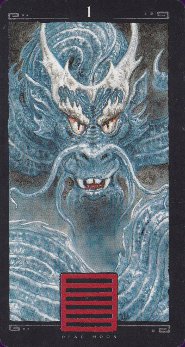 The I Ching Dead Moon has 64 cards, illustrated by artist Luis Royo. The cards are darkly atmospheric, with the I Ching hexagrams inset at the base of each card. There are also 15 instruction cards included with the deck, explaining the I Ching and the hexagram meanings.


Card Images from the I Ching Dead Moon 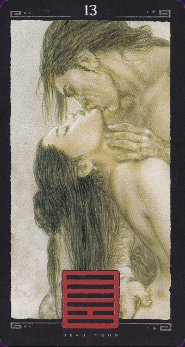 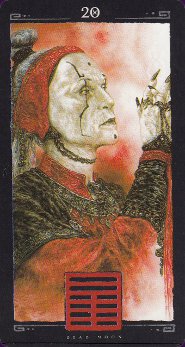 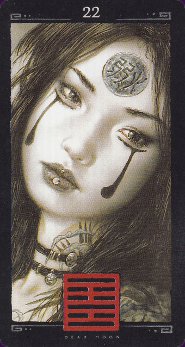 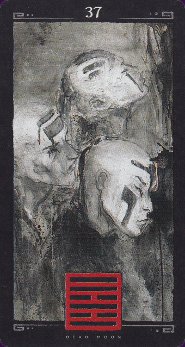 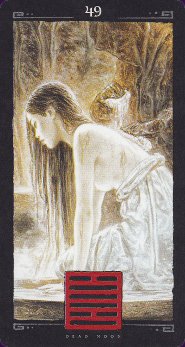 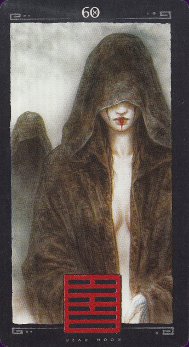 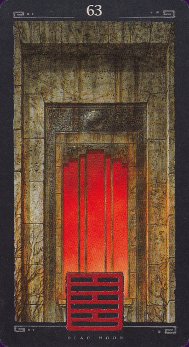 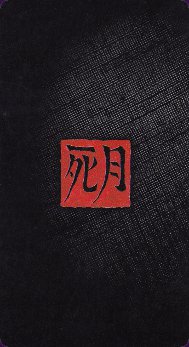 I love the I Ching Dead Moon Oracle deck by Luis Royo... As a collector's item, that is.

Royo's artwork in Dead Moon is what I'll describe as East Asian post-punk gothic rock that borrows imagery from Japanese samurai culture and imperial China, altogether with lots of blood, wild black hair, and intricate tattoos. And the consistent depiction of inclement weather in the backdrop.

In other words, awesome.

Sure, there's some hypersexualization and exotification of Asian women in there, but let's just agree that post-colonial social politics will be beyond the scope of this deck review.

Without question Royo's Dead Moon deck is one of the best on the market when it comes to art. It is an oracle deck, however, and not tarot in the traditional sense. As it is based on the I Ching, the oracle deck has 64 rather than 78 cards, each corresponding with one of the hexagrams from the I Ching. However, the Dead Moon I Ching deck is haphazard with the illustrations. They don't necessarily correspond with the hexagram it's supposed to represent. Other I Ching oracle decks, such as the I Ching Tarot by Kwan Lau, depict images that the illustrator believes represents the meaning of the hexagram. If that was Royo's intention, then it may have failed, at least for me.

For example, Hexagram 2, Kun, or Earth, represents stability, support, strength, fertility, nourishment, etc. It's a hexagram that reminds us to be calm and receptive to the natural world around us. In other I Ching oracle decks I've come across, Hexagram 2 is usually represented by a tree or a Mother Earth type figure. In the Dead Moon deck, we've got a half-naked forlorn looking woman who is kneeling, looking down. There may or may not be a waterfall in the background. It's an incredible work of art, no question, but perhaps not the most comprehensive image to symbolize Hexagram 2. Not to mention there are no words on any of the cards to suggest what the hexagram you're looking at is, other than the number. So either you know it or you don't. No hints, anywhere.

For instance, Hexagram 9, Shiao Chu, is about restraint and propriety. I just don't get that from the card's imagery. In fact, the woman on that card looks sexually inviting. Hexagram 11, Tai, is about reaping the fruits of your labor; success. Stunning artwork in Hexagram 11, but it makes no sense as applied to the meaning of Hexagram 11. Hexagram 22, Bin, is about grace and beauty. The image of the woman depicted therein kind of works for me but also kind of doesn't. If I didn't know the meaning of Hexagram 22 prior to encountering that card, I would not have guessed "grace and beauty." Maybe melancholy.

The deck did not work for me when I applied traditional I Ching divination techniques and it did not work when I applied it to my go-to tarot and cartomancy spreads. I know I said that that post-colonial social politics is beyond the scope of this review, but the scantily clad, sexually objectified Asian women were offensive to me. Aren’t we beyond that kind of antifeminist and racist behavior yet?

What’s more, to use Dead Moon as an oracle deck, the practitioner would need to be quite advanced and highly knowledgeable already of the 64 hexagrams. With no keywords, no card titles, illustrations that for the most part have little to do with the hexagrams, none of the symbolism of the original I Ching, and a barebones booklet that offers a shallow interpretation of Tao, if you don’t know the I Ching going into the Dead Moon, you won’t learn much about it after using the deck. Truth be told, I found the artsy-gothic-lots-of-sexy-Asian-women-and-hot-warriors deck of cards unappealing as a representation of the Tao, which I deeply regard.

Dead Moon is not a tarot deck in the traditional sense and will be a leap for tarot readers to use. So from a marketing standpoint, who exactly is Royo targeting?

The I Ching Dead Moon is going to be a favorite in any tarot/oracle deck collection. The art is beautiful and the dark ambiance of the deck is altogether thrilling. However, for me, that is where the Dead Moon’s purpose ends. It does not work for divination under either of the two esoteric paradigms it claims to be inspired by, tarot or I Ching. It is pretty to look at and that is about it.