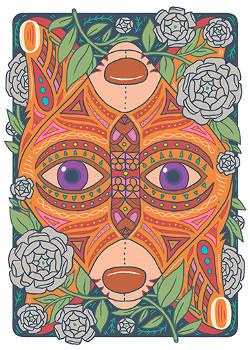 The Illuminated Tarot 'folds' the traditional 78 cards of a tarot deck into just 53 cards, by combining certain combinations of major and minor arcana cards together into one. The deck is constructed upon playing cards, and also includes a Joker card.


Card Images from the The Illuminated Tarot 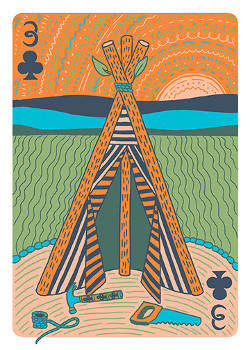 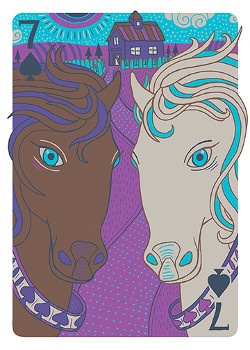 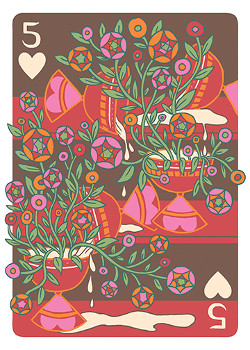 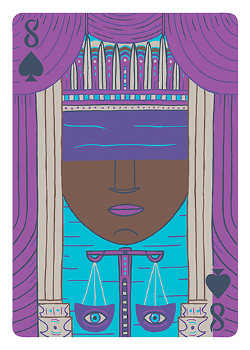 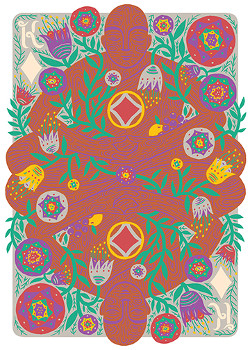 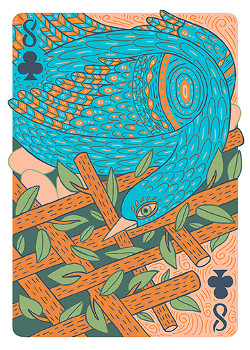 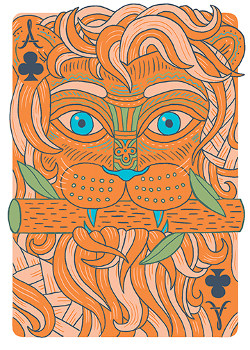 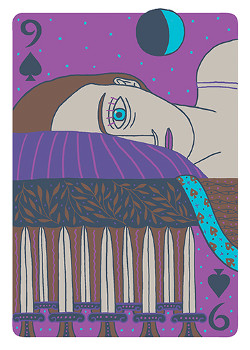 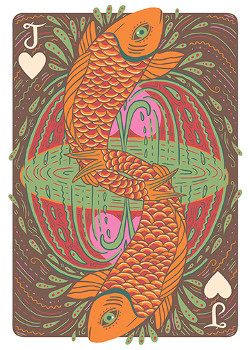 The Illuminated Tarot Review by Pixna

You might wonder how a “real” Tarot deck could consist of just 53 cards. That’s what I wondered too, until I got the deck and began using and studying it. The author “folded” the Majors and Minors together so that some cards do double-duty as either a Minor or Major or both, depending on how the reader wishes to interpret them or where the cards fall in a layout. In other words, you can give the Major/Minor cards as much weight in a reading as you like. But all the Minors (Clubs=Wands, Spades=Swords, Diamonds=Pentacles, Hearts=Cups) and all the 22 Majors are represented and accounted for, along with the very appropriate addition of a Joker card for the Fool. The Pages and Knights were blended into a single Jack, and this works quite nicely with combining the qualities of those two court cards into one. Each card has its suit symbol and either a number or court indication, but no words are used.

Author and illustrator Caitlin Keegan (an illustrator and pattern designer who lives in Brooklyn, New York) based this Tarot on a traditional 52-card playing deck, and it could work for such purposes if you like. But it can also be used just as you would any other Tarot. It actually makes perfect sense that the author designed the deck this way, since one of the theories about the origins of contemporary Tarot is that it evolved from a standard deck of playing cards. So although this seems like a giant leap away from what many people have come to accept as the quintessential Tarot -- a deck of 78 cards with 56 Minors (including four court cards and 22 Majors) -- this might be more of an “authentic” deck or perhaps a revisiting of Tarot’s past. So don’t let the uncommon construction of this deck put you off. It actually is a real Tarot -- just different from what you might expect.

The cards themselves are phenomenally designed. The size (3.5 x 5 inches) is perfect, despite their larger-than-normal dimensions. Because there are fewer cards in the deck, the larger size of the cards is extremely easy to handle. I have very petite hands, but I can shuffle (riffle or under/over) with ease. The finish on the cards is magnificent. There’s a heavy coating with a linen-like matte finish. This keeps the cards from showing fingerprints or dirt, making them easy to keep clean. The cards stick together a bit initially, perhaps because of the vertical “linen” lines in the finish. But the more you work with and shuffle them, the less this happens and the more they “soften” up and become “loose.” This is my ideal size and finish for Tarot cards, so I couldn’t be more pleased with them.

The backs are gorgeous and reversible. The colors are cream, black, and white. There are no gilded edges with this deck, which I’m very happy about, since that tends to flake off and make a bit of a mess on hands and reading cloths. The edges do initially “shed” a bit from where they were cut at the print shop, but that diminishes with use. There are moderately wide borders on the cards, but some of the artwork intentionally bleeds into them, so I wouldn’t suggest trimming the borders. They’re perfect just as they are.

The lavish illustrations are fresh, simple, and modern, but not precious or cloying, and the images have depth and inspire intuition. The colors are clear and distinct to each suit but create a well-coordinated family. Wands/Clubs: orange, green, and blue; Diamonds/Pentacles, soft yellow, burnt orange, violet/purple, green, and light brown; Hearts/Cups: red/pink, orange, brown, and green; Swords/Spades: blue, deep purple, violet, deep brown. As with any deck, there are some cards I’m greatly drawn to and others less so, but there aren’t any that totally turn me off. The artwork incorporates a combination of animals, plants, symbols, and ethnically ambiguous humans.

It can take a little time and study to understand why the author chose certain Minors to mesh with particular Majors, but her choices mainly follow and represent traditional Tarot concepts and make sense to me. In general, they’re paired based on conventional meanings/interpretations, numerical value, or energy/suit. What’s especially intriguing is that many of the cards, including the Jacks, are reversible (just like standard playing cards)!

The box is incredibly sturdy and beautiful, and it’s even embossed! It has an inner “cupped” holder to keep the cards secure and a ribbon to help pull them out. If you like to store your cards in a box or bag when they aren’t in use, you definitely won’t have to purchase anything additional.

The LWB is actually a small, full-color booklet with key words for each card and a few simple layouts. There’s not a lot of explanation of much else, which some readers might consider a good thing. I’d like to know more about the author’s reasoning behind certain Minor/Major matches and her use of color and symbols, but they are nevertheless clear and consistent among the suits.

This is a very easy deck to use and learn, and it’s one I’d recommend for both beginners and seasoned Tarotists. Although beginners might not get to know the customary numbers for the Majors by using this deck, it really may not matter, since all the Majors are represented here in a very unique and compelling way. One special advantage of this Tarot deck is that it will teach you how to read a regular playing-card deck should you ever need or want to.   It’s tough to come up with original approaches to Tarot, and most contemporary decks either stick with the traditional 78 cards or even add a few extra ones. This is the first time I’ve come across a full deck that takes a more “condensed” approach, but I must say that I’m impressed.

The Illuminated Tarot is a tarot deck that's been created using just the 52 cards of a standard playing card deck (plus a 53rd card for The Fool), rather than the 78 cards that usually comprise a tarot deck. I'm not a playing-card reader, but I am an avid tarot reader, so I wasn't sure how the deck would work for me. But the imagery on this tarot/playing card deck is so gorgeous--and the price so reasonable--that I was happy to take a chance on it just to see the images up close and personal. And they fulfill their on-line promise beautifully, in hand.

Bright, graphic, and personality-filled, the cards are a joy to look at. I assumed they would be standard playing card size, but in fact they are oversized cards. At 5" high by 3.5" wide, their proportions are closer to playing cards than to the taller, narrower standard tarot deck. Their generous size allows the viewer to see all the details of the artwork (which is a particular pleasure for someone with aging eyes).

So, how does deck creator/artist Caitlin Keegan get a full 78-card tarot into 53 cards? Very cleverly! First, she eliminated the four Knights, leaving her court cards as Jack (Page), Queen, and King. But all the other cards are there! Really! By making some very sharp connections between the Majors and the Minors, she makes 20 of the cards do double duty. For instance, the Ace of Wands is also Strength: that card illustration (did I mention clever?) shows a lion holding a wand in its mouth.

Some of the connections work better--that is to say, more immediately--for me than others, but all of them make me think, most bring a smile of recognition and understanding, and one, Seven of Swords/Chariot, brought tears to my eyes. (Not sure why. I do have thing for horses, though.) I won't list any of the other pairings, as it would spoil the fun of finding them for the first time yourself.

But you're not left to decipher the "translations" on your own. Keegan provides a beautifully designed, full-color "little white book," which reveals where the doubles appear. Her card meanings do not stick strictly to standard Rider-Waite-Smith meanings, but stray a bit here and there, perhaps toward Crowley, maybe toward playing-card divination. However, although I'm neither a Crowley-style reader nor a playing-card reader, I found the images expressed themselves clearly to me. (Still, the combining of images and meanings make this a deck best suited for experienced readers.)

I did a quick four-card reading for a friend, to test drive the deck, and WOW! It really delivered! So smart, so spot on, and so easy to interpret. I was surprised and impressed! And, like every deck worth its salt, it gave me new insights about the cards drawn.

Like the playing cards their graphic vibe borrows from, many of the cards are mirror-image reversible. And the suits are Clubs, Diamonds, Hearts, and Spades, rather than tarot's Wands, Coins, Cups, and Swords.

Deck and cards are housed together in a useful, beautifully designed hard-shell box that hinges on the left side. A ribbon lays across the well the cards lie in, to facilitate removing the cards.

My only disappointment is the card stock. It's too "paper-y" for my taste, feeling a lot like cardboard, rather than playing-card or tarot stock. However, I've riffle-shuffled the cards pretty thoroughly, and they held up just fine . . . so far. But for sure I'm going to purchase another copy. Just in case. And because it rocks.


Complete Details of The Illuminated Tarot


Similar Decks to The Illuminated Tarot