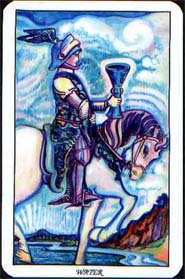 The Illuminated Tarot deck is another recoloured version of the Rider-Waite... but these are no ordinary colours. Every part of the scene glows with luminous brilliance. The cards live up to their name.


Card Images from the Illuminated Tarot 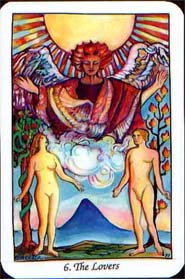 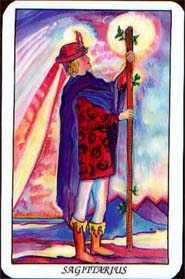 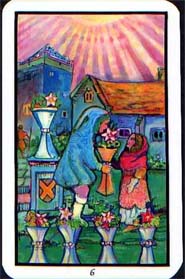 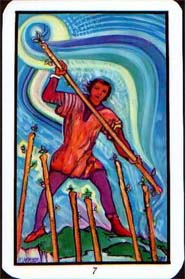 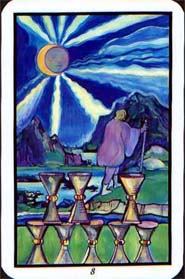 "Psychic and healing energy found its way into the cards. During the time I was painting, Neptune was conjunct the moon in my birth chart, perhaps the most psychic of all transits... Now that I look back I can see how this affected the energy of the Illuminated Tarot paintings that I was doing at the same time." Carol Herzer.

When I opened Carol Herzer's hand-assembled courier package it pretty much crackled with energy. The crackle might have been the little leafs of hand cut paper placed between small stacks of the hand-cut cards. Yet I have a clear memory of electricity. That's the best description I can give. As I unwrapped the cards, they felt electric. It might just have been static, but to me it just felt amazing. Psychic and healing energy indeed. Then, of course, I lost myself for hours in the stunning images on the cards. Carol took the symbolic foundations created by Pixie (Colman-Smith) and re-interpreted them from a modern, enlightened perspective. Every image is rippling with energy. Swords glow. Aura's surround everyone and every symbol. Waves of what I can only describe as "astral energy" ebb and flow from every inhabitant of the cards. The characters themselves seem more alive than symbolic. Illuminated may be the correct term, but I'd also add "inspired."

I found the Illuminated Tarot by Carol Herzer by "accident" although Carol was quick to point out "there are no accidents." In researching a novel, based on the Tarot, I studied some 500 decks, collected 112 personally. Then, I happened upon an article mentioning "hand painted" decks. I doubt it would have mattered if I liked the deck or not. I'm very much interested in anything crafted by hand.

I probably had low expectations, even though the images on Carol's website are truly beautiful. I have many "Waite-Smith" derivatives, clones and re-colorings in my collection. I have my own hand-colored Waite-Smith, an early exercise in Tarot visioning from some twenty years ago. So, I didn't expect much beyond a clearly professional interpretation of the Waite-Colman universe.

I knew something would be out of the ordinary when Carol began a series of emailed questions. "What card would you like on your pouch?" "On" my Pouch? What pouch? Carol explained she makes pouches by hand for her decks, then asked what colors I preferred inside and out. All very nice, but for the price I suppose you should expect such luxuries. The hand "Illuminated" deck is a cool $145, not small change, although I was anxious to spend my publisher advance. Isn't it funny how such a large percentage of income goes to tarot decks?

I'm not sure I understood the "card on my pouch," but I let Carol know my significant card is the Magician and that I also very much love The Fool. "It will take a week. I'll start painting tomorrow." Oh my. My expectations -- and excitement level -- certainly shot up with these words. A deck painted just for me?

Now, before I mislead anyone, Carol doesn't paint these right from scratch, just for you. She did indeed paint them over a two year period by hand in 1988 and 89, which was another nifty coincidence. This was the year I finished my completed draft of my tarot-themed novel. Expectations rose. The "hand painting" she was referring to is best explained in Geraldine Amaral's "Celebrating the Tarot", where Carol explained: "I can print decks as I need them, a few at a time. Before I send the cards out to be professionally laminated with the best lamination available I paint the iridescent colors in by hand." In other words, my new cards are "prints" of her original painted deck, then hand painted again with layers of iridescent colors, and hand cut, complete with rounded corners. It's all quite stunning. You can see the brush strokes. You feel the deck is "hand made" yet with artistry and painstaking hand-craftsmanship. Like I said, they crackle.

The card on the "pouch" turned out to be The Magician. He is one of her hand-painted cards, permanently affixed to the outside of the beautiful satin bag. And also in my pouch Carol enclosed a lovely poster of The Fool, remembering, I suppose, that The Fool was one of my favorite cards. She signed the poster and one of the cards.

Now, about the deck. Carol lets you choose traditional Strength/Justice attributions of Rider-Waite or the earlier Renaissance attributions. She has a version where she renames a few of the cards (call it Illuminated thinking), although you can decide which version you prefer:


The deck seems at once familiar, yet there's a soft flow to the images, no hard lines as we've come to know and love in Pixie's deck. There's much energy in the colors and swirls of energy and auras. Yet, for all that, Pixie shines through in "Illuminated" form. WIthout the hardness. And with much energy.

To put Illuminated to the test, I pulled out my old 1972 Pixie deck, the first deck I've ever owned. In more than 30 years, Pixie's never mislead me. Reads with those battered old cards are not only enlightening, they are accurate. So, how would Carol's deck fair? Pretty isn't always reliable (in relationships of any sort!)

I created something of a little test. An unfair one, I'll forewarn you, but I practice and intuit with cards, I don't just collect them. I took the three cards that represent the Mother letters in the Hebrew Alphabet, considered by many occultists to be the three elements above earth — air (The Fool), water (The Hanged Man) and fire (Judgement). In Carol's deck this became The Fool, The Unconscious and The Awakening, which seemed appropriate given they were the "mother letters." My little "ritual" became simply mating the twin cards from each deck and studying them side by side. Then, I shuffled the new Illuminated deck. I just wanted to see, if somehow, when I did a Celtic spread asking "What will our deck relationship be like?" of the new deck — would any of those three cards appear? Sounds silly, I know, but I was in a mystical, empowered mood. Well, this is very hard to explain, but as I shuffled, eyes closed, a card fell out. It was the Fool, which was the first of the "mother" cards, but also my personal card. Interesting. I re-inserted. Shuffled some more, a good long shuffle since I was mixing for the first time. The Fool fell out again.

When I spread the cards, Unconscious and Awakening appeared in the read. I was in a pretty good mood after that. I've worked the Illuminated cards rather a lot in the last few days with some startling clarity and results. The reads are beyond good. They are tapping right into my superconscious, or so it certainly seems to me. I've always been amazed by Pixie, but the new Illuminated is just as much a revelation, and a little more pleasant for meditation and inner journeying.

My favorite cards? That is so hard to choose. I think they're all stunning. You can meditate on a card a night, then start all over again, and see something new every time. The 9 of swords, rather a moody, despairing card in Pixie becomes quite a journey. You can see filaments of what appear to be a passing dream behind the hanging swords. The swords have auras around the hilts. It seems less despairing and more of a "wake up call" card in Illuminated.Yet, depending on the reading, I might see it entirely differently.

One of my favorite court cards in many decks is the Knight of Pentacles. I love this card in my Thoth deck as well, where he's a chariot-driving Prince of Discs. But in Carol's Illuminated, he becomes a mystical journeyer, and his Pentacle is glowing with dark energy. The Sun is unbelievable. The Empress seems quite alive, intensely so. The Ten of Swords, with the "exaggerated" ten swords plunged into the man's back, seen by many people to mean "disaster" takes on a new meaning, one I believe intended by Waite and Pixie. Pamela had painted that figure's "dead" hand in a gesture of "benediction" or blessing. But on a regular deck you'd hardly notice. The swirls of mystic colors on Carol's deck draw the eye to the all-important blessing.

In all, she's breathed new life into Pixie's masterpiece. I still love my Pixie. Nor is this a Pixie deck with plastic-surgery. Carol has re-interpreted the cards in a special and mystical way. It may not be for everyone, but if you like hand-painted and cut cards, specially made for you, simply crackling with energy -- and assuming you can justify a princely $145 (I'd argue a bargain, considering the work), then I highly recommend this deck. Not as a collector's piece, but as a deck to be used daily in meditation and for all purposes.