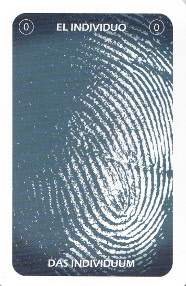 The Individuum Universal Tarot is an unusual 80-card deck merging tarot, Lenormand and Kipper cards. It has 22 perception cards corresponding to the major arcana, 56 minor arcana in suits of Teeth, Nose, Brain and Hands, and two Jokers. It uses mostly photographic scenes as imagery, with very few familiar tarot symbols. 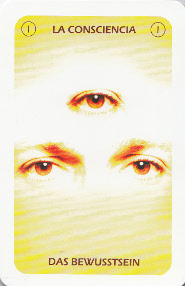 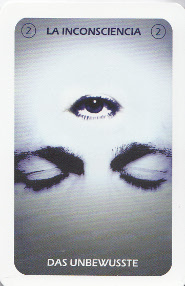 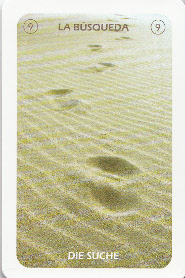 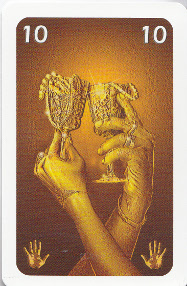 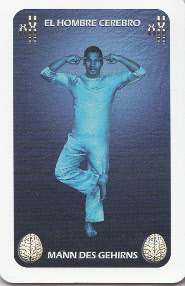 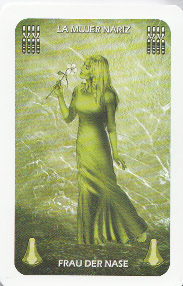 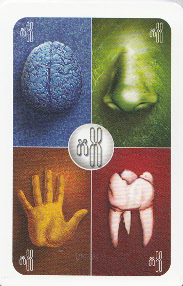 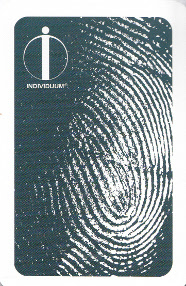 I want to thank my friend Mary Collin for sending me this deck – what an incredible find! The “Individuum Tarot” is a Spanish deck, with card titles in both Spanish and German. The accompanying LWB (Little White Book) is also in both Spanish and German. I know about ten words in each of these languages – none of which appeared in the LWB! ;-) The cards are incredible – but how was I supposed to make sense of them! Bright thought – Google the deck and see if there was a dedicated site! There it was – with translations in Spanish, German, French … and English! Hmmm … It appears that the marker for the English site is for the UK. Close enough! As you may have already surmised, this review is going to be a bit of a ramble, and largely based on material from the site. Not a problem … the site is very well done!

The landing page for the English translation starts out – “Individuum Universal – A world first”. Under that we see two inserts – one for your start sign (listed by modality), and one for faculties (Enlightenment, Prophecy, Creation and Healing). By clicking a your star sign, a page comes up showing the suit for each modality, a scan of each of the cards, and a short description.

From the site, for Aries, Leo or Sagittarius:

The teeth symbolize impulsivity, directness and spirit. This symbol rules over the will. Teeth star signs are Aries, Leo, and Sagittarius. The colour of the symbols of teeth is a rich, bright red. It reflects the cleansing power of fire and is the colour of sexuality and vitality. Furthermore, the teeth represent enlightenment, and embody the Leaders in the Man and Woman of Teeth. They are associated with the element of fire. Symbolic character of Teeth in the vernacular: “by the skin of your teeth”, “sink your teeth in”, “get your teeth into something”.

It is interesting how the cards are presented: the Ace, the four Court Cards, then the Pips (numbered cards), going from Ten down to Two. Clicking on a given card gives a larger card image, with a description of the card. A truly unique feature is that the page may be sent to a friend via e-mail, along with a short message from the sender. (I had to try this out – it works perfectly!)

From the site, for the Ace of Teeth:

Here potential describes sensual and physical performance. I develop my sensuousness to its fullest and find a creative framework for the concentrated strength that lies within my body. I don’t suppress or hide my emotions and talents but use them successfully. I show my lust for life and am courageous and reliable in everything that I do. My potential gives me vitality and self-confidence. I tread new ground and work on realizing innovative ideas. For me this means a phase of most intensive life experience, which takes me to a higher level of consciousness. Blockages and problem situations are eliminated, and my energy can flow freely again. My potential opens the doors to an exciting and successful life. I gladly pass on the overflowing energy I have within me to others. This way I feel joy, and I also benefit.

In the section labeled introduction, it is suggested that the cards can be used for meditation, to send via the Internet as messages, and communicate with them. It is noted that often one card says more than a thousand words. I don’t know why, but this paragraph is also translated into German on this page. It is note that the Individuum Universal cards can be used to play games, such as poker, Skat, Rummy and Canasta, Mus, Tute and Blackjack.

While the Individuum Universal cards can be used for fortune telling, such as Tarot, they also have associations for all other oracle cards, such as the Lenormand or Kipper cards. There are links to charts that give the card associations for the Rider-WaiteTarot, Lenormand, Kipper, and standard card games.

The Character cards (equivalent to Court cards). are defined on a spiritual level:


On a body level, the Character cards are defined as:


The Major Arcana (cards 0-22) are referred to as the Perception cards. They are used to recognize and describe things that the individual encounters within a lifetime. The Mystique cards are the two Jokers – one male, one female - in the deck . The male/female designation is done through a graphic os the X/Y chromosome structure.

The section on Tarot shows the images of all 22 Major Arcana cards. Clicking on the card brings up a larger image, and a description of the card. The titles are as follows:

The Red, Green, Blue and Golden links lead to a description of each of the suits: Red/ Teeth (Wands), Blue/Brain (Swords), Green/Nose (Cups), and Gold /Hands (Pentacles).

The Fortune telling link leads to three interactive online readings: Ask the daily oracle, Time fusion reading, and Partner reading. I had to play, of course! It was great fun – and two out of three readings agreed with my take on life. ;-) The link for card games leads to the game entitled “Memory”, which is intended to act as a facilitator for developing memory. The object of the game is to match cards. If a card does not match the first card drawn, then it is turned back over and another cards is drawn. Memory is developed as the players “remember” where each card is place, so that they can draw matching cards.

Now that we have the foundation for this deck, we can get to the cards. The presentation for this deck is stunning – they come in a black box, with a clear plastic sleeve. There is a blank black card covering the deck and LWB, so that the Tarot icon, web site link, and fingerprint, which are all done in silver on the top of the plastic sleeve, show up well.

The cards are 2 ˝” by 3 ľ” – perfect for smaller hands (like mine!), and of good quality card stock. The card backs have a Ľ” white border, with a black background in the main section. The Individuum icon is in white in the upper left hand corner, a white “fingerprint” covering the rest of the card. The backs are not reversible.

The two Jokers show all four icons on the card face, with the male or female chromosome structure in the middle of the card. The same two figures (one male, one female) are shown throughout the deck, and in the same cloths. The difference is the color of the suits. For the Man and Woman cards, the figures make their suit evident: the suit of Hands shows them holding up their hands, the suits of Teeth, Nose and brain shows them pointing, respectively, to their teeth, nose and head. It sounds silly, but it comes across better in the images. There is no esoteric, astrological or Qabalistic imagery in this deck.

The Ten of Hands is an interesting card, showing two hands, each holding a golden cup. Without any knowledge of this deck, I would immediately think this was the two of Cups! I love the card for the Individual (Fool), which is a fingerprint. Conscious (the Magician) is also thought provoking, showing a pair of eyes, with a third eye in the Third Eye position. In this card all of the eyes are open. In the Unconscious, we see the same imagery, with two eyes closed, and the eye in the Third Eye position open. The Search (the Hermit) is very much a “footprints in the sand” type imagery.

This deck is based on the traditional Rider-Waite structure, although the imagery is not, and literally everything has been renamed. On the site for the deck, there is an emphasis on using the cards not only for Tarot reading, but for other oracle reading, and as playing cards. The LWB shows the traditional Celtic Cross spread, but it also shows the very interesting Time Fusion reading. A great deal of care has been taken to build a site that will enable individuals to use this deck in a very empowering manner. It appears that to order this deck, you would have to go through the site, in a language other than English (the English “Shop” link does not work). If you are willing to step outside the envelope, I feel that this could be a very interesting deck to work with.