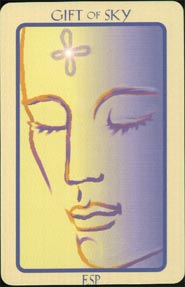 The Infinite Tarot is a deck inspired by elemental energies and titled a Tarot, but really isn't one. The Infinite Tarot has no major arcana, instead having four suits of nineteen cards each. The suits are named Earth, Sky, Water and Fire.


Card Images from the Infinite Tarot 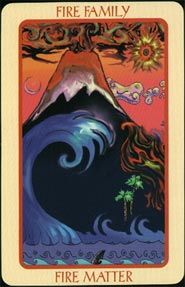 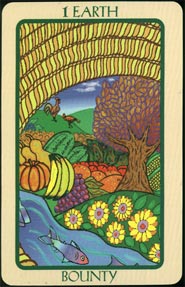 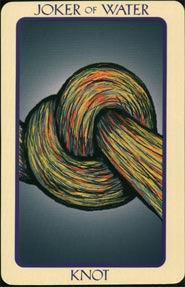 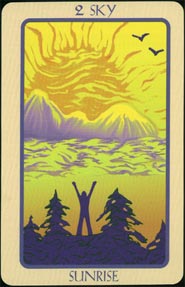 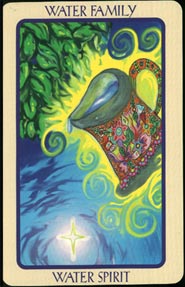 While titled a tarot deck, it really isn't one. The Infinite Tarot is an oracle inspired, according the artist Rachel Ritter, by impressions of elemental energy and images conceived during a moment of self-reflection.

The Infinite Tarot only has 76 cards and no major arcana, instead having four suits of 19 cards named Earth, Sky, Water and Fire. The deck has a high ace card and a one card in each suit, and includes a joker and gift card, as well as the more usual king, queen and number cards.

The Infinite Tarot was independently published in the US. It is noticeable when handling the cards that they are less glossy than typical decks from the major publishers. (But as an advantage, they don't slide all over the table).

Each card is a painting, a central scene, surrounded by a thin line in the colour of its suit and a thicker cream-coloured outer border. The position and title of the card is printed at the top and bottom, in the same suit colour.

The backs of the cards are purple and white with a stylised flower and sky design. The artist does not give meanings for reversals, and says in the booklet that interpretations do not change even if the cards are reversed.

The paintings are idiosyncratic, often abstract two-dimensional paintings with a varying amount of detail, depending on whether the cards represents a concept or something concrete. The artist has used a wide range of colours throughout the deck (and often on the same card). Some cards are completely practical, including modern objects such as telephones, memos, a compass; others are abstract, almost surreal.

The art is a little amateurish, but gives a warm and fuzzy feeling during readings. The 64-page white booklet packaged with the cards reinforces that with its ethereal, motivational interpretations. It offers keywords and ample explanations for each card, with a half page or more devoted to each individual interpretation.

While not a tarot deck for everyone, the Infinite Tarot will appeal to people looking for a positive, spiritual and modern oracle deck.