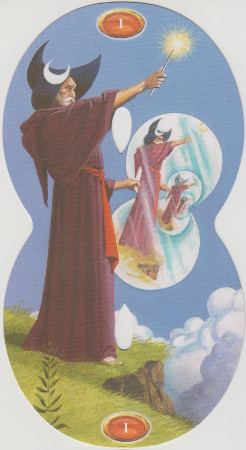 The Infinity Tarot has 78 cards in the shape of the infinity symbol (a figure eight on its side). The cards are illustrated in an 18th century swashbuckling style, and the unusual shape allows for a different perspective on the tarot imagery.


Card Images from the Infinity Tarot 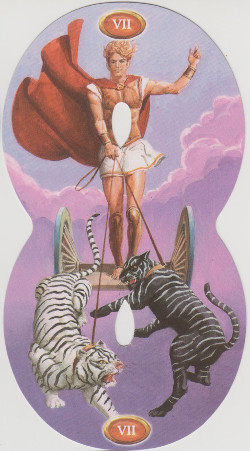 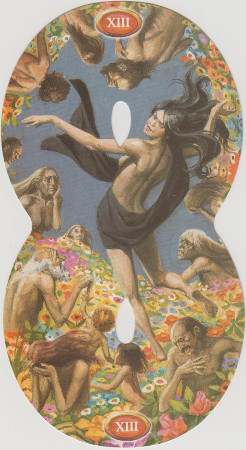 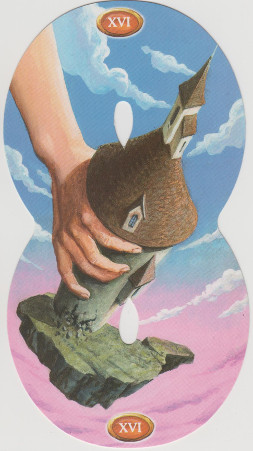 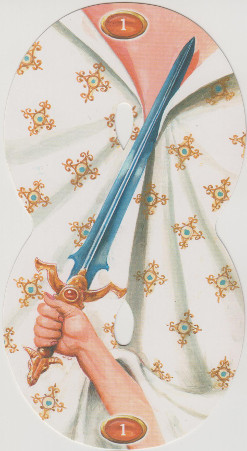 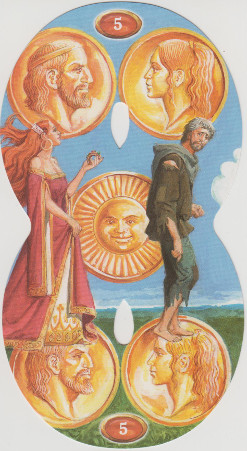 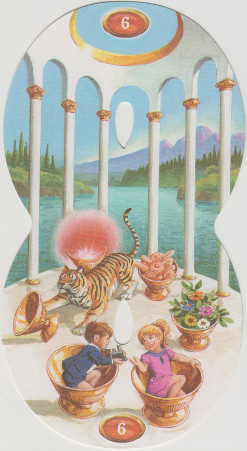 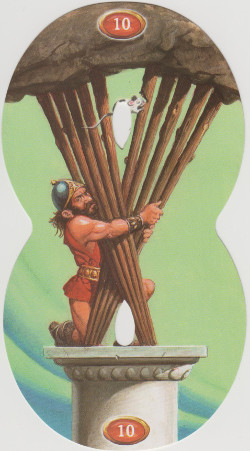 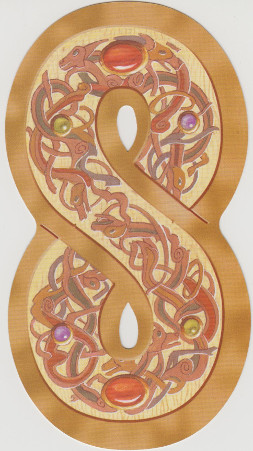 The Infinity Tarot is a figure 8 shaped tarot deck created to resemble the cosmic lemniscate – two tear-shaped cutouts on each card help create the illusion of a flat circle. With the idea that the past and the future have no beginning or end, and each is a moving part of the other, the concept of this tarot deck is an interesting physical representation of a philosophical/occult idea. On the mundane plane the execution is fairly standard – a 78 card fully illustrated deck that can be read with cards both upright and reversed.

This is a belle-laid (beautiful-ugly) tarot. Its subject matter varies from myths – classical Greek and Egyptian mythological figures – to fairy tale figures such as wizards, sorceresses, knights, heroes, and princesses – and some bizarre anomalies such as the bowler hatted gentleman who adds a touch of Steampunk, and the odd demon – scarcely fitting in with the more romantic and historical imagery. Some cards are quite wholesome and innocent, but there is an underlying atmosphere of malice to this deck – and some images are out right baleful: the sinister expressions on the faces of The Fool, The Hermit, Death, Temperance, The Star, as well as the monstrous beings depicted as Justice and The Devil. The malevolent vibe is more contained in the minor Arcana, but for the suit of Swords. A maleficent Queen holds a gigantic sword; in the 3 of Swords elemental monsters clash weapons, and in the 7 of Swords, a truly foreboding image, a swordsman steps from a gap in a wall, in a hallway lined with paintings of men bearing swords, as a young woman walks towards us, unaware of the peril behind her.

The Major Arcana is 22 cards, with no titles on the cards, only Roman numerals. According to the information given in the Little White Book this is a standard Major Arcana with no renamed or re-conceptualised titles. The Minor Arcana is 56 cards of four suits – Swords, Chalices, Wands, and Pentacles. Each is a suit of 10 cards and 4 Court cards – King, Queen, Knight, and Knave.

The cards measure 145 x 79 mm, and as mentioned before, is shaped like an infinity symbol or flat circle. The card stock is good – it is light, low sheen and a smooth, so the cards, in spite of their unusual shape sit in the hands comfortably, and shuffle well. The cards are a little flexible, but they will not withstand heavy handling without sustaining damage.

The artwork is colourful, though the colours are quite flat – the backgrounds tend to be unmodified solid blocks of matte colour. Sky blue, infernal red, grass green, butter yellow, musk pink, and teal are the dominant colours in the Infinity tarot, with a naturalistic palette used for the central figures. The art style itself is reminiscent of a faux classical style (reminiscent of encyclopaedia illustrations), with lots of neoclassical poses struck by the models in the images.

There are no borders on the images, and the numbers are contained in a small lozenge at the top and bottom of each illustration. The design on the back is a Celtic knot work of what seems to be hounds, but is quite abstract an unclear. It appears to be reversible, but close inspection reveals that this in fact is an asymmetric design. The packaging is shaped to fit the figure 8 shaped cards. It is a solid cardboard box with a lift off lid wrapped in black, printed with silver titles and stars, and images from the Infinity Tarot itself. A red ribbon inside helps the card user lift the deck out. All in all this is an attractive presentation.

There are no descriptions of what is happening in in each image, which is a little frustrating because some scenes are a little obscure. It is always nice to know what the artist is actually intending to associate with the inner meaning of each card. The divinatory meanings are for upright cards only, and are predicated on the querent’s voyage towards the Infinite. The definitions given fall within the bounds of standard accepted meanings, and they are progressive and modern.

This is a rather unique and original tarot with an unusual appearance. If you are looking for a tarot deck with elements of fantasy and fairytale, myth and magic then this is an ideal deck for you. If you are looking for a deck with an unusual appearance or something a little striking then the unusual shape and eye-catching, bright colours of the Infinity Tarot are certainly worth checking out. This is a deck that experienced users will find it easy to master, and even learners will find its images fairly simple to work with.