The Inner Visions deck has 48 paintings, based on the visions of artist Jean Thornton. The meditational and divinatory cards are designed to be an esoteric tool that acts as a key to the subconscious and inner being. Packaged in a set with a 92-page book.


Card Images from the The Inner Visions 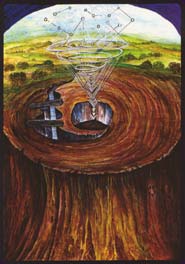 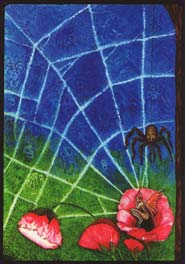 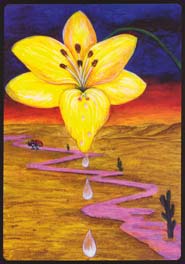 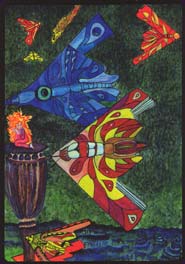 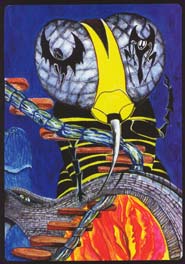 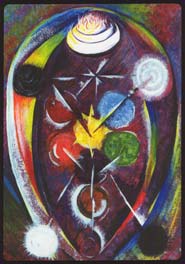 The Inner Visions Review by Solandia

“Inner visions are a set of meditational come divination cards, based on the inner visions of Jean Thornton. This is the first set of cards produced by Jean to act as keys to the subconscious mind to re-awake or rouse the slumbering souls within each individual who chooses to work with them.”

The are 48 evocative cards in the Inner Visions deck, untitled and un-numbered cards painted in strong, even chaotic-looking, acrylics, sometimes with a base of watercolour. The paintings are an expansion of Jean’s original stick figures drawn on the bus during a visionary, hallucinatory experience, come to fruition in an art class years later.

Corresponding with the elements of Earth, Air, Fire and Water through the colours used, the Inner Visions cards also correspond with the twelve house positions on the astrological wheel (not in a zodiacal or planetary sense, the book explains, but in the influence of house positions). The cards have titles like The Fire Box, It’s All There In Potential, Moving House, Winning by Skilful Means, Twin Souls, A River of Tears, Acceptance, The Green Door, A Frozen Situation, The Assessors, The Fairy Ring, and Sleeping Treasures, to name a few.

The art varies from the abstract and surreal to the head-achingly busy and clashing, to pretty and scenic. There are flowers and snails, giant flies, monsters and multi-coloured beings, combined in scenes that are dreamlike in their juxtaposition. There are small details in the cards with significant meanings, like the tiny spider in the “Make Hay While The Sun Shines (Not...)” card that could be a face or a fantasy. The position of trees also have meanings – located to the left represents the past, to the centre is the present, to the right represents the future. The ‘facial’ image of the tree depicts the general mood of the card.

The cards come with a 92-page bound book with glossy, white pages, also by Jean Thornton. It has some information on the deck’s genesis, how to deal the cards and on meditation, and most of the book contains the card meanings. Each card is listed in the book in the order it was painted, alongside a small black-and-white image. The first picture is titled The Fire Box.

The cards are intended for meditation in particular, but can also be used for individual readings in any way that you desire. They are glossy and laminated, and quite a large size – 10.5cm wide by nearly 15cm tall - so can be propped up against an altar or easily displayed. They have thin black borders around the face of the card, and the backs have a multi-coloured Qabalistic tree design.

No titles or numbers on the cards helps with their use for meditation, but does make it hard to look a card up in the book until all of the imagery is familiar. Nonetheless, I found the Inner Visions deck gave some very interesting readings, and it’s interpretations are unlike any Tarot or Oracle deck I’ve come across before. In Jean’s own words...

“These cards are esoteric tools to acquire an element of wisdom, knowledge and understanding from within the depths of the their inner being. In potential, everything lies within the mind of man. May these keys unlock doors and reveal the contents of your inner being for you to explore to the full.”


Complete Details of The Inner Visions


Similar Decks to The Inner Visions