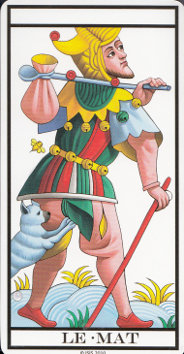 The ISIS Tarot de Marseille is based on the Conver Marseille from 1760. The ISIS (Institute of Study on Initiation and Symbolism) version updates the traditional cards to include more three-dimensional imagery and Japanese aesthetics. 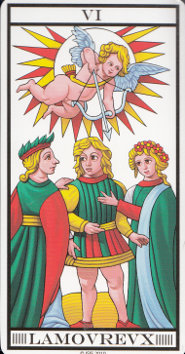 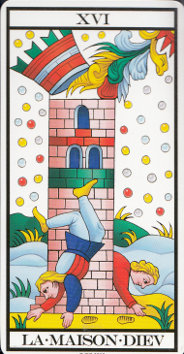 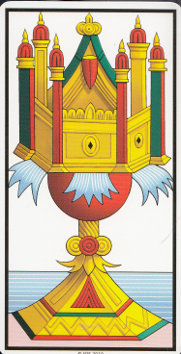 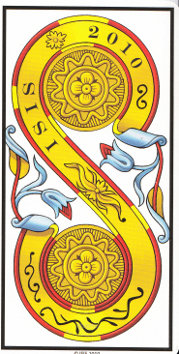 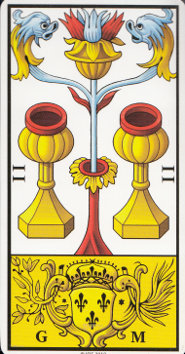 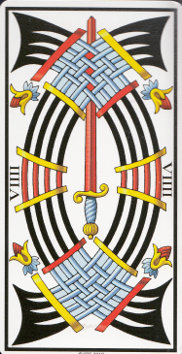 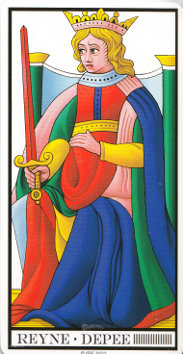 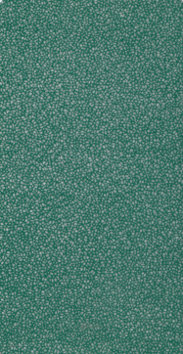 I want to thank Alec Satin for bringing this deck to my attention. I saw he scans on his blog, and “had to have it”! I purchased the deck directly from Mr. Onuma, with not a little trepidation, because I was not that sure how well Japan’s postal system had recovered from their recent devastating tsunami difficulties. I need not have worried – it came through in record time, and in excellent condition!

The “ISIS Tarot de Marseille” is a traditional, 78 card Marseille-style deck, based on the Nicholas Conver Marseille deck (1760). Where the Conver deck was made from wooden block prints, and therefore appears two dimensional, the ISIS deck is three dimensional.

There was no LWB (Little White Book) with this deck, but there was an informational card that reads as follows:

”The Tarot de Marseille is part of a World Heritage in which a spiritual tradition of Southern Europe has successfully been preserved and cultivated since ancient times. It is like a museum on paper where mystical wisdom from ancient Egypt, the Orient, Greece, India and the Celtic and Jewish traditions can be found hidden in symbolism. It is you who will discover the inherent value that resides within the cards.

The oldest Tarot de Marseille can be traced back to the beginning of the 17th Century. It is said that Francois Chosson’s 1672 version defined the basic structures of this particular tarot, and all versions of the Tarot de Marseille after that one include the following characteristics:

1. The proportion of the card is always the equivalent of two equilateral squares joined.

2. There are frames at the top and bottom of each Major Arcana card, containing a Roman numeral at the top and the name of the card in French at the bottom.

3. The number frame for the Le Mat card is blank and the Arcana XIII has no name frame.

4. Each image is depicted in a geometrical composition consisting of three circles, two squares, two triangles and two pentagrams.

One hundred years after Chosson, the Conver version was published in 1760. In the 250 years since, it has become the de facto standard of the Tarot de Marseille.

A wealth of esoteric teachings are embedded in the composition, colors and numbers of this tarot. The colors of the Conver version are green, blue, red, yellow and light blue, symbolizing respectively, earth, water, fire, air and ether of the 5 elements, plus flesh. The ISIS version restores these colors as faithfully as possible.

The Conver version was made with wooden block prints, representing each image two dimensionally. The ISIS version presents the images in third dimension. The ISIS version includes contemporary technology and Japanese aesthetics, making it the most beautiful Tarot de Marseille in the world.”

The cards are approximately 2 ˝” by 5”, and the card stock is study and will stand up to use. The backs are a small patterned green, and are reversible.

The card faces show a Ľ” white border, followed by a thin black line. The Major Arcana show the card number, in Roman numerals, at the top, with the card title across the bottom in French. The Pips (numbered cards) show the card number, in Roman numerals, centered on the left and right hand side of the card. The Court cards show the title and suit across the bottom. As this is a Marseille-style deck, the imagery on the Pips is limited to the suit icon and minimal embellishments.

The Fool and Strength have an interesting added detail of a bee prepared to sting! What I noticed immediately was the eyes in this deck – they stand out int hat they are focused in a definite direction, and they add emotion to the figures on the cards.

Several of the cards in this deck retain traditional markings: the Two of Deniers (Pentacles) shows the year of publication and the publisher. The Two of Coupe (Cups) shows a Cup in a yellow background at the bottom of the card, the the initials “G” and “M” to the left and right of the Cup as it faces the reader. Le Chariot shows the initials “V.T” on the chariot, between the horses. The Valet de Deniers is labled with the word “France” on the left hand side of the card, and he words “Conver Valet.de.Deniers” on the right hand side of the card.

I liked the feel of this restoration. The added dimension to the cards, along with the intensity of the color, makes for some very pleasant reading experiences. I would not hesitate to recommend this deck for any level of student/reader – there is something for everyone here. I also feel that it is an especially good deck for someone new to the Marseille tradition.